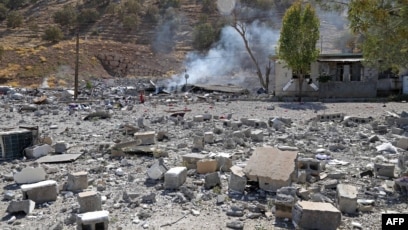 Saudi Arabia on Thursday has strongly condemned the Iranian attacks on the Kurdish region of northern Iraq.
Iran’s Revolutionary Guards said they had fired missiles and drones at militant targets in several Kurdish sites, killing over a dozen people.
“The Ministry of Foreign Affairs has expressed the Kingdom of Saudi Arabia’s strong condemnation of the Iranian attacks on Kurdistan Region of the Republic of Iraq, killing and wounding a number of innocent people,” the Kingdom’s Ministry of Foreign Affairs said in a statement.
“The Ministry of Foreign Affairs reiterated its total rejection of all attacks that threaten the security and stability of Iraq, stressing the importance of the international community standing up against all Iranian violations that contradict international laws, charters and norms,” the statement read.

The Kingdom also expressed its deepest sympathy and condolences to the government and people of Iraq.
Thirteen people were killed and 58 wounded in the attacks near Irbil and Sulaimaniya in Iraqi Kurdistan, Iraq’s state news agency said, citing its counter-terrorism service in Kurdistan.
Iran’s elite military and security force said they would continue targeting what it called terrorists in the region.