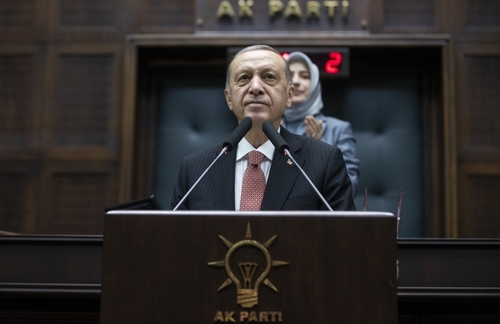 “The operations we carry out with planes, artillery and UCAVs are just the beginning,” he remarked yesterday (November 23) at the parliamentary group meeting of his Justice and Development Party (AKP).

“While continuing our air operations without interruption, we will come down on the terrorists in the land as well, at the most appropriate time for us,” he said.

Türkiye on November 20 launched airstrikes in an area stretching from northwest Syria to the Kurdistan region in Iraq’s north. The government said the strikes were in response to the deadly bomb attack in İstanbul a week earlier, for which Türkiye held the Kurdistan Workers’ Party (PKK) and Kurdish groups in Syria responsible.

Türkiye has also been carrying out artillery strikes on northern Syria since Sunday, hitting more than 400 targets, according to a statement from the National Defense Ministry yesterday.

Hours after Erdoğan’s remarks, the US Department of Defense has expressed concern over the military escalation in northern Syria and Iraq, saying that the recent strikes “directly threatened the safety of US personnel.”

The personnel was “working in Syria with local partners to maintain custody of more than 10,000 ISIS detainees,” according to the Pentagon’s written statement.

The Al Hawl camp in Syria’s east, near the border with Iraq, which hosts thousands of former ISIS members and their families, was reportedly among the locations that Türkiye’s warplanes hit.

Two days before the airstrikes, the US consulate in Kirkuk, Iraq had issued a security alert about “possible Turkish military action in northern Syria and northern Iraq in the coming days.”

“We condemn the loss of civilian life that has occurred in both Türkiye and Syria as a result of these actions and offer our condolences,” the statement further said.

“We are also concerned by reports of the deliberate targeting of civilian infrastructure.

As we call for de-escalation, we recognize Türkiye’s legitimate security concerns. We will continue to discuss with Türkiye and our local partners maintaining ceasefire arrangements.”

On November 13, a bomb attack in İstanbul’s popular tourist area of Taksim killed six people and injured 81 others.

Türkiye claimed the PKK and the Kurdish groups in Syria had orchestrated the attack, citing statements of some suspects. Those groups denied involvement in the attack.

In the early hours of November 20, Türkiye launched airstrikes in the north of Syria and Iraq, targeting Kurdish groups.

Some 70 aircraft hit 89 targets, with 44 targets at a depth of 20 kilometers into Syria, the government announced.

On the same day, a rocket was fired from Syria near the Öncüpınar border crossing in Kilis, injuring eight security personnel. The Afrin Liberation Forces (HRE) claimed the attack.

The next day, a mortar attack targeted the border district of Karkamış in Antep, killing three civilians. No group claimed responsibility for the attack.

The National Defense Ministry announced on November 23 that it had hit more than 400 targets in four days in artillery strikes.

‘I’m critical of the Turkish government. I’d be ashamed of myself if I kept quiet,’ says former Zaman columnist
NAT 24th November 2022
Submit an Op-Ed
Tweets by NewsAboutTurke1