Labor and Freedom Alliance to announce candidate for presidential elections

Labor and Freedom Alliance to announce candidate for presidential elections 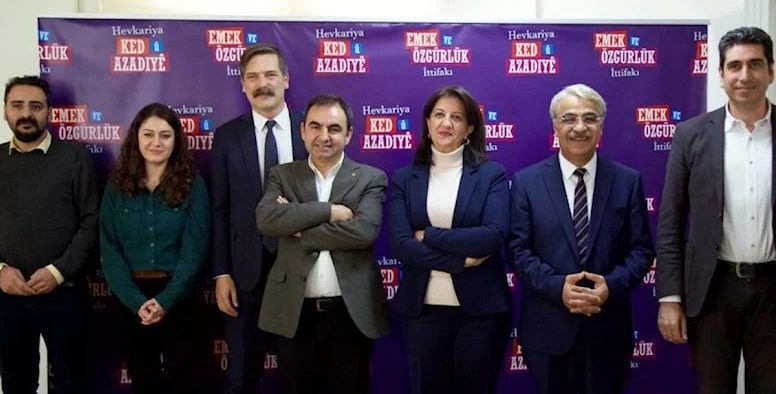 Turkey’s third big alliance formed by six leftist opposition parties including the pro-Kurdish HDP (Peoples’ Democratic Party) said on Tuesday it will designate a joint candidate after long consultations, in the upcoming presidential elections which President Erdogan said will be held on May 14.

The alliance convened on Tuesday for talks on the elections, the election process and the ballot box security, and said in a statement that it still did not completely close the doors to “direct dialogue and open negotiations” to act together with the main opposition Nation Alliance.

“We will announce the name of our candidate, based on our principles, in the light of the results of our negotiations and working mechanisms with the largest labor and democracy forces,” the statement said.

The alliance, which was formed by the HDP, Workers’ Party of Turkey (TIP), Labour Party (EMEP), Labourist Movement Party (EHP), Social Freedom Party (TOP) and Federation of Socialist Councils (SMF) declared its foundation last year for “equality, freedom, fraternity, peace and democracy for the Turkish society.” It is also known as the “third alliance” after the ruling bloc’s People’s Alliance and opposition’s Nation Alliance.

Thousands of followers of the alliance recently gathered in where the party leaders asked the people to raise hope ahead of elections.

Previous Article
“I remind Swedish government that Allah is one and his army is Turkish”: Bahçeli
Next Article
Russia, Syria restore air base for joint use in Northern Syria

Russia, Syria restore air base for joint use in Northern Syria
NAT 24th January 2023
Submit an Op-Ed
Tweets by NewsAboutTurke1