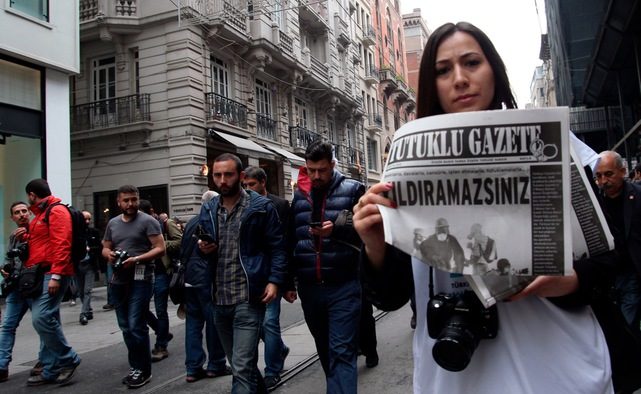 This statement was originally published on freeturkeyjournalists.ipi.media on 8 February 2019.

This article is part of “Turkey Dispatches”, a special IPI series on press freedom and the realities of practising journalism in today’s Turkey, written by those most directly affected: Turkey’s journalists and those who defend them.

Journalism in Turkey is getting harder by the day. State-led censorship, a punitive regime and the hounding of the opposition characterize the environment for the media. Even using the simple phrase #journalismisnotacrime can attract hostility, a fact that sums up the current state of the nation.

Hundreds of journalists have been incarcerated for the act of producing objective journalism and for criticizing the ruling Justice and Development Party (AKP) and President Recep Tayyip Erdoğan, according to International Press Institute (IPI) research. Holding them captive between four walls for months on end is an attempt to restrict their voices and imprison their thoughts. While some are sentenced to years in prison for doing their job professionally by reporting the news and uncovering the truth, others have been forced to move thousands of kilometers away from their country, home and family.

Despite all these difficulties and restraints, there are still tenacious journalists in Turkey with their finger on the pulse continuing to uphold the tradition of a free press. Still, with their every move, news report or publication, they are only ever a heartbeat away from state oppression.

Female journalists have become a particular target, not only due to their rejection of the traditional role meted out to them by the mentality of a male-dominated state, but also because they are dissident journalists. Female journalists are frequently threatened by state security forces and also subjected to sexist insults and attacks. One of the most striking examples is the weekly Saturday Mothers’ sit-down protest, which now by necessity takes place in front of the Human Rights Association of Istanbul (İHD). The action has taken place in this location ever since its 700th week, when it was banned from Galatasaray Square, an area which is now heavily blockaded by the police every Saturday.

Journalists try to fulfill their duty and record images while hemmed into a tight area with the Saturday Protesters on one side and the security forces on the other. Every Saturday without exception, female journalists face psychological and physical attacks, derogatory remarks and threats. Aside from the verbal and physical harassment from the security forces, journalists say they are prevented from doing their jobs freely.

Eylem Nazlıer, a journalist with the newspaper Evrensel who regularly follows the protests, described her experiences: “We are assaulted and threatened. In recent weeks, the Saturday Mothers’ protests have been attacked and the security forces have prevented journalists from recording any images. When I reacted against this, I was threatened by a police officer who had no hesitation in saying, ‘We’ll talk to you later.’ This kind of thing happens all the time.”

Gülfem Karataş, a journalist and news commentator who worked for years at IMC TVbefore it was closed down by statutory decree, painted a similar picture.

“I don’t know any journalist working in the field who hasn’t been subjected to violence from the security forces,” she said. “All of us have to deal with violence, but the actions against female journalists are based more on derogatory remarks and a display of supremacy.”

A report published in March 2018 by the Journalists’ Union of Turkey (TGS) Women and LGBTI Commission highlighted the prejudice and violence experienced by female journalists working in the male-dominated media environment. According to the report, women working in the media encounter discrimination, psychological abuse and harassment due to their gender. In the survey, 61 percent of women reported experiencing intimidation, 59 percent bullying, and 17 percent actual physical violence. The report also noted that female journalists in Turkey do not receive equal pay for equal work and are forced to leave their careers early due to the burden of childcare, which falls completely on their shoulders. Consequently, for many women marriage and motherhood signal the end of their careers or have a negative influence on their progression.

One of the common problems faced by female journalists is sexist attacks. Like other women in general, many female journalists said they had experienced at least one sexist attack in the street, workplace or another area of life. Out of 168 women who responded to questions on the nature of the violence they had faced, 61 percent said they experienced psychological abuse, 54 percent verbal abuse, 17 percent physical abuse and 15.5 percent sexual harassment.

Female journalists face a number of challenges on the ground in attempting to do their job in a heavily male-dominated media environment. In some cases, for instance, they are ostracized from reporting locations by the shoving and jostling of male colleagues. Female journalists employed in jobs that require more physical strength, such as camera operator or photographer, get worn out much more quickly when working in the field. In addition, male journalists are barely aware of what their female colleagues often perceive to be a crude and combative approach to work in the field, constantly trampling over one another and obstructing others. The harsh reality is that while it may not all be intentional, it has become an inseparable part of the job.

Evrim Kepenek, an editor at the website Bianet, said that the male-dominated mentality in the media is also seen in coverage of content. “Masculine media is not just reflected on the streets, but also on the screen,” she said. “Men who keep murders of women off the news agenda, and who have never reported on even one story on this issue, invite popular male journalists to discussion programmes to chat about the topic. Some professional areas open to men are completely closed off for women, who are placed in relatively ‘softer’ areas like education and health.”

A united response to repression

Praising the work of the Turkish Union of Journalists Women and LGBTI Commission, Bianet editor Evrim Kepenek says that female solidarity is demonstrated through concrete actions. Female journalists in the TGS, for example, follow the court hearings of their imprisoned colleagues and are at the forefront of organizing solidarity actions throughout the legal process.

Despite all the oppression in the system and the mentality of male supremacy, female journalists in Turkey continue to pursue their careers. They endure harsh conditions in order to bring truthful and objective news to the widest audience possible. They continue to do their job, make their voices heard and resist the ready-made female roles moulded for them at home, in the streets, in the workplace and in all areas of life.

Views expressed in this article are those of the author and do not necessarily reflect the views of the International Press Institute.