Turkish Defense Minister Hulusi Akar said today the S-400 Triumf system would be rolled out in the Autumn in defiance of US military chiefs, who warned on Tuesday the move would have “grave consequences” for US/Turkish relations. He explained: “The deployment of S-400s will begin in October and the Air Force is studying, in which regions it is better to deploy them.” In a nod to Washington, Mr Akar insisted the acquisition of Russian air defence systems was not “Turkey’s preference, but a forced measure”.

He insisted the surface-to-air missiles were needed “to protect the country’s population.”

Mr Akar said Ankara and Washington were “continuing their negotiations on the delivery of US Patriot air defence missile systems to the republic.”

Russia and Turkey agreed a deal in respect of the missile system in September 2017, with Turkish President Recep Tayyip Erdogan confirming his country had made an advance payment in accordance with the contract.

In mid-June 2018, a source in military and diplomatic circles told Russia’s state news agency TASS Russian defence enterprises had been assigned the task of completing production of S-400 surface-to-air missile systems in May 2019 prior to their delivery to Turkey. 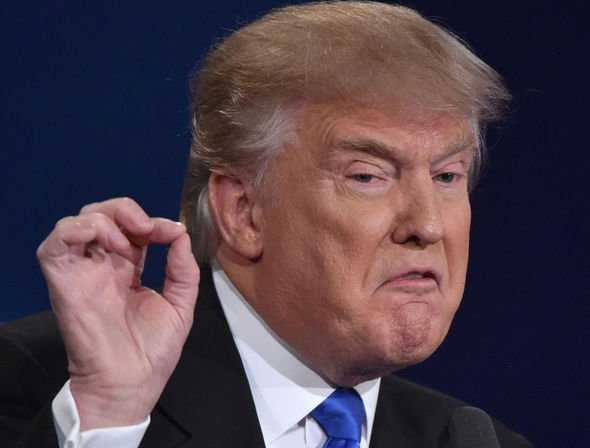 The decision is likely to anger US President Donald Trump (Image: GETTY)

It is designed to destroy aircraft, cruise and ballistic missiles, including medium-range missiles, and can also be used against ground installations.

The Triumf system’s 40N6 long-range surface-to-air missiles, which have a range of 400 kilometres, are capable of hitting hostile jets and even hypersonic cruise missiles, and travel at more than half a mile a SECOND.

Speaking earlier this week, Pentagon spokesman Eric Pahon said: “Turkey’s acquisition of the Russian S-400 air defence system will have grave consequences for the US defense relationship with Turkey.”

Russia’s S-400 missile system will be deployed in Turkey in October (Image: GETTY)

He said the US was “working to help Turkey find better solutions to address its defence needs while also warning of the broader implications of purchasing Russian S-400s”.

Last month, Mr Trump cancelled the transfer of 100 F-35 jets to Turkey in a clear indication of the increasingly fractious relationship between the two countries.

Speaking last week, US Defence Secretary Pat Shanahan suggested Turkey might be forced to choose between the two systems.

He said: “My position is that the S-400 and F-35 are incompatible – meaning that they don’t go together.

“We want to find a solution that makes the F-35, for a strategic partner, a critical asset in their military.”

The strengthening of ties between Russia and Turkey comes at a time of deteriorating relations between Moscow and the West.

Turkey’s relationship with the West has similarly deteriorated, largely as a result of perceived human rights abuses and the country’s military operations against Kurdish militia in Syria.

Mr Akar’s announcement comes just days after it was revealed Russia was also training military staff from China, which has also acquired the system, to use it in a move which will also concern NATO chiefs.