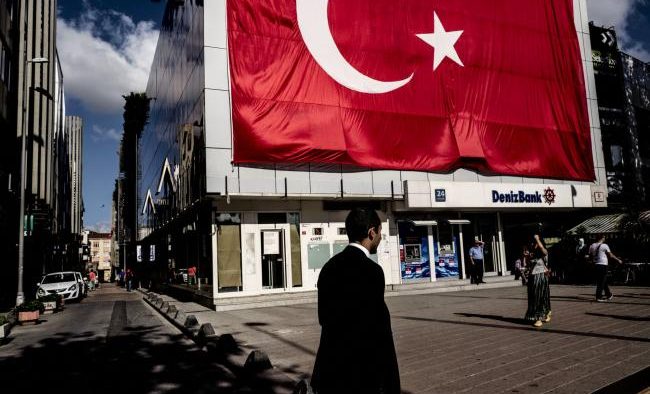 So far this year, the policy maker has been spared habitual verbal beatings from the growth-oriented president. But investors worry that as growth tanks before municipal elections later this month, the central bank will come under pressure to kick off an easing cycle sooner than warranted by the shaky inflation outlook.

It’s not hard to see why: the economy faces an uphill climb, one probably unprecedented in an Erdogan era that’s been largely characterized by China-like growth rates. Real banking credit shrank by 7.2 percent on a quarterly basis in the last three months of 2018. Industrial production capped 2018 with its biggest plunge in more than nine years, and economic confidence languishes near the lowest level since the 2009 global crisis. Turkey’s largest companies have either completed or sought almost $24 billion in loan restructurings.

But by easing too soon, the central bank may sacrifice price stability in favor of revving the growth engine with easier credit, repeating a mistake made frequently in the past in Turkey, according to analysts.

The central bank will probably start monetary easing next quarter and will deliver more than 450 basis points of cuts by the end of the year, according to estimates in a Bloomberg survey. The lira’s two-month forward implied yield suggests the market is pricing a rate decrease of around 50 basis points as early as the next meeting on April 25.

“The central bank doesn’t have room to maneuver,” said Guillaume Tresca, a senior emerging-markets strategist at Credit Agricole in Paris. “It has to keep real rates high in order to restore credibility.”

The conditions are now set for monetary easing: the economy is in a recession and inflation is slowing. We expect the central bank to cut rates by a total of 550 basis points this year, starting in June.

Facing bellwether municipal elections on March 31 and annual inflation still near 20 percent, the government has resorted to battling price pressures through unconventional means, cracking down on hoarding and selling discounted food directly to consumers. In a parallel effort to revitalize growth, it’s heaped pressure on state banks to ramp up lending, which turned annualized credit growth positive last month for the first time since August. It recapitalized three of its lenders by selling bonds to the unemployment fund, and is working on a fresh plan to further bolster state-owned banks’ capital.

Yet these measures constitute temporary fixes and the government will have to take more structural steps if it wants to find a permanent solution to the bleeding.

“The administration should not rely on the central bank to revive the economy by lowering interest rates, but finally start delivering on its pledges to implement structural reforms,” said Piotr Matys, a strategist at Rabobank in London. When local elections are out of the way, “foreign investors will expect the administration to make significant progress.”

Failure to do so is likely to reignite selling pressure on the lira at a time when confidence among households and businesses is low, Matys said. Turks appear to be bracing for lira weakness, boosting their domestic holdings of foreign currency by more than 10 percent to a record $171 billion over the past six months.

Investors aren’t very optimistic either, with lira options traders at their most bearish since October, as indicated by the premium they pay to sell the currency compared with that to buy. Inflation will probably take the brunt of any easing, with analysts expecting the figure to be above 17 percent at year end, more than triple the central bank’s 5 percent target. The policy maker’s forecast for the year is 14.6 percent.

Treasury and Finance Minister Berat Albayrak said the silver lining is that the worst is behind Turkey and the economy is on track for a rapid recovery. Rising exports and tourism income will be the key drivers for growth, he said on Twitter on Monday.