Turkey and views on the Kurdish struggle

Turkey and views on the Kurdish struggle 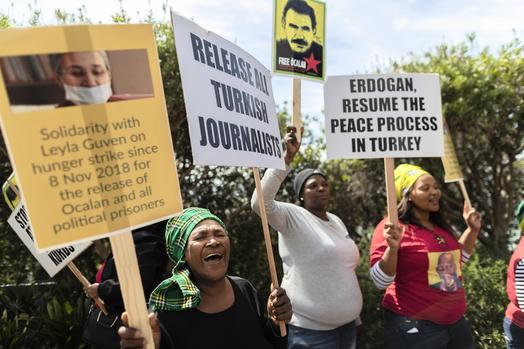 Cosatu and SACP protest outside the Turkish Consulate in Cape Town in support of Leyla Guven, who is on a hunger strike in protest against the isolation of Kurdish leader Abdullah Ocalan. Picture: Nic Bothma/EPA-EFE

I am writing about the op-ed by Shannon Ebrahim titled “#InternationalWomensDay: Solidarity with Leyla Guven

” published on IOL on March 8.I am compelled to express my regret and disappointment that Abdullah Öcalan, who is personally responsible for the deaths of 40 000 innocent civilians, including women and children, over the course of 30 years, was given the spotlight and praised on a day that should be about honouring the struggle of women.

It is an injustice to women that the top article on IOL about International Women’s Day glosses over the truly commendable efforts of women who strive for equality, freedom and justice everywhere, and uses this day as a pretext to manipulate public opinion to support a terrorist.

It is my duty to remind you and your readers that PKK, of which Abdullah Öcalan was leader, is designated as a terrorist organisation not only by Turkey, but also the EU and many countries around the world, while the claim Öcalan was abducted by Turkish intelligence at Nairobi airport is false, since he was caught in the Embassy of Greece, a fellow NATO ally, in Nairobi, holding a Greek Cypriot administration diplomatic passport.

More unfortunate is the comparison of Abdullah Öcalan to Nelson Mandela, which is not only misguided but also disrespectful to the people of South Africa, the land of genuine freedom fighters and to Madiba’s legacy of peace and human rights.

The treatment of Kurds in Turkey was never based on racism or ethnicity. Kurds have never had to go through different doors marked “Turks/Kurds”, and they have never experienced legal segregation. Setting aside many commonalities between our countries, drawing parallels between South Africa and Turkey on this matter is a fantasy.

Such attempts to resurface archaic mistreatment scenarios should never overshadow real stories of the emancipation of women in face of hardship in Turkey, South Africa and beyond.

I would like to congratulate all women around the globe, regardless of their origin, be it Kurdish, Arab, Palestinian, Rohingyan, Uyghur, African or other on International Women’s Day.

Ambassador of the Republic of Turkey in South Africa

Response to the Turkish Ambassador:

It is a pattern in history that often when a government wants to curtail the rights of its opponents, or a minority ethnic group fighting for equal rights, it labels them terrorists.

In South Africa, we know this all too well. By depicting those fighting for their rights as terrorists, governments use draconian laws to violate their human rights against international law.

It has always been convenient for Turkey to label the Kurdish Worker’s Party (PKK) as a terrorist organisation as it tries to justify its gross violations of human rights against members of the organisation, and it deems any form of Kurdish opposition as having an affiliation with a terrorist group.

In September 2017, a Brussels court ruled that the PKK was not a terrorist organisation, but a party in the civil war in Turkey, and said the Turkish-Kurdish conflict should be viewed as an armed struggle. This view was confirmed by the Belgian High Court.

Unfortunately, the Ambassador’s letter has tried to deflect attention away from the essential point of my Women’s Day column, which is about the hunger strike of Leyla Guven, which has now gone on for 124 days.

The Ambassador doesn’t respond to the fact that hundreds of other Kurdish political prisoners in Turkish jails have gone on hunger strike in solidarity, calling for an end to Ocalan’s solitary confinement, which has gone on for years, and the refusal of the Turkish authorities to allow him visits from family or lawyers, nor even letters or phone calls.

What about the women on hunger strikes all over the world to call for the immediate release of Ocalan, and the 50 Nobel Laureates who have done the same?

For the record, Ocalan was not abducted by Turkish intelligence agents in the Greek Embassy in Kenya but intercepted while being driven from the Greek ambassador’s residence to Nairobi airport, from where he was to fly to South Africa, where then-president Mandela had offered him asylum.

Ocalan’s abduction was in complete violation of international law, as was his subsequent torture and continuing inhumane treatment.