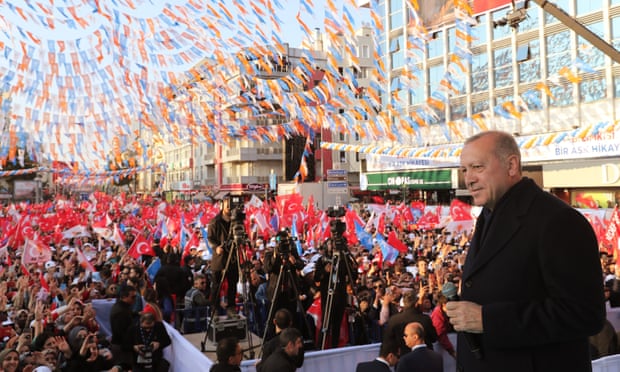 The battle waged by Turkey’s Recep Tayyip Erdoğan against currency speculators is a classic pyrrhic victory. The show of resolve by the self-styled strongman on Wednesday stopped investors from dumping the lira but at enormous cost in both the short and long term. That Turkey will be damaged is beyond question. All that’s in doubt is how severe that damage will be and whether the fallout will be felt elsewhere. Looking at the fragile state of the global economy, there’s every chance it will be.

The backdrop to the latest instalment of a long-running crisis is that Erdoğan is this week facing important local elections at a time when the Turkish economy is in recession. In an attempt to drum up support, Turkey’s president last week condemned Donald Trump’s decision to recognise Israeli control over the Golan heights, but this proved a spectacular own goal by convincing foreign investors that Ankara was on a collision course with Washington. The lira plunged.

Erdoğan’s response was to stop speculators heading for the exit by preventing foreign banks from getting access to the lira they needed to close out their positions. This halted the run on the currency but at some cost: borrowing costs soared, as did the cost of insuring Turkish debt against default. The stock market plunged by 6% in its worst day for almost three years.

The plan is to lift the restrictions once the weekend elections are over, but the damage is already done. Turkey relies on foreign investors to fund its large current account deficit so burning their fingers is not the smartest long-term strategy. Interest rates will stay higher for longer, deepening the recession and slowing the pace of recovery. A full-blown run on the lira cannot be ruled out.

The assumption in the financial markets is that Turkey is a one-off and that there will be no ripple effects. That, though, is what the markets always say. But the global economy is slowing, central banks have shelved plans to raise interest rates, investors are prepared to accept negative yields for the security of holding German bonds and the yield on a 10-year US bond is below that on a three-month bond – in the past a signal of a recession in the offing. Sometimes it only takes a spark and Turkey could easily provide it.

Brexit gloom is spreading from companies to consumers if the latest snapshot of the high street is to believed. Recent hard data from the Office for National Statistics has suggested that individuals carried on spending in the first couple of months of 2019, but the CBI says its monthly survey suggests the mood became a lot more cautious in March.

Given the deadlock at Westminster and the daily warnings of impending Armageddon, it would not be entirely surprising if consumers have started to rein in their spending. Even so, there are reasons to question whether things are quite as bleak as the CBI’s distributive trades survey suggests.

For a start, the UK has a record employment rate, the lowest jobless rate since the mid-1970s and wages are growing faster than prices. Those factors probably have more of an impact on spending patterns than Brexit.

What’s more, while retailers reported that sales were down on a year ago, that was because Easter and Mothering Sunday were earlier last year, boosting spending in March. Sales for the time of year were actually stronger in March than they were in February, rising to a 10-month high.

Trade talks between China and the US resume in Beijing this week and on the face of it news of the unexpectedly sharp decline in the US’s monthly trade deficit came at an opportune moment. One reason why shares on Wall Street have been rising since the turn of the year is the sense that the White House is eager to do a deal, and a smaller US trade deficit should make it easier for Trump to adopt a softer line.

This all looks a bit premature. Trump is unlikely to be swayed by a single month’s figures, especially when they have a tendency to gyrate wildly. Nor was there any real evidence that the smaller deficit was the result of China opening its markets to US goods under protectionist pressure. The deficit narrowed because of a sharp fall in imports, which suggests that the US economy is slowing. Will that make Trump more likely to be more emollient? Seems unlikely.

Tags:
Previous Article
Without papers, Uighurs fear for their future in Turkey
Next Article
Markets in a spin after Turkey ‘fails’ emerging market stress test