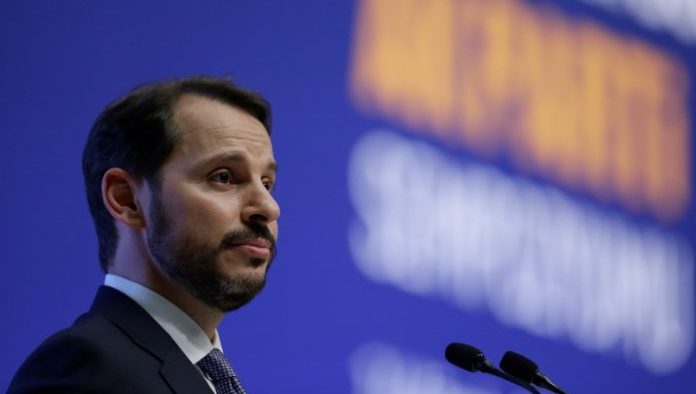 Turkish Finance Minister Berat Albayrak said on Tuesday he expects more sharp interest rate cuts from the central bank, which should bring down inflation, and pushed back against investor concerns over government interference.

Speaking a week after Turkey’s central bank stoked concerns about its independence by delivering a sharper than expected rate cut, Albayrak said the bank makes data-based policy decisions and has entered an era of easing rates.

At a rare press conference, the minister also acknowledged the budget deficit would be higher than the 1.9% target by year end, although less than 3%, and, contrary to many economists, predicted the recession-hit economy would grow in 2019.

The lira weakened slightly on Albayrak’s comments before recovering. It stood at 5.5745 against the dollar at 1144 GMT, 0.7% firmer than Monday’s close after hitting its strongest level in nearly four months.

Turkey’s economy tipped into recession after a currency crisis last year, which was its worst in nearly two decades and sent inflation soaring to above 25%.

The central bank responded with aggressive policy tightening that remained in place until Thursday, when it cut its key policy rate to 19.75%, from 24%, and set the stage for more.

“With the serious loosening of interest rates in Turkey in the recent period, and based on the fact that the interest rate trend will come down more clearly and strongly in the coming period, we have entered a period of interest rate cuts,” said Albayrak, Turkish President Tayyip Erdogan’s son-in-law.

“We need to express this here: the central bank makes its monetary policy and interest rate decisions based on its data set.”

The rate cut was Turkey’s biggest since at least 2003, and it was the first policy decision under new bank governor Murat Uysal, who took the reins after Erdogan sacked former governor Murat Cetinkaya three weeks ago.

Erdogan, who has long urged lower rates, said he made the move because Cetinkaya did not follow instructions on interest rates.

Albayrak said that although the government would miss its target budget deficit-to-GDP ratio, set in the depths of last year’s crisis, debt levels were not a problem for Ankara.

The central government budget recorded a deficit of 78.58 billion lira in the first six months of this year, official data showed. The government’s forecast for the 2019 year-end deficit is 80.6 billion lira.

In what were seen as efforts to plug the deficit, parliament passed a law earlier this month opening the way for the central bank to transfer its legal reserves to the treasury.

Addressing criticism of the law, Albayrak said there was nothing unusual about the process.

“When you look at the central bank balance sheet, you can see very clearly that changing the place of one component does not remotely have anything to do with printing money and that this is completely within normal economic activity,” he said.

One of the worst hangovers from the crisis is up to $20 billion in debt that energy and construction sector companies can no longer afford to service that sits largely on Turkish banks’ balance sheets.

Earlier this month, Reuters reported that efforts to clean up the debt have stalled after initial plans for restructurings were put on hold.

Albayrak said the government will not compensate losses. “The private sector will conduct this process by themselves. There is no such thing as: ‘The government should do this, compensate losses’,” he said. “We will equally support the demands of all sectors.” (Reporting by Nevzat Devranoglu; Additional reporting by Ali Kucukgocmen, Ezgi Erkoyun, Can Sezer, Ebru Tuncay, Behiye Selin Taner and Ceyda Caglayan in Istanbul; Writing by Jonathan Spicer; Editing by Dominic Evans and Kirsten Donovan)

Tags:
Previous Article
Turkey moves to oversee all online content, raises concerns over censorship
Next Article
Turkey’s demand for a Syria buffer zone is about oil, not terror

Turkey’s demand for a Syria buffer zone is about oil, not terror
NAT 1st August 2019
Submit an Op-Ed
Tweets by NewsAboutTurke1