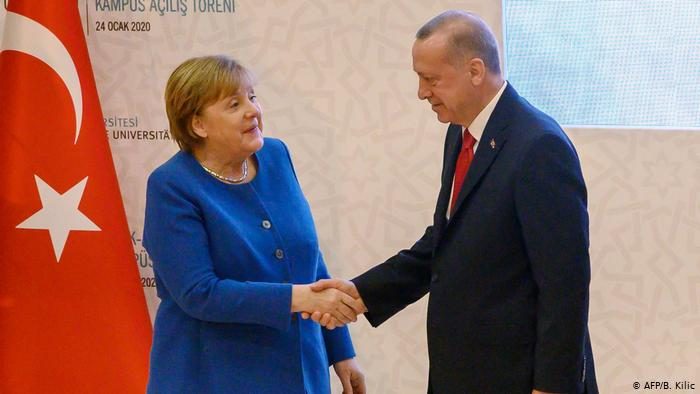 The opposition in Germany has it easy: It can simply insist that Chancellor Angela Merkel get down to brass tacks with Turkey’s strongman president, Recep Tayyip Erdogan. This is what high-profile politicians including MEP Alexander Graf Lambsdorff, of the business-friendly Free Democrat Party, have demanded. And he is right on the facts: Human and civil rights are trampled upon across Turkey. Erdogan cheerfully interferes in the civil wars taking place in Syria and Libya. And yet Lambsdorff is well aware of the Faustian bargain the Turkish ruler has made with the European Union, and especially Germany: the refugee deal, in place since 2016.

If Erdogan opens the borders into the EU, hundreds of thousands of new asylum-seekers could quickly stream into the bloc. This is one of the reasons why, during her visit to Istanbul, the chancellor praised her host for accepting into his country millions of Syrian refugees from civil war: “It is an achievement that cannot be overestimated and deserves thanks and recognition.” What Merkel leaves out is that Erdogan does this less for humanitarian reasons than for financial reasons. He collects billions for comparatively appalling refugee accommodation.

Nevertheless, the autocrat from the Bosporus keeps threatening to open the locks. For years, that is how he has countered criticism about oppression of the Kurds and alleged Gulen supporters inside and outside Turkey, as well as arbitrary arrests of journalists. The displaced people in Turkish camps are Erdogan’s all-purpose weapon, against which Merkel is powerless. In order to at least polish up this unsightly image, the latently blackmailable chancellor does what she is particularly good at: She packs her messages in charming words.

The perfect stage for this was the inauguration of the Turkish-German University campus in Istanbul during her current visit. Merkel recalled that during the Nazi era, German scientists and artists found a safe haven and place of work in Turkey. Who could hear this and not think of how, today, great numbers of Turkish intellectuals, journalists and military officers have been fleeing to Germany from Erdogan’s regime?

Merkel’s criticism between the lines

Of course, the German leader is well advised not to use her speech at the university for a general statement on the undemocratic nature of Turkish politics. Instead, she uttered platitudes, within which those with a gift for reading between the lines could clearly decipher her real message. “This campus stands for cosmopolitanism and open-mindedness for the future of the students” — in other words, that state of affairs does not apply to Turkey as a whole.

Did young people understand the message? One can only hope so. Erdogan’s ruthless quashing of any dissent or critical voices has been on full display for many years, and encouraging words from a prominent visitor from Germany will not change that. With her quiet criticism, Merkel bestows comfort on the students. And Erdogan ignores the minor spikes and continues business as usual. Erdogan, Merkel and various dignitaries at the joint opening of the Turkish-German University in Istanbul

Erdogan benefits from the civil war in Syria

In the long run, however, relying on charming words is not enough — at least if you want to be taken seriously as an advocate of democratic values. However, German politics continues to suffer from this even after this meeting between Merkel and Erdogan. And that won’t change anytime soon, given the increasing number of displaced persons in the Turkish-Syrian border area.

Erdogan can count on continuing to do good business from the misery of persecuted people — both financially and politically. Shortly before her departure from Istanbul, the chancellor announced a benevolent review of additional funds for the construction of shelters for asylum-seekers in northern Syria. Turkey has established a controversial “safe zone” there, not only for those fleeing civil war from the neighboring country, but also to persecute and displace Kurds.

A high price, politically and financially

With her offer, which is to be welcomed for humanitarian reasons, Merkel is therefore operating on shaky ground. Understandably, people in need do not care who pays the cost of alleviating their misery. It is quite possible that Germany will take over a large part of the bill so that Erdogan keeps the borders to Europe closed. Once again, that would be a high price — politically and financially.

Turkey And Russia Fight It Out: Is This The End Of The Road For Erdogan?
NAT 23rd February 2020