Turkey’s state banks sold about $44bn of hard currency in the first four months of this year and some $77bn since the beginning of 2019 to support the lira, according to central bank data and the calculations of four bankers.

Two of the bankers estimated more selling took place in May to boost the Turkish currency and offset an outflow of funds amid the coronavirus pandemic, bringing total sales this year to more than $50bn.

The foreign exchange (FX) interventions by state lenders have heightened investor concerns over a drop in Turkey’s foreign currency buffer as its economy tips into a sharp downturn.

The calculations and estimates are based on the central bank’s latest data. The bankers, who requested anonymity due to the sensitivity of the matter, previously estimated state banks sold at least $32bn as of March.

Its governor, Murat Uysal, said last month that fluctuations in reserves were normal and temporary in such periods of stress.

Finance Minister Berat Albayrak has said the bank may intervene to reduce volatility in the currency.

The lira has outperformed most emerging market (EM) peers this year, even while it is down 15 percent against the dollar and hit a record low in May.

Adding to market concerns, Turkey’s external debt obligations are nearly $170bn over the next 12 months.

Hunting for extra foreign funding, the government this month sealed a deal with Qatar to triple a currency swap line to $15bn, helping to raise the central bank’s net FX reserves to $32bn last week.

Local swaps obscure the true level of reserves, analysts say. “But if they keep burning reserves at the current pace,” the new funds from Qatar will also be indirectly spent to boost the lira, said Cristian Maggio, head of EM strategy at TD Securities in London.

Kerim Rota, a founding member of Turkey’s new Future Party, which opposes President Recep Tayyip Erdogan’s ruling AK Party, said he calculated interventions of more than $11bn in April alone, and $77bn in the past 16 months.

These “backdoor” interventions diminish Turkey’s transparency and reputation, and turn away foreign investors, Rota, a former banker, said on Twitter.

Albayrak, who is Erdogan’s son-in-law, said on May 5 that developing economies accumulate reserves in part “to provide liquidity to markets during such difficult times”.

Tags:
Previous Article
No cause to party in Turkey with Q1 growth of 4.5% y/y overshadowed by “ominous” outlook for Q2
Next Article
Russia and Turkey Risk an Ever-bloodier Stalemate in Libya 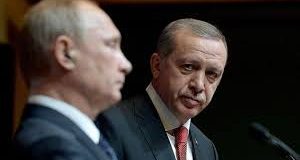