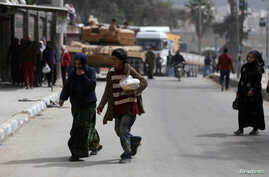 HUMAN-rights organisations in Afrin, northern Syria, have warned of an escalation of war crimes and kidnappings after eight more people were taken from a village earlier this week.

Mr Eliko, Mr Hisen and Mr Abdullah were returned after a ransom was paid, but the others are still being “held hostage by the Turkish state,” according to Kurdish officials.

They warned of further kidnappings by Turkish-backed militia in the region, with women being the main targets,

At least 500 cases have been reported since Turkey’s illegal invasion and occupation of the largely Kurdish Afrin region, codenamed Operation Olive Branch, in 2018.

In late May, images emerged of a torture camp where mainly Yazidi women were held by the Hamza Brigade militia.

They were subjected to torture, rape and sexual assault by their captors over a two-year period.

Turkey has been accused of building a “terror state” in northern Syria.

Allegations that Turkish forces carried out chemical attacks on Afrin’s civilian population in February 2018 have been denied by both Ankara and Washington and calls for investigations have been ignored.

A United Nations report published in March suggested that terror groups are guilty of the “war crimes of hostage-taking, cruel treatment, torture and pillage.”

More than 300,000 people have been internally displaced, sparking suggestions that an ethnic-cleansing operation is under way.

Dozens of individuals and organisations signed a statement condemning “the murder, femicide, looting and invasion perpetrated by the Turkish state against the Kurdish population, especially the violence perpetrated on the women of Rojava.”