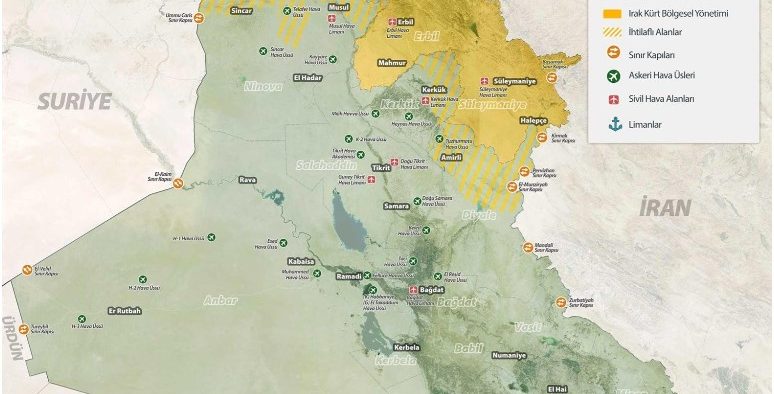 ISTANBUL: A map posted by the official Twitter account of the Turkish Presidency drew an angry reaction from Baghdad because it showed a divided Iraq.

The map, which was deleted after criticism, was intended to illustrate the locations of Turkish troops that have crossed the border and advanced up to 40 kilometers in 38 areas of Northern Iraq. However, it highlighted the northern part of the country in yellow and the rest in green. It also revealed that Turkish forces were deployed in the cities of Erbil, Soran, Duhok and Zakho.

“If you share such maps, you will then legitimize other official sources who share maps of a divided Turkey,” said Aytun Ciray, a Turkish opposition politician from the IYI Party, emphasizing the need for respecting neighboring Iraq’s territorial unity.

The row over the map follows the launch of two major operations against the Kurdistan Workers’ Party (PKK) in mid-June in northern Iraq, dubbed Claw-Tiger and Claw-Eagle, which were criticized by Iraqi authorities. A fifth Turkish soldier has been killed during the ground offensive, Turkey’s Defense Ministry announced on Sunday night.

The PKK is listed as a terror group by Ankara, Brussels and Washington. The group allegedly uses about 81 locations in northern Iraq as bases from which to launch attacks in Turkey.

Baghdad considers the presence of Turkish troops a “blatant breach of the UN charter” and said it is concerned about the safety of “unarmed civilians” during Turkish operations. Iraqi Foreign Ministry spokesman Ahmad Al-Sahaf said on July 3 that the country might file an official complaint with the UN Security Council (UNSC) if Turkey does not halt its military activity in the north.

He added: “We reject any unilateral action that would harm our sovereignty. We started with a statement of condemnation and may resort to gathering support from the Arab League and the Organization of Islamic Cooperation and could file a complaint to the UNSC.”

Ryan Bohl, a regional analyst with the Stratfor geopolitical consultancy, suggested that the release of the contentious map was an attempt by Ankara to signal to Iraq, as well as the PKK and the international community, that it intends to maintain its current level of operations for some time.

“That in and of itself is a strain with Baghdad, since Iraqi Prime Minister Mustafa Al-Kadhimi can’t necessarily count on the operation winding down and going back to a status quo,” he said.

However, Bohl added that the withdrawal of the map shows that Ankara does not want to be viewed as a permanent occupying force by Iraq or its allies.

“(Turkey) wants northern Iraq to be seen as different than its spheres of influence in Syria, which are signaled to be much longer term,” he said. “So Ankara is trying to walk a fine line between showing that this operation will be more significant than previous ones against the PKK, but trying not to make it appear like it will be an occupying or permanent force in northern Iraq.”

Lesson from Tunisia: Political Islam is not the solution
NAT 2nd August 2021

Leaving Afghanistan is a huge US mistake
NAT 2nd August 2021

Lesson from Tunisia: Political Islam is not the solution

Leaving Afghanistan is a huge US mistake