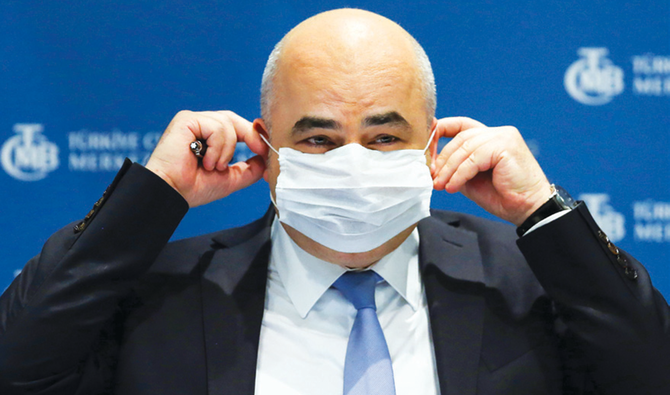 Turkish Central Bank Governor Murat Uysal has sought to downplay fears over the bank’s FX reserves, and did not address a 1.5 percent drop in the lira this week. (AFP)Short Url

ISTANBUL: Turkey’s central bank, under pressure from rising prices and a volatile drop in the lira, ratcheted up inflation forecasts on Wednesday, but its chief remained optimistic that disinflation would soon return.

Governor Murat Uysal also downplayed concerns about the bank’s depleted FX reserves, which he said would naturally fluctuate during a pandemic. He did not address a drop of as much as 1.5 percent in the currency this week that could put more pressure on that buffer.

The bank now forecasts 8.9 percent year-end inflation, up from 7.4 percent in its previous quarterly report, assuming there is no second coronavirus disease (COVID-19) wave. It expects inflation to dip to 6.2 percent by the end of 2021, up from a previous forecast of 5.4 percent.

Economists expect higher inflation by year’s end, after it edged up to 12.6 percent in June.

Analysts are split over whether the central bank could pivot to monetary tightening to address stubbornly high prices and a real rate that has been driven into negative territory by an aggressive year-long easing cycle.

The bank halted rate cuts in June and held policy steady this month. Uysal said policy was in line with the inflation forecast.

As pandemic-related demand for goods gradually eases and things return to normal, he said, “inflation will enter a falling trend beginning in July.”

Turkey has recorded nearly 230,000 COVID-19 cases, with containment measures expected to shrink the economy this year.

The lira, which tumbled this week against the dollar after two months of trading flat, was off 0.2 percent after the quarterly report and brief news conference.

Uysal said the bank — which in past quarters had steadily downgraded inflation forecasts — reversed course and raised them due in part to imports and food prices. A fall in goods and commodities should boost the current account balance, he added.