Selahattin Demirtas and the politics of fiction

Selahattin Demirtas and the politics of fiction 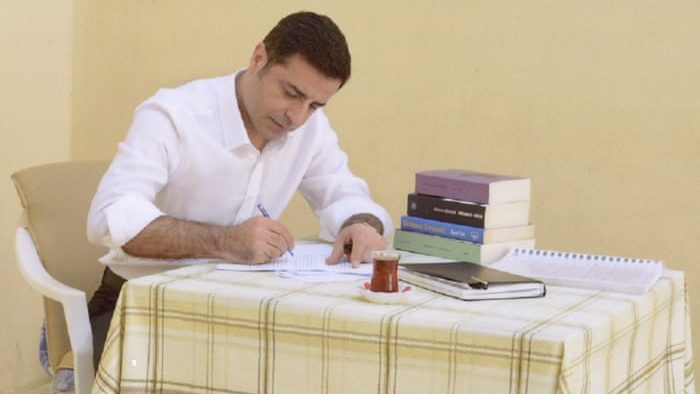 On February 14, police in Ankara raided the homes of university students and found one of them reading Leylan, the first novel by Selahattin Demirtas, former co-chair of the pro-Kurdish People’s Democratic Party (HDP), published a month prior on January 22. The newspaper BirGün reported that, while in custody, the police asked the student if they were a member of the People’s Defense Forces (HDG), an armed wing of the PKK, and where and from whom they had obtained the book, why it was at their house, and about its content.

Leylan is the third book of political fiction written by Demirtas since his imprisonment on November 4, 2016, on suspicion of having incited acts of terrorism during the events of October 6-8 of 2014, when demonstrations in Turkey allied with PKK forces fighting Daesh in Kobani, Syria. As the basis for their indictments, the national courts cited Twitter updates posted by the HDP account, and select speeches made by Demirtas.

As early as November 20, 2018, the European Court of Human Rights unanimously opposed the pre-trial detention of Demirtas, calling for his immediate release. However, the European Court stated that ‘there was sufficient information in the criminal case file to satisfy an objective observer that the applicant might have committed at least some of the offences for which he had been prosecuted.”

“His lawyers stand against this strongly, because in their view, which is right in my view, ill faith was there starting from the beginning of the process,” said Ayse Bingöl Demir, a human rights lawyer from Turkey based in New York, co-director and founder of the Turkey Human Rights Litigation Support Project, run by Middlesex University, London.

From January 7-8, days before the publication of Leylan, Demirtas gave four defense statements at the Sincan courthouse in Ankara. In May, his attorney, Mahsuni Karaman announced that Ankara’s Chief Public Prosecutor opened a terror investigation against Demirtas for his remarks in court. His defense statements are lengthy tracts directly criticizing Turkey’s ruling AKP governance as a corruption of statecraft, utilizing the anecdotal style that has defined his creative writing on themes of economic tragedy and political solidarity.

In Turkish, his three books have sold nearly 600,000 copies following his runaway debut success with Seher, his first collection of short stories. Its title story is about an honor killing, which continues to resonate with readers as Turkey grapples with issues of femicide. International publishers, spurred by advocates of free expression and human rights, have sold his books in 14 languages.

Writing for Ahval, a progressive news site blocked in Turkey, literary essayist Esra Yalazan reviewed Devran, the second collection of short stories by Demirtas. She found that his prose spanned a broad emotional range from “gut-wrenching” to “amusing”, but that “it is imbued with optimism despite everything.” To her, the defense statements that Demirtas made in January reflect a continuity with his literary voice, both on the page and in court.

During the second part of his defense at Ankara’s Sincan courthouse, which he gave on January 7, Demirtas repeats the word he used as title of his second book, “Devran”, which comes from the Arabic for “circulate”, but in Turkish means, “fate” or “fortune”. He used the Turkish expression, “devran dönüyor”, which arguably translates best to the American ear as “the times are-a-changing”. In his next sentence, he used another Turkish expression, literally snow falling on mountains, to indicate that Kurdish voters would turn their backs on the AKP.

In the title story of Devran, a character bearing that name has fallen to the fate endured by so many Kurds in Turkey, namely death by torture perpetrated by state actors. The narrator is Salim the Prosecutor, a Turkish man who benefited from his life as a governmental judiciary, sweeping cases like Devran’s under the rug. Snow falls heavily on the mountains of Erzurum, just as Demirtas said in his defense, when Salim meets the parents of Devran, and after experiencing their hospitality is struck by a guilty conscience so powerful it kills him.

The bitterness in the fiction of Demirtas is as sharp as his defense statements. By the end of Devran, the final story, “To Remain Human” (İnsan Kalabılmek), exposes the the 24-hour curfew in Cizre during which people were burned alive in their basement. In his cell, Demirtas penned: “Those who didn’t burn in the basement, those whose hearts didn’t ache for the ones that burned in the basement, can they be called human?” In his fourth and last defense statement, Demirtas referred to Cizre: “They burned. In 2015. I’m not talking about Hitler’s gas ovens in the 1940s. This happened in Cizre in 2015.” It was not the only time he brought up Hitler.

“A lot of Turkish politics is about the other, the enemy. Demirtas is very much about bringing people together. I was excited about HDP getting seats in parliament,” said Kate Ferguson, who co-translated his books into English with Amy Spangler.

While Seher sold out immediately in Turkey and went through five printings, the latest books by Demirtas have been less sensational. Ferguson and Spangler have only translated excerpts of Devran and Leylan into English. In Taiwan, for example, where Turkish organizations refused to discuss the book publicly, Seher sold only about 700 copies.

“You definitely hear the same voice in the defense statements of Demirtas as in his writing. It is more evident in Seher, not so much in Leylan, which is more fiction. He has a specific kind of sarcastic, witty humor, which comes out in almost everything he does, including his speeches.”
In the epilogue to Leylan, Demirtas wrote that he had no more books in him. He has been painting and playing music while his letters are censored and his case is pending, both in the national courts and as concerns the last judgment of the European Court of Human Rights.

“The Turkish state has been using the judiciary to target those figures that they think are a danger for their plans or policies. Demirtas is such a figure,” said Ayse Bingöl Demir. “Academics, journalists in Turkey get into trouble when they are critical of the government. Their free expression should be protected, but that is not the case in Turkey.”

The Turkish authorities are not obliged to wait for the final judgment from the Grand Chamber of the European Court of Human Rights. But as is common for political cases in Turkey, Demirtas can expect new accusations.

“His literary work, his books, his stories, give him a basis to still deliver his messages,” said Ayse Bingöl Demir. “When you read his books it’s very hard even for a problematic judiciary to find something to go after him. Terror-related offenses are used by the Turkish authorities to dehumanize him in the public’s eye. The stories of Demirtas change the government narrative, to show that these people are human beings, not terrorists.”