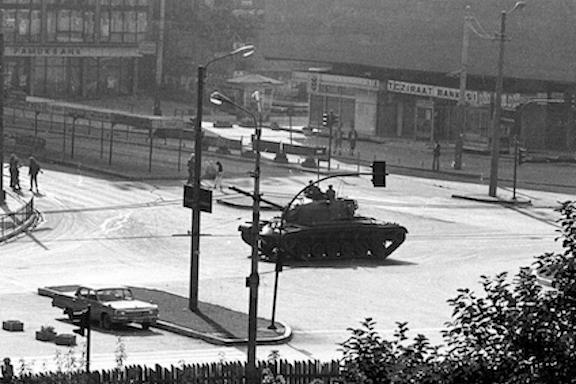 Forty years ago on September 12, 1980, Turkish generals toppled the elected government in Turkey which had been unable to stop the wave of killings between leftist and rightist factions. To establish law and order, the generals resorted to brute force by quickly implementing mass arrests in record numbers. As a result, more than 650,000 people were arrested from all walks of life, based on the flimsiest of excuses, subjected to unimaginable beatings and torture in several prisons, followed by rapid trials and hangings. 517 people were sentenced to death and 49 were hanged, ensuring “fairness” by hanging one from the left and one from the right. More than 500 people died in prisons during torture sessions. Kurdish language and music was banned. More than 3000 Kurdish villages in the east were forcibly vacated and burnt to the ground, resulting in almost a million Kurds to be displaced to the west. In short, terror caused by leftist-rightist struggles was replaced with state terror many times more violent.

I would like to give a few glimpses of how Armenians were affected by this turn of events.

Along with thousands of other leftist and rightist youth, Hrant Dink was also arrested and subjected to regular beatings and torture in prison. He explains that due to severe overcrowding in regular prisons, he was taken to a military school converted to prison. Turkish washrooms have only a hole on the floor and by covering the hole with plywood, the tiny washroom cubicles were made into prison cells.

As related by a facebook friend, Artun Sukyas was a young man interested in news photography. He would take newsworthy pictures and pass them on to a journalist working at a Turkish daily. When the car of a bank director was firebombed on a street in his neighborhood, he grabbed his camera and rushed to the scene. Police arrested him as a suspect of the car bombing and a possible member of ASALA (Armenian Secret Army for Liberation of Armenia). Despite frantic searches, his family couldn’t find out where he was taken and kept for three months. Eventually, he was tried and set free based on the evidence of his journalist friend. At the first opportunity, he left Turkey and came to Canada but due to the severe torture that he was subjected to, he soon passed away due to multiple internal organ failures.

Tanks on the streets of Ankara in September 1980

An Armenian friend who was in metal fabricating business in Istanbul, was arrested on suspicion of illegal exports. Although he was not charged by any prosecutor, he was kept in prison and tortured continuously. A routine torture method was inserting a police baton into the inmate’s rectum. His family tried to secure his release by bribing several police, prison and justice ministry officials, until they sold all their belongings. He was let go only when the officials got convinced that there was no more funding source left. There were hundreds of other Armenians arrested without charges, imprisoned and tortured for the sole purpose of extorting money from them.

During this time, ASALA did carry out an attack at Esenboga Airport in Ankara, Turkey on August 7, 1982 in order to publicize the continuing denial of the Armenian Genocide by Turkey. One of the militants, Zohrab Sarkissian was killed and the other, Levon Ekmekjian, was wounded and captured by Turkish security forces. Ekmekjian was tortured for several months in an Ankara prison and then put on trial. The trial was aired live on Turkish national television and Ekmekjian gave his testimony in Armenian which was then translated to Turkish. The trial was a formality, and Ekmekjian, age 25, was executed on January 28, 1983. This turned out to be the last execution in Turkey, as the death sentence was abolished soon after. As a postscript, Ekmekjian was buried in an unmarked grave near Ankara until 2016, when the heroic Turkish human rights lawyer Eren Keskin succeeded in having Levon’s remains transferred to France, to reunite with his family. But unfortunately, the Turkish officials played another twisted trick as DNA analysis revealed that most of the transferred bones turned out to be dog bones, not human bones. Going back to the trial, people all over Turkey were glued to the television watching it, including the Hamshen people. Hamshen (or Hemshin) is the name given to people living in the eastern Black Sea coastal region of Turkey. There is strong evidence that they are Armenians who migrated to this region after Seljuk Turks captured the city of Ani in the eleventh century, followed by more waves of Armenians settling in the region in later times. The region was conquered by the Ottoman Turks in the 16th century, and the Armenians were eventually forced to convert to Islam. Most of them did convert, but interestingly enough they kept the Armenian language, and continue to use it until today. And although they still speak a dialect of Armenian, with constant indoctrination from the government they have been made to believe that their ancestors migrated from Central Asia and their language is a branch of Central Asian Turkish. Watching the trial on TV, The Hamshen people were surprised to discover that Levon Ekmekjian spoke their own language. Many of them wondered if he was a Hamshentsi, and eventually realized that their language is Armenian, like his.

As stated above, the state terror after the September 12, 1980 coup was particularly vicious against the Kurds. Thousands of Kurds were arrested and tortured in the notorious Diyarbakir prison. One of the tortured Kurds was a young Kurdish teacher. The prison commander had ordered her to teach another imprisoned Kurdish girl to recite the Turkish national anthem. The Kurdish girl did not even speak any Turkish. The torture method was diabolical. There was a chamber in the prison basement where the pumped sewage would be collected. The teacher and the girl were made to stand in the chamber, with the stinking sewage level rising around them to their neck, until the girl learnt to recite the national anthem. This torture went on for days.

Several years after her release from the prison, the teacher was shocked to discover that her father was a hidden Armenian. On his deathbed, the father revealed this secret, asked his daughter to return to her Armenian roots and also to become a Christian. The teacher was on the first trip that I organized for large groups of hidden Armenians from Turkey to Armenia in 2014. She was faced with a huge dilemma, as she was married to a pious Moslem Kurd, who would never accept his wife to become Christian. As explained in my book ‘Trauma and Resilience- Armenians in Turkey, hidden not hidden and no longer hidden’, this lady faced an agonizing decision while our bus travelled from Sardarabad to Etchmiadzin. At the end, she decided to get baptized and become a Christian Armenian. When I asked: “Are you sure, what about your husband?” Her response was: “My father suffered all his life hiding his Armenian roots, if I will start having problems with my husband for the rest of my life, I am prepared for it and God will help us.” And the Kurdish teacher became Christian in Etchmiadzin, baptized with her Armenian grandmother’s name. Thankfully, there was no crisis at home upon her return from Armenia to Diyarbakir, except for the added trauma of being Armenian on top of being Kurdish.

Forty years have passed since the September 12, 1980 coup and the dictatorial regime that followed. After a few stable years of attempted democratization in the early 2010s, developments since 2015 indicate that Turkey is again veering toward a path of dictatorship, which means life for non-Turk, non-Moslem people such as Armenians, Greeks, Jews, Assyrians and Kurds will become even more unbearable.

Tags:
Previous Article
Army conscript claims he was beaten for speaking in Kurdish
Next Article
UN points finger at Turkey over rights abuses in Syria

Why President Biden Should Recognize the Armenian Genocide