Army conscript claims he was beaten for speaking in Kurdish

Army conscript claims he was beaten for speaking in Kurdish 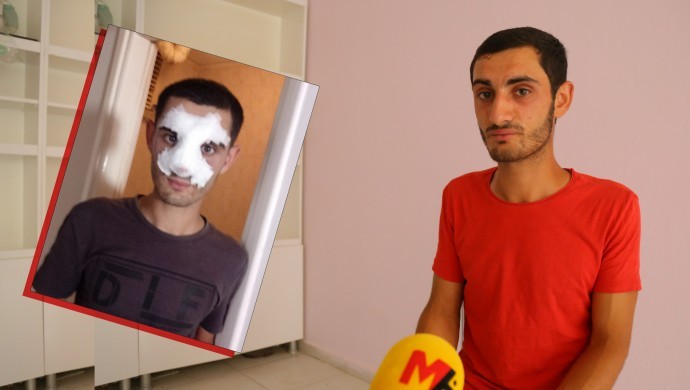 Çetin Doğan (20), a conscript in the Turkish army, has claimed that he was beaten for speaking in Kurdish during his military service and has filed an official complaint with the public prosecutor’s office, the Mesopotamia News Agency reported.

Doğan was serving in the 54th Mechanized Infantry Brigade in the border town of Edirne at the time of the incident. According to his account, two fellow conscripts, Y.K. and U.Y., were incensed when they heard him speaking in Kurdish with some Kurdish conscripts and later when he said, “I wish we were able to get Kurdish education.”

Doğan says the two later invited him to meet in a place not covered by a video surveillance system. While Y.K. was talking to him the other soldier, U.Y., hit him with a rifle, shouting, “You will pay for our martyrs,” in reference to Turkish soldiers killed by the outlawed Kurdistan Workers’ Party (PKK), recognized as a terrorist organization by Turkey, the United States and the European Union.

Doğan then fell on the ground and was kicked by the two soldiers. His nose was broken, his forehead was ruptured and his ribs were fractured in the assault. He was saved by a stranger. He says the attack was planned.

Doğan claims that upon what he thinks his attackers told their superiors, one of his commanders, A.A., accused him of being a terrorist after he returned to the base from the hospital. “You are a terrorist. … How could they even accept you in the army,” A.A. said according to Doğan. He was then sent home on sick leave.

Following the incident Doğan filed a complaint with the communications center of the office of the president. He received a response from the army command, which stated that as a result of an investigation the necessary legal steps were being taken against those who were involved in any wrongdoing or negligence regarding the incident.

Last month another Kurdish conscript, Osman Özçalımlı, a gendarmerie private who had recently been assigned to a prison in the western city of İzmir, died under suspicious circumstances a day after he called his father and said, “I’m in bad shape … they insult me, they call me a traitor.”

Züleyha Gülüm, a deputy from the pro-Kurdish Peoples’ Democratic Party (HDP), had claimed that the suspicious deaths that take place in the armed forces mostly involve Kurdish and Alevi soldiers and asked Minister of Defense Hulusi Akar in a parliamentary question if his ministry had any measures in place against ethnic and religious discrimination.