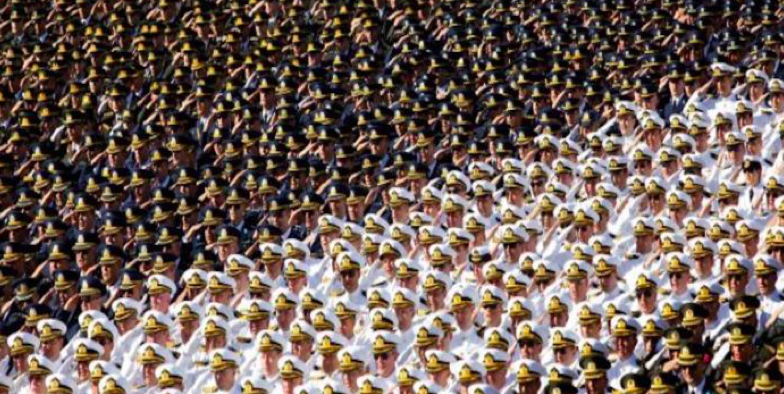 The İzmir Chief Public Prosecutor’s Office sent the files on 601 military personnel who can’t be prosecuted on terrorism charges due to a lack of evidence to the relevant military commands in order to start the administrative process for their dismissal, the state-run Anadolu news agency reported.

The files of an additional 110 military personnel for whom detention warrants were issued on October 13 were also submitted to the relevant commands for their dismissal. The officials are accused of ties to the faith-based Gülen movement, inspired by Muslim cleric Fethullah Gülen.

Turkish President Recep Tayyip Erdoğan has been targeting followers of the movement since the corruption investigations of December 17-25, 2013, which implicated then-Prime Minister Erdoğan, his family members and his inner circle.

Dismissing the investigations as a Gülenist coup and conspiracy against his government, Erdoğan designated the movement as a terrorist organization and began to target its members. Erdoğan intensified the crackdown on the movement following a coup attempt on July 15, 2016 that he accused Gülen of masterminding. Gülen strongly denies involvement in the abortive putsch or any terrorist activity. Following the allegations, Gülen called on the Turkish government to allow for an international investigation.

In the aftermath of the coup attempt, the government declared a state of emergency and dismissed tens of thousands of public servants from various institutions by means of emergency decree-laws.

In Turkey, under normal conditions, the Law on Public Servants requires that disciplinary actions, including dismissal from public service, be recommended by a committee after hearing the employee’s defense. The decision must then be approved by a higher body within the relevant institution and can be challenged in the administrative court system.

But during the state of emergency, public servants were not even informed of accusations against them and were never asked to submit their defenses. The legal path for appeal in the cases was also closed with a decree. After warnings by the European Court of Human Rights (ECtHR) about a case overload of complainants from Turkey, the Turkish government established the OHAL Commission as an appeal mechanism for civil servants dismissed by decrees.

Following the end of the state of emergency, a similar regime was created with a temporary law that would be in effect for 36 months, until July 2021. According to this law, officials suspected of membership in or affiliation with entities deemed a threat to national security can be dismissed by the ministers upon the proposal of a disciplinary commission.

According to a spokesperson for the Turkish Ministry of Defense, a total of 20,312 military personnel have been summarily dismissed from the Turkish Armed Forces (TSK) since the abortive putsch, and investigations are ongoing into a further 3,718 military personnel. More than 5,000 of these were dismissed based on the temporary law.

More than 150,000 civil servants were extra-judicially fired from their jobs as part of the post-coup crackdown.