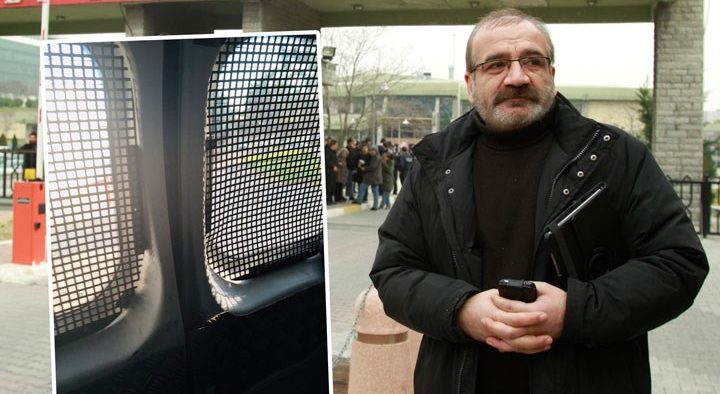 Famous Kurdish poet, writer and journalist Yılmaz Odabaşı was arrested in İstanbul shortly after he criticized an ongoing crackdown by the Turkish government on members of the faith-based Gülen movement, according to his tweets.

Odabaşı, 58, tweeted on Wednesday that he was detained while at a notary’s office and handed over to plainclothes police. In subsequent tweets, he said he was sent to court and then to Kandıra Prison, located in the northwestern Turkish province of Kocaeli.

It was not immediately clear on which charges Yılmaz was arrested; however, his arrest came hours after a tweet he posted earlier in the day about the government crackdown on members of the Gülen movement.

“The horrendous crackdown conducted on us, the leftists, for years during the Sept. 12 [1980] coup era is now being perpetrated on tens of thousands of people and KHK [purge] victims who are in some way associated with the Fethullah Gülen group. Everyone deserves respect as a human being, and oh, rulers, never take aim at women [mothers] and children,” Odabaşı tweeted, calling on everyone to raise their voice against the “blood freezing and sleep-hijacking tragedies.”

Turkey’s Justice and Development Party (AKP) government accuses the Gülen movement of masterminding a failed coup on July 15, 2016 and labels it a “terrorist organization,” although the movement strongly denies involvement in the coup attempt or any terrorist activity.

Since the coup attempt, followers of the Gülen movement have been subjected to a massive crackdown, with more than 130,000 removed from state jobs, close to 300,000 investigated and some 100,000 arrested on terrorism charges including ailing and elderly people, pregnant women and mothers of newborn babies.

In addition to the thousands who were jailed, scores of other Gülen movement followers had to flee Turkey to avoid the government crackdown.

Odabaşı left Turkey following the general election of November 2015 when the AKP, which has been in power since 2002, came to power again as a single party government. He returned to Turkey in 2016 after living abroad.

In 2017 Odabaşı received a suspended jail sentence of one year, eight months for allegedly insulting President Recep Tayyip Erdoğan in a column in 2015.

Insulting the president is subject to criminal charges under Turkish law, and President Erdoğan has sued critics, including regular citizens, in unprecedented numbers for allegedly insulting him.

In addition, Odabaşı announced from his Twitter account on Nov. 17 that he was given a jail sentence of two years, nine months and that his sentence had been upheld by an appeals court. He requested journalists not call him regarding the “unlawful” prison sentence, adding that he would discuss the issue with his lawyer and hold a news conference if necessary.

It was not immediately clear whether his arrest was based on this court decision.