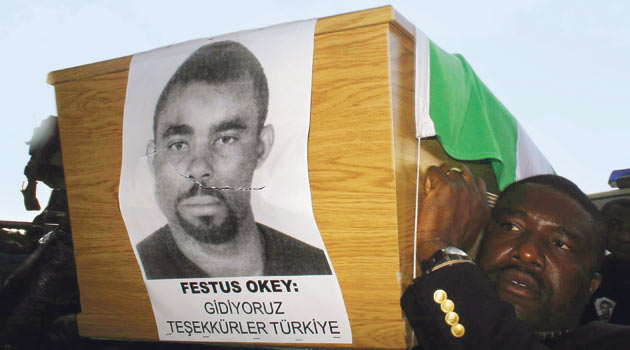 The Turkish Constitutional Court has decided that the right to life of Nigerian migrant Festus Okey, who was fatally shot by a police officer, was violated, Turkish media reported.

According to the court Okey’s family is to be paid compensation for the violation of his right to life. However, the court also decided that allegations of racial discrimination against Okey and claims that effective criminal investigations into public officials were not carried out were inadmissible.

Okey was shot by police officer Cengiz Yıldız while in detention at İstanbul’s Beyoğlu police station in August 2007. Yıldız had claimed that Okey was shot while trying to wrestle his gun from his hand.

The 21st İstanbul Criminal Court sentenced Yıldız to four years, two months in prison for manslaughter in 2011; however, the decision was reversed by the Supreme Court of Appeals. One of the judges of the criminal court had urged that Yıldız be sentenced to 20 years for murder in the first degree.

Yıldız was retried in 2018 and sentenced to six years in prison. In the meantime, Okey’s family and lawyers made a separate appeal to the Constitutional Court claiming Okey’s death was related to racial discrimination and that the investigation had not been carried out effectively.

According to a report prepared by Human Rights Watch (HRW) in 2008, shortly after the death of Okey, the case was littered with contradictions and irregularities. “… the conduct of the police demonstrates such serious failings in following basic investigative procedures and preservation of evidence as to compel a conclusion that there was a concerted attempt to cover up the incident ….”

The prosecutor had been called to the crime scene three hours after the fatal shooting took place, and the policeman who was appointed to investigate the case was the same policeman who had been involved in the shooting.

One crucial piece of evidence had been lost in the hospital, which was the shirt Okey was wearing at the time he was shot. The shirt was important for determining from what distance Okey was shot, and without it the trial had continued for years. The report also said security forces were seldom penalized for excessive violence against civilians.

In its annual report on Turkey for 2020 HRW reiterated its concern that Turkey had an entrenched culture of impunity when it came to abuses by members of the security forces and public officials implicated in allegations of torture, ill-treatment and cruel and inhuman or degrading treatment in police custody and in prison.