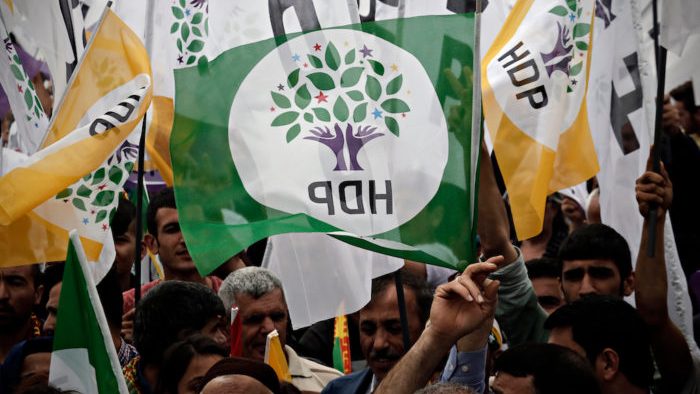 Prosecutors have submitted summaries of proceedings requesting the lifting of the parliamentary immunity of all 56 lawmakers of the Peoples’ Democratic Party (HDP), a left-wing party with majority Kurdish support, the Milliyet daily reported.

The Turkish government is accused of criminalizing the Kurdish political movement with a view to weakening the HDP, Turkey’s third largest political party according to the results of the 2018 general election.

The party’s charismatic former leader Selahattin Demirtaş has remained behind bars on politically motivated charges despite rulings by Turkey’s Constitutional Court and the European Court of Human Rights (ECtHR).

The European Court of Human Rights (ECtHR) on December 22 called for the immediate release of Demirtaş, finding Turkey guilty of violating his rights on five counts. The Grand Chamber said his pre-trial detention since November 2016 had sent “a dangerous message to the entire population” that sharply narrowed free democratic debate.

In a response Turkish President Recep Tayyip Erdoğan slammed the ECtHR for “defending a terrorist” who was responsible for dozens of deaths during violent protests six years ago.

Turkish authorities accuse HDP deputies of “instigating” street protests in Turkey’s Southeast in 2014 that claimed the lives of 37 people. The street protests were in support of Kurdish fighters in the Syrian town of Kobani while accusing the Turkish government of failing to provide adequate help to Kobani and of supporting the Islamic State in Iraq and the Levant (ISIL), which had laid siege to the town.

The protests later morphed into fierce clashes between pro and anti-Kurdistan Workers’ Party (PKK) groups in which 53 people were killed.

The PKK is an armed secessionist group listed as a terrorist organization by Turkey, the EU and the US.

Hugh Williamson, Europe and Central Asia director at Human Rights Watch, said that over the last four years the Turkish government had distorted and perverted the legal process to serve the political aim of keeping opposition politicians Selahattin Demirtaş, Figen Yüksekdağ and other former HDP deputies locked up.

According to the Ministry of Interior, a total of 151 elected mayors have been ousted from office on accusations of terrorism in the last six years, almost all from the HDP, replacing them with government-appointed bureaucrats. Speaking during a session of parliament’s Planning and Budget Committee, Interior Minister Süleyman Soylu said during the last two mayoral terms — 2014-2019 and 2019 onwards — 73 of the 151 mayors removed from office were sentenced to a total of 778 years in prison.