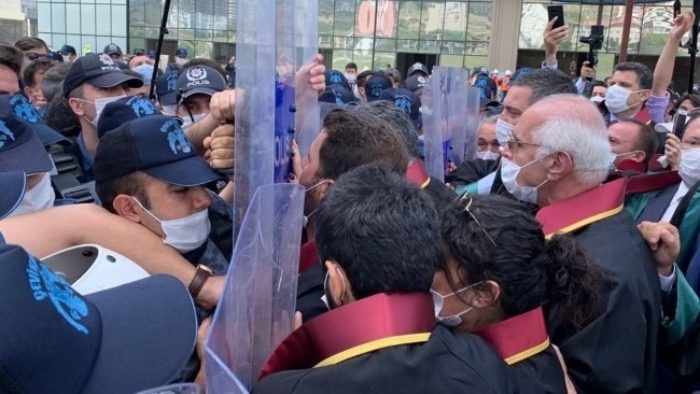 At the end of each year, the demise of the world’s most endangered species is charted in a sadly familiar list, from tigers and snow leopards to rhinos and gorillas.

But it’s not just wildlife that is at risk. Today marks the Day of the Endangered Lawyer, a moment to recognize the threats facing lawyers around the world who dare to stand up for human rights. In recent years Amnesty International has felt the impact of these threats close to home, through the government crackdown on our colleagues in Turkey.

One was a sunny morning in June 2017 I got a call. Taner Kılıç, our then chair of Amnesty International Turkey and a tireless asylum rights lawyer in Izmir, had been arrested in a dawn raid. Detention orders for 22 other lawyers had also been issued.Today marks the Day of the Endangered Lawyer, a moment to recognize the threats facing lawyers around the world who dare to stand up for human rights Stefan Simanowitz

A month later, Idil Eser, then director of Amnesty Turkey, was arrested along with nine others, including human rights lawyer Günal Kurşun.

Taner Kılıç, Idil Eser and the other nine arrested were all accused of absurd terrorism-related charges and held in pre-trial detention for many months – almost 15 in Taner’s case.

During a three-year trial involving 12 court hearings, each and every allegation presented by the government was comprehensively exposed as a baseless accusation.

And yet, last July, Taner was sentenced to six years and three months in prison for ‘membership of the Fethullah Gülen terrorist organization’. Turkey blames the Gülen movement for the 2016 attempted coup.

İdil Eser, Günal Kurşun and another human rights defender, Özlem Dalkıran, were also convicted and sentenced to one year and 13 months for ‘assisting the Fethullah Gülen terrorist organization’. A few months later in November, a regional appeals court upheld the unfathomable convictions, rubberstamping the miscarriage of justice. The four defenders have taken their case to the highest appeals court.

The fact that these politically motivated verdicts swept up several lawyers drove home the increased danger to the legal community in Turkey. Their cases are far from rare. Detaining lawyers has become routine practice, deepening the climate of fear and repression across the country.Lawyers are also coming under physical, sometimes fatal, attack Stefan SImanowitz, Amnesty International

Hundreds of lawyers are now believed to be in pre-trial detention or serving prison terms in Turkey’s overcrowded jails. They are regularly targeted through abusive criminal investigations and unfair prosecutions, accused of the alleged crimes of their clients.

Veteran human rights lawyer, Eren Keskin, has been on the receiving end of more than 100 criminal prosecutions for her role as a ‘symbolic editor’ of the now shuttered Özgür Gündem newspaper. If the sentences pending against her, Taner and Günal are upheld on appeal, all three, who are currently on bail, would be sent to prison and unable to practice law again.

In September, almost 50 lawyers were arrested in dawn raids across Turkey. They are facing charges because the clients they had been representing are accused of being part of the Gülen movement.

The latest blow came in November, when dozens of lawyers were among more than 100 people issued with detention warrants as part of what Turkish authorities called “terrorism-related investigations” in Diyarbakır.If lawyers lose their voice, citizens lose their breath Banner held by marching lawyers in Turkey

Commenting on the increasing number of arrests, the Istanbul Bar Association said: “A lawyer cannot be identified with their client. Intimidation which hopes to restrict the lawyers’ duty will impact the public as much as lawyers and gradually destroy confidence in justice.”

The targeting of defence lawyers with criminal charges for executing their duties contravenes the UN Basic Principles on the Role of Lawyers and critically undermines the right to a fair trial.

Lawyers are also coming under physical, sometimes fatal, attack. Tahir Elçi, a prominent human rights lawyer, died after being shot in the south-eastern province of Diyarbakır in 2015.

Two years ago, Turkey was the focus of the global ‘Day of the Endangered Lawyer’. Dozens of lawyers protested behind a banner that read ‘If lawyers lose their voice, citizens lose their breath.’The job of the human rights lawyer is increasingly vital in Turkey. More vital but ever more dangerous Stefan Simanowitz, Amnesty International

But little has improved in Turkey since then. Instead, the targeting and harassment of lawyers through the misuse of the justice system has become more acute.

Through abusive investigations, arbitrary detentions and unfounded prosecutions under vaguely defined anti-terrorism laws, Turkey is eroding the basic tenets of the rule of law.

In such a repressive climate the people who step up in defence of human rights violations themselves become targets. The job of defence and human rights lawyers is increasingly vital in Turkey, but ever more dangerous.