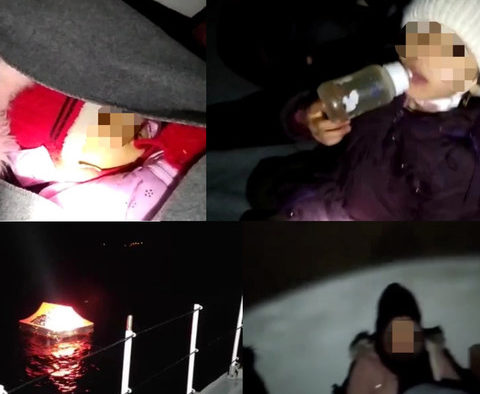 Three families from Afghanistan appear to have been abducted from a Greek asylum camp, robbed, beaten, and then illegally deported back to Turkey.

Among them was 28-year old Abudlrauf A., his heavily-pregnant wife, and two small children. Although his full last name was given, EUobserver has decided not to publish it.

“We went to ask for asylum and were brutally beaten. I am asking for justice. Give us justice,” he told EUobserver on Tuesday (23 February), speaking through an interpreter.

The case marks a potential first for Greece.

Reports of pushbacks, where people seeking international protection are illegally forced across the border, are common.

“It is the first time on the islands that they deport people illegally who had already been placed in a state structure,” he said.

Abudlrauf’s 25-year old wife is eight-months pregnant. Their first born is five-years old, while their second is almost two.

The families had documented their arrival and deportation using videos, photos, and location data sent via WhatsApp to Aegean Boat Report, an NGO.

Unredacted copies were then shared with EUobserver, depicting a timeline of events corroborating a story of abuse and fear by possibly four masked men against the families.

Along with two other families totalling 13 people, they landed on the northern part of the Greek island of Lesbos on 17 February at around 19:00.

Some six hours later, they found themselves forced onto a life raft and set adrift without any safety jackets. They were rescued around 4 am by the Turkish Coast Guard and taken to Behram, a port city.

“We left (the Turkish port) because we didn’t have money to pay for a hotel and food,” he said, accusing masked men in Greece of stealing his €150 in cash he had brought with him.

Abudlrauf and his family eventually made it to Konya, a city in Turkey, where they are staying with a relative.

“We lost everything,” he added.

The events surrounding the testimony is startling.

Once on the Greek island, Aegean Boat Report says they had guided the families to the nearby Megala Therma quarantine camp – run by the Greek ministry of migration.

They were then approached by a camp guard who told them they needed a Covid-19 test.

The NGO, citing sources at the camp, says such a request at night is highly unusual.

They also note the women and children in the group had been allowed to use the camp’s toilets.

But they were then moved west of the camp and locked inside a white container unit known as an isobox.

Aside from the flashlights on their phones, the families are in total darkness. A small child in the video can be seen suckling from a baby bottle, another is cuddled up asleep in grey blankets.

“Then four men came, their faces were covered, and they started to hit us,” said Abudlrauf. The men took everything. But someone in the group managed to hide a phone, said Abudlrauf.

Abudlrauf said they were forced to look at the ground and to remain quiet. They were then led to a van and driven to a port, possibly Petra.

“We wanted to ask for asylum but they didn’t even allow us to open our mouths. We couldn’t talk, we couldn’t say anything,” he said.

Upon arrival they were forced onto a speedboat, which then took them to an orange life raft out at sea, says Aegean Boat Report.

All were placed inside and set adrift. Video footage from inside the raft shows the same faces as those in the container unit.

People from Afghanistan have a good chance of getting asylum or a refugee status in Greece.

Recognition-rates last year in Greece were around 61 percent for the nationals, higher than the EU average of 55 percent.

But Turkey is also deporting them back to Afghanistan without due process, a point made by Abudlrauf’s lawyer Panayote Dimitras.

Dimitras says he will be requesting that they be allowed to return to Greece to file their asylum claims, noting the families had left because of the Taliban.

He also said that Greek law offers victims of illegal deportations based on racism a temporary residency permit.

“In a functioning democracy with the rule of law, it doesn’t matter where they come from. They are human beings that landed on an island,” he said.

Previous Article
Turkish-Iranian rivalry heats up over Mosul
Next Article
U.S. carries out airstrikes against Iranian-backed militia facilities in Syria