Ylva Johansson and Notis Mitarachi have fundamentally different ideas about how Europe should handle migration.

While the Greek migration minister has a reputation of being tough, Johansson, the EU commissioner for migration and home affairs, prefers to invoke European ideals. But human rights, transparency, adequate accommodation and freedom have been in short supply on Lesbos and other Greek islands for years — and still are today.

For months, Athens has faced accusations that asylum-seekers are being deported illegally. And human rights activists have also criticized the living conditions at Kara Tepe, a temporary refugee camp built after a devastating fire destroyed the Moria refugee camp in September.

‘There is no willingness to improve the situation’

During a joint visit to Lesbos on Monday, Johansson and Mitarachi were above all intent on showing unity. They addressed one another by their given names, and thanked each other for the good work that has been done.

The only disagreement came when talk turned to a recent UNHCR report, in which the United Nations refugee agency confronted the Greek government with cases of illegal deportation — a report which Mitarachi dismissed. Johansson, however, expressed concern and said she would like to see Greece make more of an effort to clarify the situation.

Other than that, however, Mitarachi nodded eagerly every time Johansson spoke of the need to ensure good living conditions, and of making sure that those who meet the asylum requirements were welcomed in Europe.

Greece should have the funds to do so: Brussels has provided more than €3 billion ($3.5 billion) to maintain the migration hot spots on the Greek islands, and several millions more to establish the Kara Tepe camp. 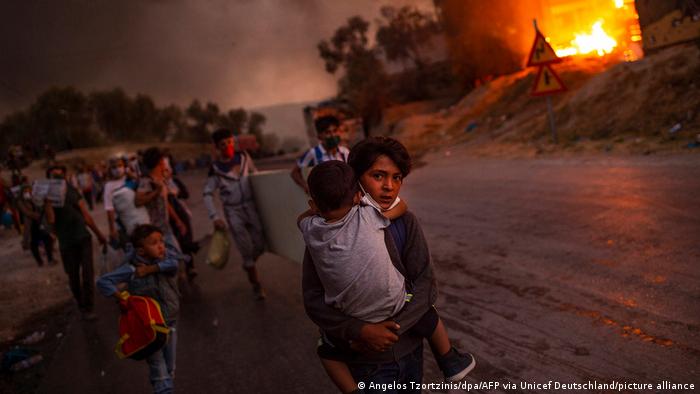 But Fabian Bracher, an activist with the UK-based Choose Love NGO, wonders where the money has gone. Running water is non-existent at Kara Tepe; instead, water is brought in every day on 17 large trucks. The camp offers 36 showers for 7,000 people, forcing many to resort to “bucket showers.” The power supply is insufficient, with frequent circuit overloads causing fires. And the shelters lacked heating throughout the winter months.

“There is no willingness to improve the situation so people have dignified accommodation,” said Bracher. He said that the issue of the electricity supply was brought up in late September, but nothing happened to improve the situation. “Various organizations offered to take care of the problem, but they were not given permission,” he said.

The EU is generally reluctant to criticize Greece — perhaps because of a lack of alternatives. At a press conference on Lesbos, Johansson instead criticized the bloc’s disunity on refugee policies.

“For three years there had been no progress on finding a political solution,” she said, adding that the Greek islands in particular have suffered from the reluctance of other EU member states to take in refugees.

Johansson said the EU would be providing €276 million in funds for the construction of new migrant facilities on Samos and other islands, camps which Mitarachi described as “closed facilities with NATO-style double fencing, strictly controlled entrance and fire protection systems.”

Until now, Johansson had categorically ruled out a closed system. But while they may continue to disagree behind closed doors, on Monday they appeared to agree on a compromise — “controlled entry and exit,” which means asylum-seekers will only be allowed to leave the camps at certain times. And yet, it’s not exactly clear where they would go. To avoid any further conflict with the local population, the new camps are being built farther away, putting nearby villages out of reach of those on foot.

Both politicians, however, stressed that the new camps weren’t a permanent solution. They are still pushing for “fast and fair asylum procedures” — in the future, migrants at the camps should be able to directly apply for asylum in other European countries, while rejected asylum-seekers would have to be quickly deported. It’s hoped that Turkey will once again agree to take back the rejected asylum-seekers, as stipulated in a deal that Turkish President Recep Tayyip Erdogan unilaterally revoked in February 2019.

‘Deporting people is a priority’ — legal assistance is not: NGO

In fact, asylum procedures in Greece have been significantly accelerated. At first glance, the country’s national asylum laws appear to meet European standards that include the right to appeal after the first rejection, access to qualified legal counsel and a translator, as well as privacy and trained staff for the interview.

But there are serious shortcomings concerning the implementation of these laws, said Amanda Munoz de Toro, executive director of Fenix, which provides free legal advice to asylum-seekers on Lesbos.

“Deporting people is a priority, but guaranteeing them adequate legal assistance is not,” she said, adding that this approach is also reflected in the interviews. “Often the translation is not good, or people conduct online interviews without a camera, which means that the person in charge cannot see his counterpart — which is important to be able to assess credibility.”

Often, she said, the privacy of those in need of protection is not respected, which is important for traumatized refugees. “Case workers are often not trained to deal with these people and don’t know what questions to ask,” she said.

This article has been translated from German.