Don’t send migrants back to Libya and ‘inhumane’ camps, Pope pleads with officials

Don’t send migrants back to Libya and ‘inhumane’ camps, Pope pleads with officials 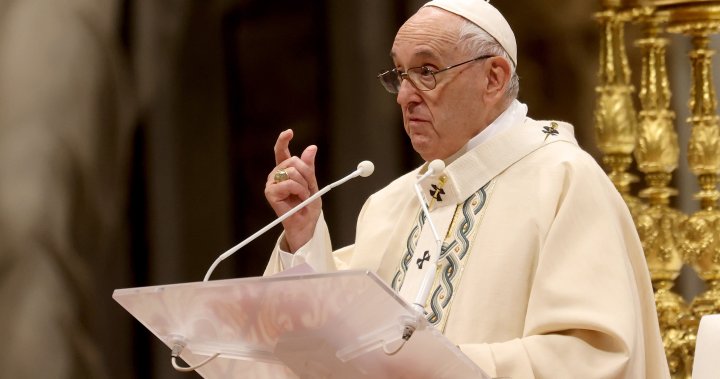 (AP) Pope Francis on Sunday made an impassioned plea to end the practice of returning migrants rescued at sea to Libya and other unsafe countries where they suffer “inhumane violence.”

Francis also waded into a highly contentious political debate in Europe, calling on the international community to find concrete ways to manage the “migratory flows” in the Mediterranean.

“I express my closeness to the thousands of migrants, refugees and others in need of protection in Libya,” Francis said. ”I never forget you, I hear your cries and I pray for you.“

Even as the pontiff appealed for changes of migrant policy and of heart in his remarks to the public in St. Peter’s Square, hundreds of migrants were either at sea in the central Mediterranean awaiting a port after rescue or recently coming ashore in Sicily or the Italian mainland after setting sail from Libya or Turkey, according to authorities. Dozens of others sent out a plea for help from a flimsy rubber dinghy.

“So many of these men, women and children are subject to inhumane violence,” he added. ”Yet again I ask the international community to keep the promises to search for common, concrete and lasting solutions to manage the migratory flows in Libya and in all the Mediterranean.“

“How they suffer, those who are sent back” after rescue at sea, the pope said. Detention facilities in Libya, he said “are true concentration camps.”

“We need to stop sending back (migrants) to unsafe countries and to give priority to the saving of human lives at sea with protocols of rescue and predictable disembarking, to guarantee them dignified conditions of life, alternatives to detention, regular paths of migration and access to asylum procedures,” Francis said.

On Sunday, the humanitarian group Alarm Phone reported that 60 persons had contacted it to say they were in need of rescue from their flimsy rubber boat.

Separately, Doctors Without Borders, said 296 migrants aboard its rescue ship Geo Barents were awaiting permission in waters off Malta to disembark. Six migrants tested positive for COVID-19, but because of the crowded conditions aboard, it was difficult to keep them sufficiently distant from the others, it said.

In Sicily, a ship operated by the German charity Sea-Watch, with 406 rescued migrants aboard, was granted permission to enter port.

While hundreds of thousands of migrants have departed in traffickers’ boats for European shores in recent years and set foot on Sicily or nearby Italian islands, many reach the Italian mainland.

Red Cross officials in Roccella Ionica, a town on the coast of the “toe” of the Italian peninsula said on Sunday that about 700 migrants, some of them from Afghanistan, reached the Calabrian coast in recent days on boats that had departed from Turkey.

Italy and Malta have come under criticism by human rights advocates for leaving migrants aboard crowded rescue boats before assigning them a safe port.

The Libyan coast guard, which has been trained and equipped by Italy, has also been criticized for rescuing migrants in Libyan waters and then returning them to land where the detention centres awaited them.

Doctors Without Borders tweeted on Friday that crew aboard the Geo Barents had “witnessed an interception” by the Libyan coast guard.

“We don’t know the exact number of people intercepted. But we know that they will be forcibly taken to dangerous detention facilities and exposed to violence and exploitation,” the humanitarian organization said.

With rising popularity of right-wing, anti-migrant parties in Italy in recent years, the Italian government has been under increasing domestic political pressure to crack down on illegal immigration. Italy, along with Malta, has also lobbied its European Union partner countries, mainly in vain, to take in some of those rescued at sea, since many of the migrants are hoping to find relatives or work elsewhere in Europe.

“Let’s all feel responsible for these brothers and sisters of ours, who for too many years are victims of this very grave situation,” the pope said, concluding his remarks with a request for faithful in the square to join him in silent prayer.