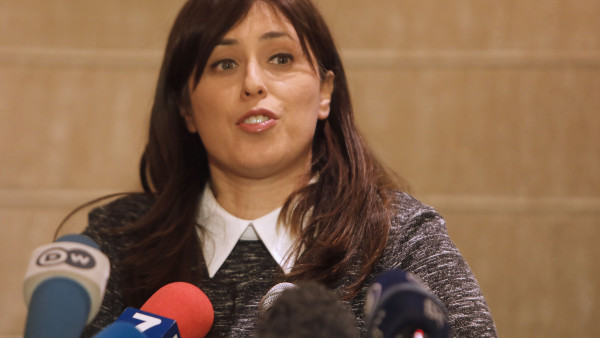 Students who organised the protest say it was peaceful and that there is ‘no place for a Nakba denier and anti-Palestinian racist’ on campus.

Students at the London School of Economics (LSE) have defended their protest against a university event that welcomed Israeli ambassador Tzipi Hotovely on Tuesday, as government ministers closed ranks in opposition to the demonstration.

Hotovely, who previously called the 1948 Nakba – the expulsion of hundreds of thousands of Palestinians from their native land to create the state of Israel –  an “Arab lie”, was seen swiftly leaving the university with flowers in hand as bodyguards surrounded her and police warded off protesters.

“Students maintained a peaceful protest throughout the evening and it was the police who incited violence… the protest was a tremendous demonstration of solidarity with Palestine… there is no place for a Nakba denier and anti-Palestinian racist like Hotovely on campus,” LSE for Palestine, the student group who organised the protest, said in a statement on Wednesday.

Disgusted by the treatment of the Israeli Ambassador at LSE last night.

Antisemitism has no place in our universities or our country.

I will continue to do everything possible to keep the Jewish community safe from intimidation, harrassment & abuse.

Government ministers, however, have criticised the student action and attempted to link it to anti-semitism.

“Antisemitism has no place in our universities… the police have my full backing in investigating this appalling incident,” UK Home Secretary Priti Patel said in a tweet, linking the anti-zionist demonstration to anti-semitism.

Patel on Wednesday also voiced support for a police investigation into the demonstration.

Students who attended the protests have responded to the allegations on Twitter, including by highlighting that many of those opposed to Hotovely’s speech at the LSE were Jewish.

Minister of State for Higher Education Michelle Donelan also condemned the “intimidation”, stating she has made clear to the director of the university that she expects a “rapid investigation” with disciplinary consequences for any students involved in “unlawful intimidation”.

Despite the protest, the LSE, Israeli Embassy and Hotovely, agreed the event was “successful” and went according to plan.

The LSE says it will review processes around such events, stating “intimidation or threats of violence are completely unacceptable” and that they will “take action if any students are identified as having made threats of violence”.

Israel accused of carrying out air strikes on Syria