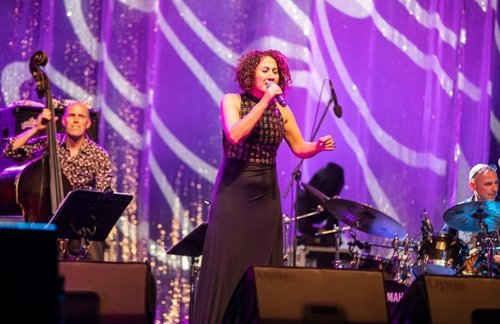 Musician Aynur Doğan took the stage in Ankara yesterday (May 22) after performing in İzmir the previous week.

The Derince District Municipality in the northwestern province of Kocaeli banned the Kurdish and Alevi singer’s concert, which was due to be held on May 20.

Doğan continues her Turkey tour despite the ban and the hate messages targetting her on Twitter.

“We can stand together, we sing together,” said Doğan on the stage while introducing her orchestra during the concert she held at Middle East Technical University (METU) Vişnelik, in Turkey’s capital, Ankara.

Later, Doğan performed her song ‘Dar Hejiroke (Fig Tree)’ which was shared a lot on social media as a sign of solidarity with Doğan.

The singer will perform in the following cities in the upcoming days:

Doğan will continue her tour in Europe after Turkey. She will be in Germany, Austria and Holland.

Kocaeli’s Derince District Municipality banned Doğan’s concert on the weekend after she was targeted by pro-government groups on social media.

The municipality run by the ruling Justice and Development Party (AKP) only said that the concert would not be “appropriate,” but didn’t specify the reason.

Doğan wrote that she will not give up on her way despite the bans.

“Poets are those who prove the truth, and we continue on this path. We will grow together by sharing wherever we can and wherever your love is.”

We are not punching bags to build your “muscles”, but opportunities to strengthen your heart and conscience,” said Doğan last week in her Tweet.