The crossing at Bab al-Hawa in north-western Syria is no ordinary border. It is a lifeline.

Every month, 600 to 800 trucks sent by international organizations drive from Turkey into the Idlib region in Syria. They supply millions of people there with food, medicine and much more.

“If Bab al-Hawa is closed, it could lead to a humanitarian catastrophe,” Huda Khayti, head of the Idlib women’s centre, told DW. “The people in the refugee camps in this region are particularly dependent on aid.”

Together with the organization Medico International, Khayti supports the internally displaced people in the area with educational services. 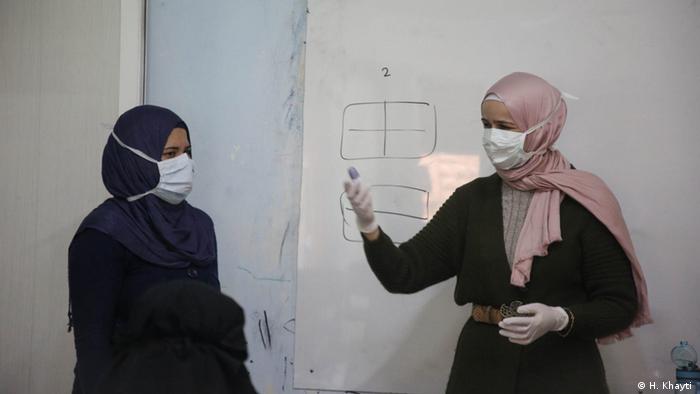 Even a brief glance at the numbers shows just how important Bab al-Hawa is for the Syrians in the north-west of their country. It is estimated that about 4 million people live in Idlib, almost 2 million of them in camps. Many have already fled their homes several times and almost all are dependent on humanitarian aid. In the Atmeh camp alone, 10 kilometers north of the border crossing, there are around a million people living in makeshift huts and tents. There is no running water or enough power, and thanks to the difficulty of maintaining good hygiene, diseases run rampant.

For all of these reasons, the Bab al-Hawa border crossing is often described as a lifeline. However, it’s a lifeline that may be cut on July 10.

Will the crossing stay open?

On that date, the UN Security Council in New York is slated to renegotiate the extension of the mandate that allows for aid deliveries into Idlib via Bab al-Hawa.

In 2014, the UN Security Council agreed that four border crossings be held open here, allowing access into northwestern Syria. The aim was to provide basic necessities to the people living in the last remaining rebel stronghold in Syria. The area is controlled by a staunch Islamist group, Hayat Tahrir al-Sham. 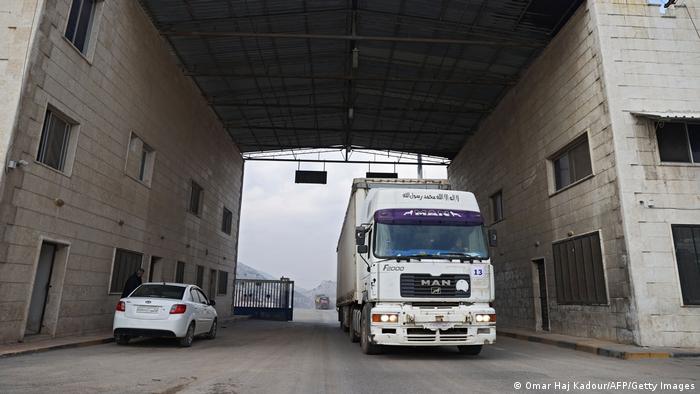 However this mandate is not permanent. It needs to be renewed annually by the UN Security Council.

The authoritarian leader of Syria, Bashar Assad, has protested the renewals as he would prefer to extend his influence into these last remaining rebel-held parts of the country. Russia is one of Assad’s greatest allies and was instrumental in helping the Syrian leader fight revolutionary forces. Russia is also a permanent member of the UN Security Council and has the power to veto any decisions on the border crossing mandate.

It has used that all-important veto to its own advantage several times already. For example, in 2020, a compromise decision to keep Bab al-Hawa open was only reached with great difficulty.

Khayti says that every year, she gets anxious about this pivotal date in July. “Seriously ill people are also sent to Turkish hospitals over Bab al-Hawa,” she explained. “Where will they be treated in the future? There are no chemotherapy drugs here.”

Bente Scheller, head of the Middle East and North Africa section at Germany’s Heinrich Böll Foundation, firmly believes it is a problem that these decisions about cross-border aid are being made by the UN Security Council. “Russia can use its veto as another weapon against the Syrian population,” she told DW.

Russia, which often sides with and protects Syria at the UN, has been pushing for all humanitarian aid to be channeled through the Syrian capital, Damascus. But critics argue that then the Syrian regime will likely only provide aid to people loyal to Assad. Closing the Bab al-Hawa crossing gives the Assad regime another lever with which to exert pressure on the population of Idlib. 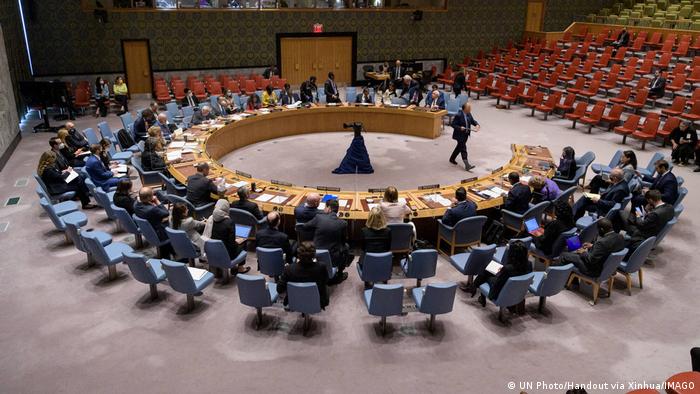 The UN Security Council has 15 members, five of which — including Russia and the US — are permanent

It would also only strengthen the Assad regime’s claim that it is the only legitimate power in Syria, with whom all outsiders should deal with.

And now, it’s now quite possible that Russia will have another use for its UN Security Council veto on the Bab al-Hawa crossing. It may become a bargaining chip in its war on Ukraine.

Experts suspect that Russia may use the July 10 vote to extract concessions on its own behalf after the US and EU imposed sanctions on it, following Russia’s invasion of Ukraine in late February.

Scheller expects that Russia might in fact forbid further aid through the Bab al-Hawa crossing, a form of revenge for sanctions on it. On the other hand, Scheller said, “perhaps it will decide to keep hold of this leverage.” 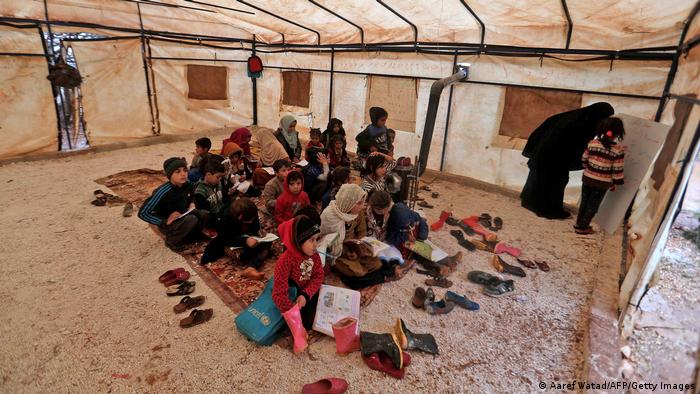 Right now, it’s impossible to know what Russia will do. In a May interview with the New York Times, Russia’s deputy UN ambassador, Dmitry Polyanskiy, said his country had not yet decided how to vote.

“I do not deny that it [the aid] goes to refugees as well, but the terrorist groups — they benefit from this,” he told reporters.

The Hayat Tahrir al-Sham, or HTS,  militia that dominates the area also controls the border crossing and they collect customs duties on goods coming in.

“By claiming at every opportunity that there are only terrorists in Idlib, Russia wants to scare off donors,” Scheller explained. “HTS controls Idlib and is extremist,” she agreed. But millions of other people also live in the province and more than 95 per cent of them are civilians, including many women and children.

In general, the humanitarian situation in Syria remains disastrous after 11 years of war and has only been worsened by a severe economic crisis, including falls in value of the Syrian and Turkish currencies. 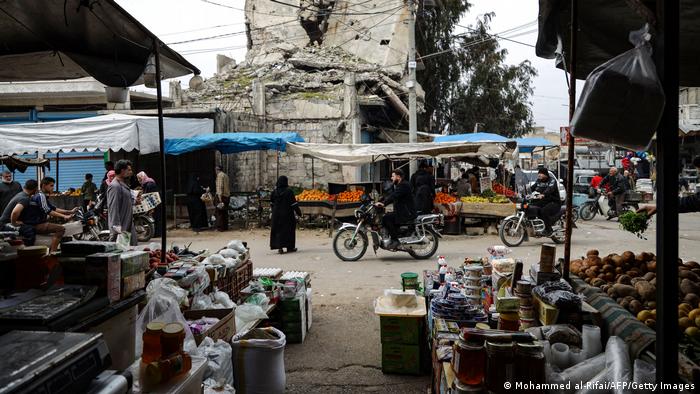 Food prices have rocketed up in Idlib amid an economic crisis

Idlib was once considered Syria’s granary. But not much is left of that, as many farmers have been driven out or fled, fields have been hit by missiles strikes or people are camping in their fields.

Even before the Ukraine war, Syria was grappling with a wheat shortage. “The global supply crisis is currently making the situation worse,” Medico International’s Starosta told DW. Bread, flour, sugar and fuel are all in short supply.

On the other hand, the security situation has actually improved a little. There is officially a ceasefire, with HTS and its ally, Turkey, on one side and Syria’s Assad and his Russian allies on the other. The ceasefire has meant less fighting in Idlib over the past two years, even though there are still airstrikes.

The EU and US claim that Syria remains high on their political agenda but mostly they provide humanitarian aid. In May, a little over €6 million ($6.3 million) was collected for Syria at a donor conference in Brussels. However within Syria itself, only three countries are really calling the shots: Russia and Iran on Assad’s side, and Turkey in Idlib and north-eastern Syria.

It’s not only Assad and Russia that might benefit from an end to the UN mandate on the Bab al-Hawa border crossing. Turkey could also profit.

This is because it is not only UN-supplied aid that goes into Idlib at Bab al-Hawa. Turkish aid organizations also operate here and, should the UN mandate end, Turkey could still decide how much aid other organizations get to send into this part of Syria.

Should Turkey allow aid deliveries, one of the major motivations for it would be to prevent displaced Syrians from fleeing into its territory, something the Turkish do not consider in their interest. Syria was facing a 2 million ton wheat shortage this year, even before the Ukraine war began

At the same the residents of Idlib also remain worried about what Turkey has been doing in the north-east of Syria. For weeks, the Turkish have been shelling villages there and sending drones out to surveil inhabitants. Turkish President Recep Tayyip Erdogan has said it is because he wants to drive Kurdish forces close to the outlawed Kurdish Workers’ Party, or PKK, out of the border region. The PKK has been involved in a 38-year insurgency against the Turkish government and is designated a terrorist organization by the US and the EU.

However Erdogan’s critics believe the Turkish leader’s real goal is to secure more Syrian territory, in order to send refugees there, even if they come from other, non-Kurdish parts of Syria. Should Turkey achieve those aims, then Khayti, who is based in Idlib, said, people worry they might be displaced again.

Nobody knows whether Russia and Turkey have been discussing the Bab al-Hawa crossing behind closed doors. “But what I do know is that we in Idlib are always a football for those with political interests here, and especially when Russia wants to achieve some political goal,” Khayti argued.

Whatever happens next, Medico International’s Starosta has just one last plea to make: She simply asks that all aid organizations join forces to fight against the instrumentalization of humanitarian aid.

This story was originally published in German.

Why the US will hold off on Syria regime normalisation, for now
NAT 25th October 2021

What moves Putin, Assad, Erdogan and the Kurds?