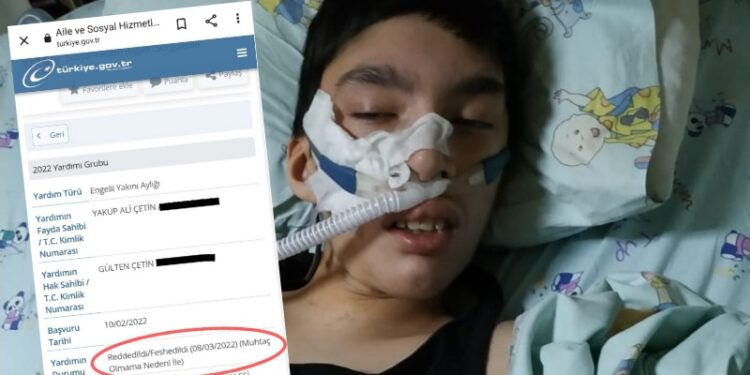 Yakup Ali Çetin suffers from epileptic seizures and hypotonia, a degenerative muscle disease, in addition to autism. He needs special care at home and frequent treatment at a hospital. His mother, his primary caregiver, does not have any income and is eligible to receive disability benefits to take care of her son. The family’s financial situation declined considerably after Çetin’s father, Eyüp Çetin, was arrested.

Although the mother, Gülten Çetin, applied for disability benefits from the Social Welfare Directorate in Konya in February, her request was rejected. The directorate conducted an investigation into the family and concluded they “did not need help.”

“I expected this decision because of my husband’s situation. I know it is very difficult for families of political prisoners to get these benefits because we are discriminated against by the state. But I applied for it because I was so desperate,” Gülten Çetin said.

She added that her husband was the primary provider of the family and that it had become too difficult to take care her son alone. Now, without financial support, she worries that she will not be able to meet her son’s needs.

Eyüp Çetin, a former teacher, was arrested on December 18, 2021. He was accused of working for a private school affiliated with the Gülen movement, convicted and sentenced to eight years, nine months in prison.

Eyüp Çetin asked to be released pending appeal or placed under house arrest to take care of his son, but his request was denied.

Dismissing the investigations as a Gülenist coup and conspiracy, the AKP government designated the movement as a terrorist organization and began to target its members. Government intensified the crackdown following a coup attempt on July 15, 2016 that they accused Gülen of masterminding. Gülen and the movement strongly deny involvement in the abortive putsch or any terrorist activity.

“Another example of cruelty! Yakup Ali Çetin, who is almost totally disabled, was denied disability benefits! His father was a teacher at a school that was closed down by a decree law. Since he has been imprisoned, the family has faced many difficulties. Yakup Ali’s health is getting worse and worse and his siblings and mother are suffering from mental distress. The authorities said they did not need the benefits,” Gergerlioğlu said.

Turkish authorities have discriminated against disabled children due to their parents’ alleged affiliation with the movement in the past. Nurefşan Ketenci, 16, a young girl with major disabilities had been forced to leave a public special needs school in Turkey because her father used to work for an institution that was shut down by a government decree for its affiliation with the Gülen movement.

Authorities also cut financial assistance to the family of  Nurbanu Aydın, a 29-year-old “spastic quadriplegia cerebral palsy” patient, after her father, Muammer Aydın, was arrested for links to the movement.