Eastern Mediterranean governments at war with the NGOs

Eastern Mediterranean governments at war with the NGOs 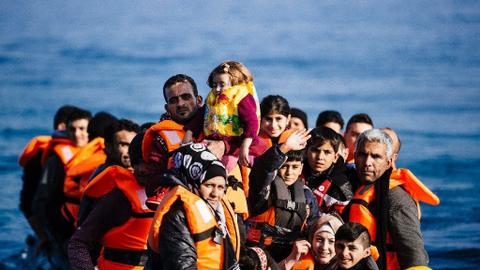 The refuge issue remains at the forefront in the Eastern Mediterranean

The issue of migration continues to dominate the headlines in many Eastern Mediterranean countries where anti-immigration articles and opinions are often publicly circulated. In addition to the said hostile climate that is being cultivated, right-leaning countries of the area have now begun cooperating as migrants and refugees continue to arrive along the southern coast of the European Union. Specifically, four EU member countries, that is Italy, Malta, Greece, and Cyprus, are forging a new front to push for stricter immigration policies from the bloc.

A few weeks ago, the four nations released a joint statement in response to non-governmental groups racing to aid migrants and refugees who were battling the Mediterranean Sea’s waves to reach European shores.

The Eastern Mediterranean region banding together behind anti-immigration slogans and actions is not well received by the European left or human rights advocates. From their perspective, the region’s major humanitarian problem is not going to be resolved by the collaborative efforts of the four regional nations, which are hostile to non-governmental organizations providing humanitarian aid to migrants.

The four countries underlined that “On 10th June 2022, we approved a Political Declaration establishing a temporary and voluntary relocation mechanism” before they moved on to express their common concern at the fact that “Unfortunately, the number of pledges for relocation made by participating Member States only represents a very small fraction of the actual number of irregular arrivals that we have received so far this year. Moreover, to date, the mechanism has been slow in delivering on its stated goal of alleviating the burden”.

In the joint statement, which provoked reactions in the EU, the following stand out: “We cannot subscribe to the notion that countries of first entry are the only possible European landing spots for illegal immigrants, especially when this happens in an uncoordinated fashion based on the choice made by private vessels, acting in total autonomy from the competent state authorities. We reiterate our position that the modus operandi of these private vessels is not in line with the spirit of the international legal framework concerning Search and Rescue Operations, which should be respected. Every State shall effectively exercise its jurisdiction and control over ships flying its flag”.

The joint communication concludes with the message, “We ask the European Commission and the Presidency to take the necessary steps to initiate this discussion”.

The timing is not accidental

For Alberto Pieri, the timing of the joint announcement by the governments of Malta, Italy, Greece, and Cyprus is not accidental. It is connected to the election of Italy’s new right-wing government. The goal of Giorgia Meloni’s administration is to implement a new immigration policy at the European level that is specifically tailored to the ideals and requirements of the nationalist and xenophobic political coalition it heads.

“Two vessels, which offer humanitarian aid to immigrants, act in a manner that is “not in line with the spirit of European and Italian rules on security and border control and countering illegal immigration,” according to a directive that Italy’s new interior minister has signed recently. As a result, the country is considering forbidding them from entering territorial waters” underlines Pieri who adds that “Meloni doesn’t speak of naval blockades but of recovering the original proposal of the European Union’s Sophia naval mission, which envisaged the blocking of departures from North Africa creating on African territories hotspots that are managed by international organizations and where we can screen asylum requests”.

According to the Italian reporter, the so-called “third phase” of the Sophia naval mission, which was never launched, involves the detention, inspection, and seizure of ships with the accusation of human smuggling and trafficking, including in Libyan territory’s internal waters. In this direction, Italy has already effectively delegated the Libyan Coast Guard, giving it material help and funds, to intercept ships and forcibly return them to Libya within the context of the Italy-Libya referendum.

Dimitris Angelides believes that last Saturday’s joint statement of Greece, Italy, Cyprus, and Malta adopts a certain rhetoric that questions the core of human rights and the protection of human life. “The Greek government fully agrees with the harsh anti-refugee policy of the far-right Italian Meloni government, which refuses to dock rescue boats carrying shipwrecked refugees, and calls on the EU to adopt the toughest policy of criminalizing rescue organizations and solidarity,” claims the Greek journalist.

Angelides reminds us that Spain, a member of the MED5 initiative in the refugee crisis, abstained from the joint declaration of the other four Mediterranean nations. The decision made by Spain shows how far its socialist administration is from the staunchly anti-refugee position.

Angelides emphasizes that “behind the generalized and twisted rhetoric of the joint declaration lies the war that Europe’s extreme right-wing governments have declared on rescue organizations,” adding that “the four countries are doing everything in their power to vehemently and with flimsy arguments deny refugees on their territory, even if they are shipwrecked, and their lives are in danger. This stance, of course, violates international refugee law.”

“The dead and missing cannot become the new normality”

The European Left does not share the hostility of the governments of the Eastern Mediterranean toward the groups that support the interests of those attempting to reach the European coast. According to the Left, the immigration issue extends beyond the limited scope of the conflict between some non-governmental organizations and certain European governments. The Communist Party of Greece (KKE) espouses this viewpoint.

According to the KKE, the Greek Prime Minister Kyriakos Mitsotakis, whose administration signed the new joint statement, tries to defy the criticism by “repeating the well-known nonsense about respect for human rights and implementing the terrible EU-Turkey agreement.” This occurs as the number of shipwrecks and missing persons in the Aegean and Mediterranean increases.

According to KKE, “Our people must show no tolerance. They must not allow the dead and missing at sea to become the new normality”. KKE adds, “What is needed is the country’s immediate disengagement from the imperialist plans and interventions that are uprooting millions, the demand of the abolition of the EU-Turkey Joint Statement and the protection of the right of refugees to asylum in the countries of their real destination.”

By: Dr Nikolaos Stelgias – was born in Istanbul. He is an independent researcher, writer, historian and journalist. His doctorate is in the field of the modern Turkish political system (Panteion University, 2011). His latest book “The Ailing Turkish Democracy” was published by the Cambridge Scholars Publication in 2020. Dr. Stelgias was a correspondent of the newspaper “Kathimerini (Cyprus edition)” for Turkey and the Turkish Cypriot community from 2009 to 2021. Currently, Dr. Stelgias works at the Cyprus News Agency. Dr. Stelgias publishes in Turkish news articles and analyses on Cyprus and Greece.