Harassed student says she has safety concerns after minister targeted her

Harassed student says she has safety concerns after minister targeted her 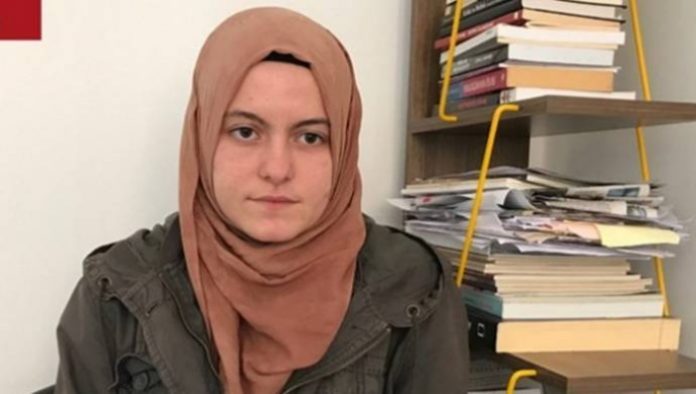 Merve Demirel, whose apparent sexual harassment by a police officer last weekend in Ankara was captured on camera, said on Friday she is concerned about her and her family’s safety after the minister of interior affairs targeted her directly this week.

“At the moment I’m worried about our safety,” she told the Mezopotamya news agency after Minister Süleyman Soylu claimed her family had ties to terrorism and that he would not let the police be criticized over someone like her.

Demirel said such accusatory remarks by a minister would encourage people who might want to harm her.

On Monday, speaking to the Artı Gerçek news website, Demirel said she was sexually harassed by a police officer during a protest demanding the release of lawyers under arrest in Turkey. The moments of the alleged assault were captured on camera.

On Wednesday Turkey’s minister of interior affairs, Süleyman Soylu, claimed that Demirel, whose apparent sexual harassment by a police officer during a protest on Saturday was captured on camera, was a “project” used to smear the police force.

Defending law enforcement, Soylu reiterated a police statement issued on Monday claiming that the student’s father was a purged Gülenist and her brother was linked to the far-left Revolutionary People’s Liberation Party/Front (DHKP/C) DHKP-C.

In a statement on Monday, the Ankara Police Department rejected the harassment allegations and even accused the woman of being the daughter of a father who has links to the Gülen movement.

The Gülen movement is labeled a terrorist organization by the Turkish government, which holds the movement responsible for a failed coup attempt in July 2016. The movement strongly denies any involvement in the abortive putsch.

In the statement posted on its website, the Ankara Police Department said Demirel’s father was a teacher who was removed from his post in 2016 due to his ties to the Gülen movement. He was fired because he was a member of a Gülen-linked labor union, according to the statement.

When asked about the Ankara Police Department’s claim about her father on Tuesday, Demirel said: “He [her father] has never been prosecuted. He was just removed from his post and then submitted a petition to [Parliament’s] Justice Commission about his ordeal. That is it. He was neither detained nor arrested [over Gülen links].”

The Turkish government launched a massive crackdown on alleged or real members of the movement following the coup attempt under the pretext of an anti-coup fight as a result of which more than 150,000 people were removed from state jobs.

Demirel was accompanied by opposition deputies Sezgin Tanrıkulu and Ömer Faruk Gergerlioğlu, who are also rights activists, when she filed a complaint at the Ankara Courthouse.

In the complaint Demirel said she was intentionally harassed by the police officer who was trying to detain her. The woman attached the photos of the alleged sexual assault to her petition.

Demirel asked for the identification of the police officer as well as his arrest for violating his duties as a public officer.