“Vile” comments by Turkey’s president outraged Australians. But this is what his people want you to know he “actually said”.

Mr Morrison says he is expecting the “highly offensive” comments to be withdrawn while he weighs up exactly what to do next.

“Your grandparents came here … and they returned in coffins,” Mr Erdogan said at a campaign rally ahead of upcoming elections, a reference to the bloody WWI battle at Gallipoli where more than 8000 Australians died.

“Have no doubt we will send you back like your grandfathers,” Mr Erdogan said.

He showed footage of the Christchurch attack and promised that if New Zealand refused to punish Australians his government would.

“You heinously killed 50 of our siblings. You will pay for this. If New Zealand doesn’t make you, we know how to make you pay one way or another,” Mr Erdogan said.

Mr Morrison summoned Turkish ambassador Korhan Karakoc to Parliament House on Wednesday and later said he does not “accept the excuses that have been offered for those comments”.

Australia will review its travel advice for Turkey, which already urges Australians to exercise a high degree of caution given the threat of terrorism in Istanbul and elsewhere.

A senior government national security source told The Australian the President’s comments were being seen as a call to arms for Jihadists to attack Australians on the eve of Anzac Day — a time where thousands of Australians make the annual pilgrimage to Anzac Cove.

Mr Morrison on Wednesday said he was offended by the remarks and wants them withdrawn.

“Remarks have been made by the Turkish President Erdogan that I consider highly offensive to Australians, and highly reckless in this very sensitive environment,” Mr Morrison said.

“I am expecting, and I have asked, for these comments to be clarified, to be withdrawn.

“I’ve asked for these comments, particularly their reporting of the misrepresented position of Australia on Turkish television, the state-sponsored broadcaster, to be taken down and I expect that to occur.”

New Zealand has responded swiftly to the comments, too, sending its foreign minister to Ankara to demand an explanation.

The official explanation from Turkey at this stage is that Erdogan was responding to the manifesto released by Tarrant, a 73-page document he uploaded to the internet.

The manifesto mentioned Turkey and the minarets of Istanbul’s famous Hagia Sophia, now a museum, that was once a church before becoming a mosque during the Ottoman Empire.

“President Erdogan’s words were unfortunately taken out of context,” Fahrettin Altun, communications director for the Turkish presidency, wrote on Twitter. 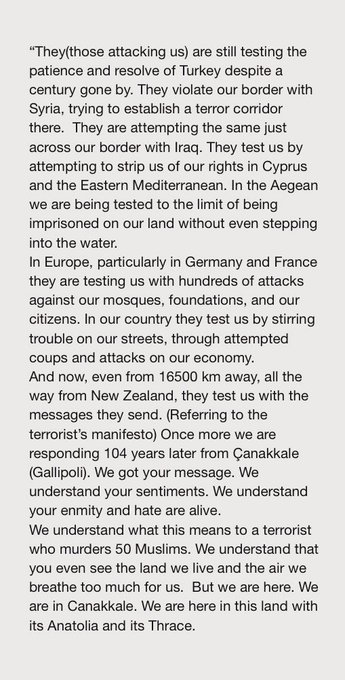 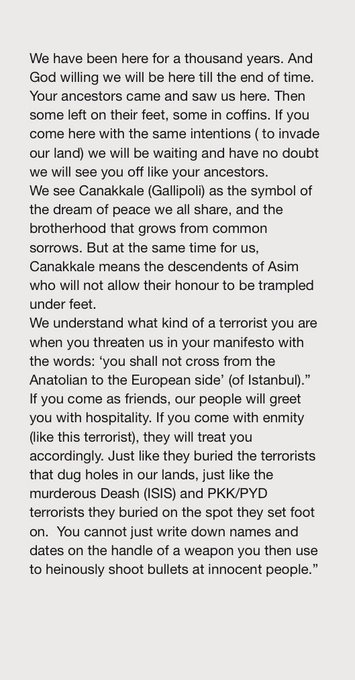 Within the context of what I explained below, here is the translation of what @RT_Erdogan actually said:

Altun said Erdogan’s comments were in “a historical context of attacks against Turkey, past and present” in a speech delivered on the 104th anniversary of the Gallipoli campaign.

“Turks have always been the most welcoming and gracious hosts to their #Anzac visitors,” he added, referring to Australian and New Zealand veterans and families.

He said Australians travelling to Turkey should exercise common sense and cautioned that travel advice for Turkey was under review.

“I will wait to see what the response is from the Turkish government before taking further action, but I can tell you that all options are on the table,” Morrison said.

In fiery remarks, Morrison accused Erdogan of betraying the promise of Mustafa Kemal Ataturk — a revered figure in Turkey — who helped forge peace between the two countries.

A memorial at the battlefield carries Ataturk’s words: “There is no difference between the Johnnies and the Mehmets … after having lost their lives on this land they have become our sons as well.”

“Ataturk sought to transform his country into a modern nation and, an embracing nation, and I think these comments are at odds with that spirit,” Morrison said.

New Zealand’s Deputy Prime Minister Winston Peters protested on Monday that such politicisation of the massacre “imperils the future and safety of the New Zealand people and our people abroad, and it’s totally unfair”.

The accused gunman, a self-avowed white supremacist, livestreamed much of the attack. He claimed it was a strike against Muslim “invaders”.

“This is not an isolated event, it is something more organised,” Erdogan said on Monday.

“They are testing us with the message they are sending us from New Zealand, 16,500km from here.”

Turkey And Russia Fight It Out: Is This The End Of The Road For Erdogan?
NAT 23rd February 2020