100 years after genocide, Armenians in Turkey revive their identity

100 years after genocide, Armenians in Turkey revive their identity

Last month, in the lead up to Turkey’s recent mayoral elections, Mesrob Mutafyan, the Armenian Patriarch of Constantinople (modern-day Istanbul), died following a long illness. While this was expected, what happened next was not: Turkey’s President Recep Tayyip Erdoğan tweeted a message of condolence to Turkey’s Armenian community in the Armenian language.

This was a surprise because, for decades, Armenians in Turkey who survived a genocide committed by Turkey’s predecessor state — the Ottoman Empire — remained largely underground. The genocide began in 1915, during World War I, when the Ottomans accused Armenians of holding sympathies for Russia, their opponents, and led a campaign of ethnic cleansing that left an estimated 1.5 million Armenians murdered or displaced.

Those who survived either concealed their ethnicity or left their infant children with sympathetic Muslim villagers to raise them. Scholars estimate that about 200,000 Armenians converted to Islam to survive.

Istanbul, the capital of what later became the Republic of Turkey in 1923, was the only city where a cohesive and openly Armenian society remained.

Over 100 years later, Erdoğan’s attempts to connect with Armenians before the elections confirmed that Turkey’s Armenian community is once again a recognized component of Turkish society.

Ultimately, Erdoğan’s ruling Justice and Development Party (AKP) suffered defeats in long-held major urban centers like Istanbul, Ankara, and Izmir. As Erdoğan attempts to annul and repeat the Istanbul vote, the small Turkish Armenian community in Istanbul — only about 50,000 of the city’s 15 million residents — remain stunned with this renewed attention during the mayoral elections. 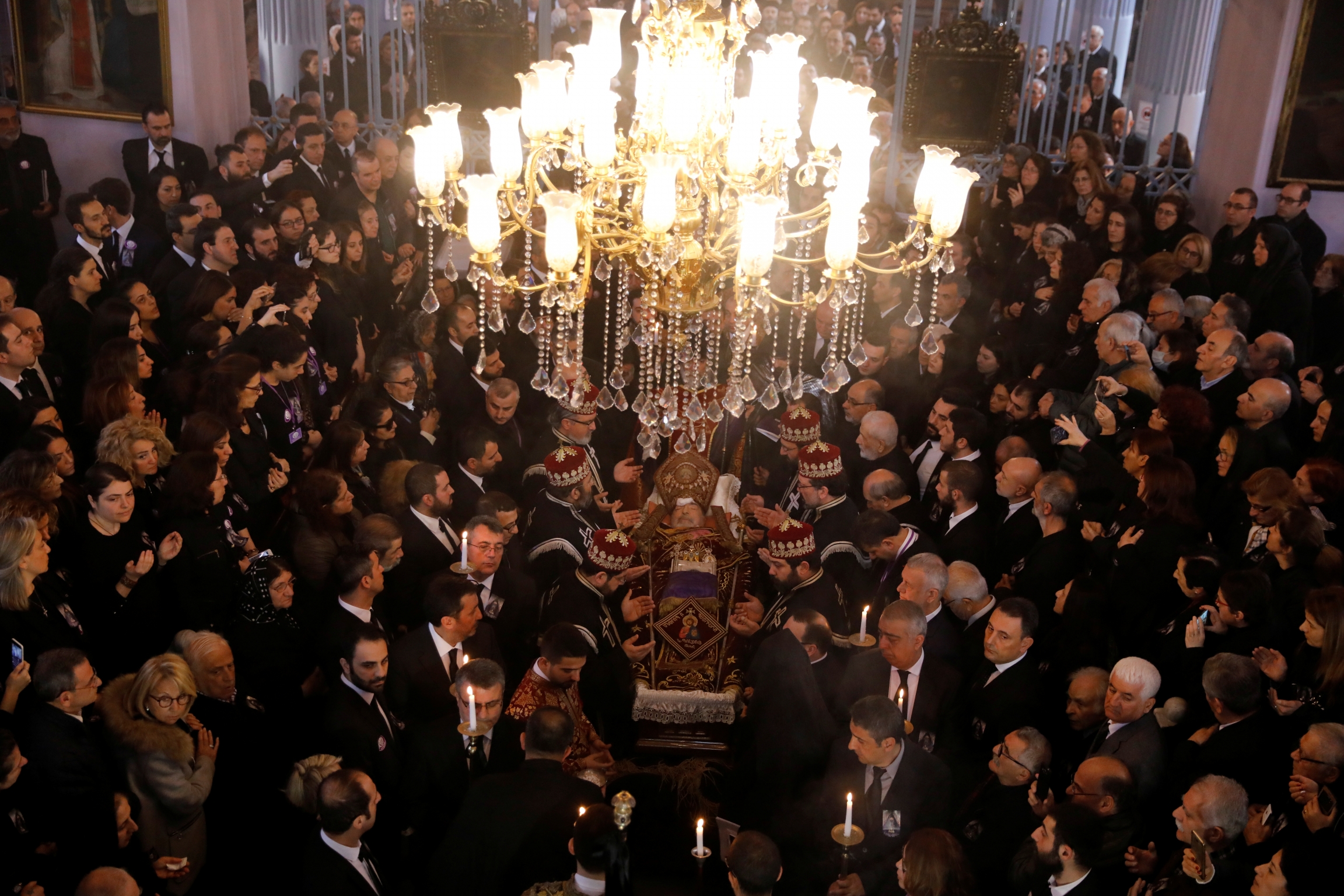 A turning point came for underground Armenians when, in 1996, Turkish Armenian journalist Hrant Dink founded a newspaper called Agos. The paper, published in both Turkish and Armenian, was the first Armenian-language newspaper in the Republic of Turkey’s history.

Agos’ office, located in an unassuming high-rise in Istanbul’s Şişli district, boasts its epic history of Armenian heritage: flowing runes of the Armenian script abound — a rare sight in the Bosporus city.

“Before Agos [newspaper], the situation of Armenians in Turkey was almost unknown. … When we started, no one knew how many Armenians were in Turkey.” 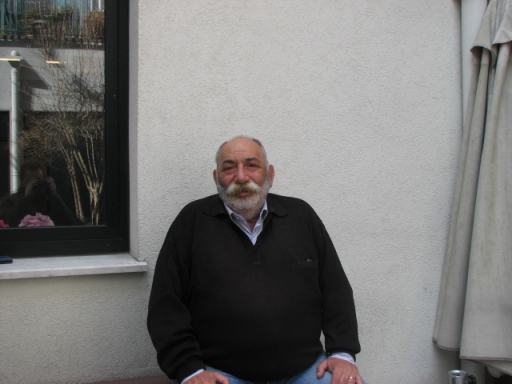 “Before Agos, the situation of Armenians in Turkey was almost unknown,” says Pakrat Estukyan, a veteran journalist with the paper, as he finishes his first of many cigarettes during the interview. “When we started, no one knew how many Armenians were in Turkey.”The paper aims to educate Turkish society about its still-extant Armenian element, including Turkish Armenians. “Many Turkish Armenians can’t read the [Armenian] alphabet,” Estukyan says, explaining that the decision to publish in two languages was as much for Istanbul’s Armenian community as it was for Turks themselves.As the paper’s stature grew, so did the attention — and not all was positive.“We first started getting threats when Hrant began publishing excerpts from Raymond Kevorkian’s [a French Armenian historian] book, discussing the Armenian heritage of cities like Van, Mush, Diyarbekir,” Estukyan says. The cities named, all in the far eastern part of Turkey known as Anatolia (previously known as Western Armenia), each had a large Armenian population until 1915.Dink was prosecuted three times under Article 301 of the Turkish penal code for “denigrating Turkishness.” The largest escalation came in 2004 when Dink released an article claiming Sabiha Gokcen, Turkey’s first female fighter pilot and the adopted daughter of Mustafa Kemal Ataturk, the founder of Turkey, had Armenian heritage.

Dink was shot dead by a Turkish nationalist near his paper’s office on Jan. 19, 2007.

Out of the shadows

From tragedy came opportunity. Over 100,000 mourners attended Dink’s funeral, including ethnic Turks who carried placards reading “We are all Hrant Dink.”

“Hrant’s death was a catalyst,” Estukyan says. “After this, people started to come out more openly, to say, ‘I am Armenian.’” Rather than quash the topic, Dink’s murder ignited it.

Avedis Hadjian, a journalist and author of the book “Secret Nation: The Hidden Armenians of Turkey,” agrees. Hadjian traveled the eastern Turkish countryside in historically Armenian areas, looking for signs of Armenian life. He drew on historical records indicating that over 100,000 ethnic Armenians had remained in the region following the genocide.

What Hadjian found astonished him. Significant signs of Armenian heritage and history existed nearly everywhere he went and, in most cases, villagers knew exactly who was Armenian and how they had been hidden.

As Estukyan put it, there were some “crypto-Armenians” who knew their identity and embraced it, some who knew and denied, and others who were unaware. 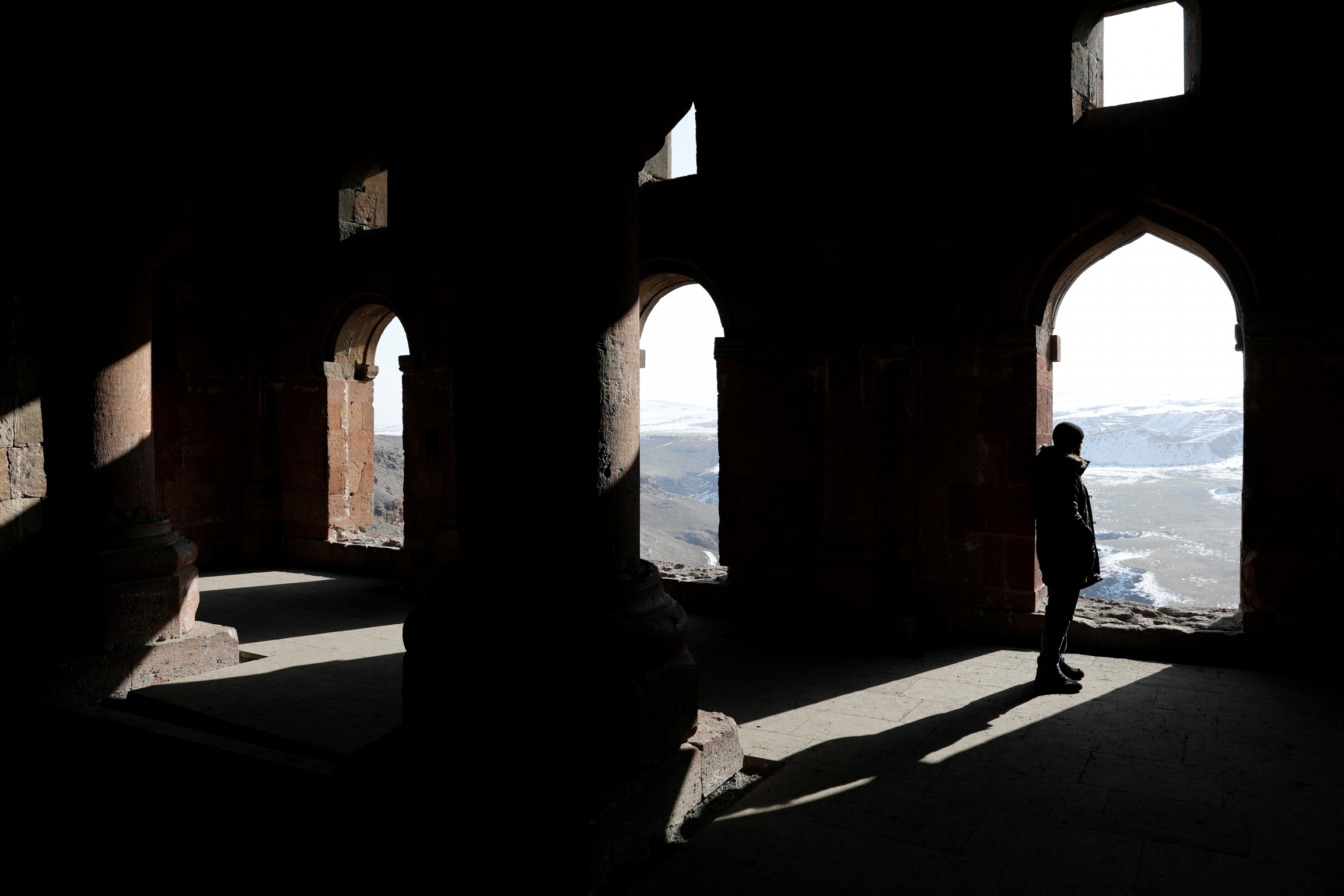 A man looks out from Ebu’l Manuchehr Mosque at the historic ruins of Ani, in Kars province, Turkey, Feb. 8, 2018. The ancient city of Ani was once the capital of a medieval Armenian kingdom that covered much of present day Armenia and eastern Turkey. Credit: Umit Bektas/Reuters

Dink’s assassination, and the 100,000-strong march in support of him and Turkish Armenians in the aftermath provided the immediate momentum for Armenians to reveal their concealed identities in the long-cleansed villages of eastern Turkey.

“Their neighbors knew that they were Armenian, that they had converted during the genocide. … Everyone in these communities has known each other for generations, even centuries.”

“Their neighbors knew that they were Armenian, that they had converted during the genocide,” Hadjian says. “Everyone in these communities has known each other for generations, even centuries.”

This latent awareness provided the background for the reawakening of Armenian identity. But decades of stigma and fear still proved a difficult barrier for many to overcome.

Hadjian adds that a perceived social liberalization between 2007 and 2015— the midpoint of Erdogan’s AKP rule — also contributed heavily to the willingness of Armenian self-identification. “There was a brief window of opportunity,” he says.

By 2015 — the centenary of the Armenian genocide — Turkey’s general elections featured three openly ethnic Armenian candidates to Turkey’s parliament for the first time in history.

Selina Dogan was one of them.

“The problems of not only the Armenians but all [of Turkey’s] minority communities became more visible … in the public sphere.”

A lawyer by trade, she was the leading candidate on the opposition party CHP’s electoral list for the second of Istanbul’s three electoral districts. The moment was “instrumental,” she wrote in an email to The World. “The problems of not only the Armenians but all [of Turkey’s] minority communities became more visible … in the public sphere.”

‘At home in Armenia’

Turkey backslid on its short-lived liberal moment, a process that began in 2013 with the crackdown on the Gezi Park protests and accelerated sharply following the coup attempt in July 2016. 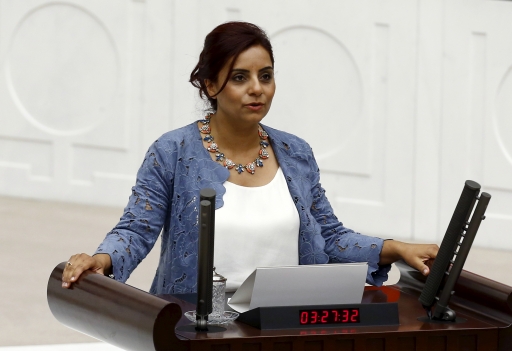 Dogan — a political insider from her time as an opposition candidate — became acutely aware of growing resentment. “Hate speech … dominated the political scene, the parliament became too dysfunctional, with increasing populist rhetoric,” she recalls.Some of the Armenian community’s autonomy also rolled back. “It’s been 12 years [since we could elect our Patriarch,” she says. The Turkish government has repeatedly canceled the election of a new Armenian Patriarch of Constantinople, something Istanbul’s Armenian community had requested since 2008 when the then-Patriarch (now deceased) fell into a coma and became unable to perform his duties.Dogan also notes “financial and infrastructural problems” of Armenian schools, run separately from Turkish schools under ethnic minority status, which have also seen enrollment drop in recent decades, owing partly to difficulties receiving state funding.At the same time, Turkish Armenians have found new hope in seeing a revived interest in Yerevan, the capital city in the Republic of Armenia, a former Soviet state.The civil war in neighboring Syria has generated more than five million refugees, including many from Aleppo — the center of Syria’s Armenian community. An estimated 22,000 Syrian Armenians have fled to Armenia since the war began in 2011.

Watching the warm reception provided for their ethnic compatriots by their estranged motherland — most of which their ancestors never saw — spurred new attention to Yerevan among Turkey’s Armenians.

“It was amazing when I first saw [this sentiment] in Turkey, but it’s very common,” Hadjian says. “They [Turkish Armenians] feel very at home in Armenia, they are very warmly received.”

Most Turkish Armenians had little contact with the Republic of Armenia, divided first by the Cold War and then by the closed border that has existed between Turkey and Armenia since 1993, which was declared as a gesture of Turkish support for Azerbaijan during the Nagorno-Karabakh War.

“The destruction of Aleppo had a big impact [on Armenian reawakening in Turkey]. … Ten years ago, many Turkish Armenians dreamed of a [US] green card. Now they want [Republic of Armenia] citizenship instead.”

Estukyan has seen this as well. “The destruction of Aleppo had a big impact,” he said. “Ten years ago, many Turkish Armenians dreamed of a [US] green card. Now they want [Republic of Armenia] citizenship instead.”

It’s still too early to talk about reconciliation between Ankara and the Republic of Armenia or to expect movement on the genocide recognition issue in Turkey, but “Armenianness” is no longer a black mark.

Tags:
Previous Article
In cozying up to Russia, Turkey’s Erdogan is taking a huge gamble
Next Article
Columbia Reschedules Canceled Panel on Turkey