In cozying up to Russia, Turkey’s Erdogan is taking a huge gamble

In cozying up to Russia, Turkey’s Erdogan is taking a huge gamble 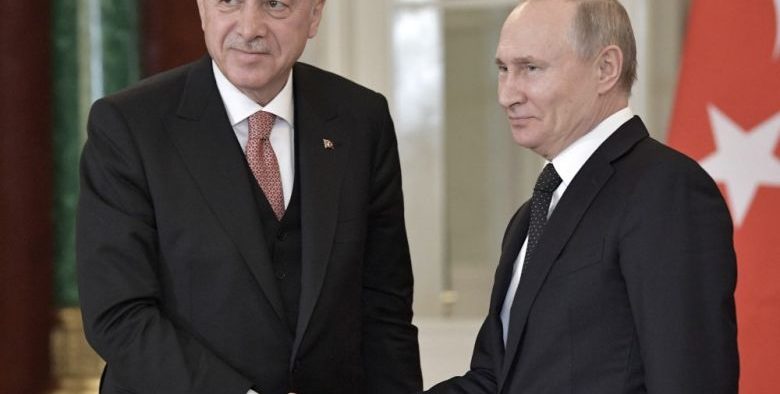 The United States and Turkey are on a collision course, and Turkey’s future as a member of the North Atlantic Treaty Organization (NATO) is also on the line.

The immediate cause of the contretemps is that Turkey has committed to buying Russian S-400 anti-aircraft missiles. The United States claims that these missiles are not compatible with the new F-35 Stealth fighter, which Turkey has also committed to buy.

The Turks have been part of the F-35 consortium almost from the beginning and are manufacturing F-35 parts as part of the consortium. Turkey has even received the first two of some 100 aircraft, although these two fighters remain in the United States. The Americans believe that not only is the Russian missile system not compatible with the F-35s, but that the technology of the two systems will bleed into each other, giving the Russians invaluable insight into the F-35’s capabilities. As of this moment, the United States has stopped taking delivery of Turkish-manufactured F-35 parts and U.S. military leaders have urged their government to cancel the decision to sell the advanced fighter to Turkey.

The Americans believe that not only is the Russian missile system not compatible with the F-35s, but that the technology of the two systems will bleed into each other

The United States is not alone in rejecting Turkey’s decision to buy the Russian missiles; other NATO countries are also uneasy. The Turkish decision appears to be a deliberate swipe at both the United States and NATO, giving rise to speculation that Turkey is set on warmer relations with Russia even at the cost of jeopardizing its NATO membership.

Turkey has been a member of NATO since 1952 when it, and arch rival Greece, joined the Alliance. At that time the two nations were considered geographically vital to NATO and were believed to be forming a “southern flank” to the Alliance and bolstering the northern shore of the Mediterranean in containing the Soviet Union. One of Turkey’s key assets was its Incirlik Air Base, on Turkey’s southern shore and very close to Syria. It is still a major U.S. and NATO base and is said to hold hundreds of American tactical nuclear weapons.

Turkey today is a long way from the Turkey of 20 years ago. Then the nation was considered a moderate Muslim democracy with a thriving free-enterprise system and growing democratic values in its courts, free press and representative government. Indeed in the late 1990s and the early 2000s, there was much talk of Turkey eventually joining the European Union. A series of exploratory talks even took place to determine how and under what circumstances the union of Turkey and the EU would take place.

The discussions never went anywhere. The rise of Islamic terrorism in Europe in the 2000s no doubt contributed to the growing unease of “Christian” Europeans about a union with Turkey, which could have led to a rise in Turkish immigration to all parts of the EU. None of the terrorism that struck the EU from Britain to Spain to Germany, France and the Low Countries was ever attributable to Turkey or Islamic groups within Turkey, but the attacks no doubt cooled the ardour of the EU.

The growing reticence of the EU for a union with Turkey was paralleled by the rise of Recep Tayyip Erdoğan and his Justice and Development Party. Describing himself as a conservative democrat, Erdoğan came from an Islamist political background that was, at heart, almost the exact opposite of the anti-religious views of the founder of modern Turkey, Mustafa Kemal Atatürk. A former officer in the Army of the Ottoman Empire, Atatürk took power shortly after the First World War determined to eliminate the power of Muslim religious authorities so as to drag Turkey kicking and screaming into the modern world. Erdoğan was interested in just the opposite, restoring Islam as a central tenet of Turkish life.

In March 2003, Erdoğan was elected to the Turkish parliament and began his march to power. Today, after a failed military coup in 2016, he rules with an iron hand.

One other factor that stands between the U.S. and Turkey is the fate of Syria’s Kurdish population. The Syrian Kurds played a vital role in the defeat of the Islamic State, but now that ISIL is no more, Erdoğan wants to eliminate them as a factor in the region while the U.S. continues to act as their protector.

In cozying up to Russia, Erdoğan is taking a huge gamble. Russia and Turkey have been rivals for centuries with religion, ethnicity and geopolitics pitting one against the other. NATO has never had territorial designs on Turkey; Russia is a different matter.

David J. Bercuson is a fellow of the Canadian Global Affairs Institute and director of the Centre for Military, Security and Strategic Studies at the University of Calgary.