THE THIRTY-YEAR GENOCIDE
Turkey’s Destruction of Its Christian Minorities, 1894-1924
By Benny Morris and Dror Ze’evi

Using the word “genocide” to describe an episode of mass killing has consequences. If the horrors are unfolding now, it invites other countries to intervene and punish the perpetrators. If the unspeakable events are in the past, the word’s use can affect the way they are discussed, by historians or ordinary people. Once the term “genocide” has been established, it can seem tasteless or morally impossible to talk in much detail about the context in which mass murder occurred. Any speculation about precise motives or catalysts can sound like making excuses.

But one merit of “The Thirty-Year Genocide,” about the agonies suffered by Christian subjects of the Ottoman Empire immediately before and after its collapse, is that the authors overcome that problem. Their narrative offers a subtle diagnosis of why, at particular moments over a span of three decades, Ottoman rulers and their successors unleashed torrents of suffering.

The book examines three episodes: first, the massacre of perhaps 200,000 Ottoman Armenians that took place between 1894 and 1896; then the much larger deportation and slaughter of Armenians that began in 1915 and has been widely recognized as genocide; and third, the destruction or deportation of the remaining Christians (mostly Greeks) during and after the conflict of 1919-22, which Turks call their War of Independence. The fate of Assyrian Christians, of whom 250,000 or more may have perished, is also examined, in less detail.

The authors are distinguished Israeli historians. Benny Morris, a chronicler of the fighting that attended Israel’s birth, has written bluntly about incidents in which Arabs were killed or expelled. He also argues (contentiously) that it would have been better if the result had been total separation between Jew and Arab. His co-author, Dror Ze’evi, is a fellow professor at Ben-Gurion University of the Negev. 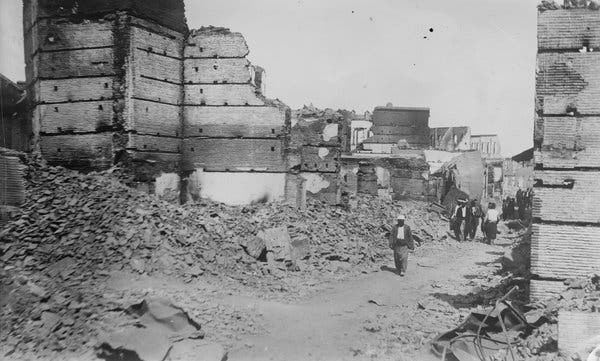 A street in Adana, in the aftermath of the Armenian massacres of 1909.CreditLibrary of Congress

Each of their chosen episodes occurred at a particular historical moment. The first unfolded in an Ottoman Empire that was at once modernizing and crumbling, while in chronic rivalry with the Russians. The second took place when the Turks were at war with three Christian powers (Britain, France and Russia) and were concerned about being overrun from west and east. During the third, Greek expeditionary forces had occupied the port of Izmir, with approval from their Western allies, and then marched inland.

An impressive chapter explains the buildup to the 1894-96 massacres. It describes the strain imposed on rural Anatolia by newcomers fleeing Russia’s march through the Caucasus, and the transformation of the Armenians from a religious minority into a political community feared by the Ottomans.

This story is told with a feeling for shading and nuance. Yet there is a paradox about the book. As diligent historians, Morris and Ze’evi acknowledge many differences between the three phases of history they recount. (For example, different regimes were involved: in the first case, the old guard of the empire; in the second, a shadowy clique of autocrats; in the third, a secular republic.)

But their self-imposed mission is to emphasize continuity. As they argue, the Armenian death marches of 1915-16 are by now well documented, and their status as a genocidal crime, with one million or more victims, well established. By contrast, they feel, things that happened at the beginning and end of their chosen 30 years need to be better known, so that all the travails of the Ottoman Christians over that time can be seen as a single sequence.

Between 1894 and 1924, they write, between 1.5 million and 2.5 million Ottoman Christians perished; greater accuracy is impossible. Whatever the shifts in regime, all these killings were instigated by Muslim Turks who drew in other Muslims and invoked Islamic solidarity. As a result the Christian share of Anatolia’s population fell from 20 percent to 2 percent.

Well, all those statements are accurate as far as they go, and they reflect one aspect of the multiple tragedies that attended the region’s lurch toward modernity. Yet it remains difficult to express the authors’ core case in a single true-or-false proposition. Are they suggesting that Islam is intrinsically violent? No, they reject that view. Are they implying that a 30-year plan was formulated and then implemented, albeit by different regimes? At times, they hint at something like that. But their skill as historians holds them back from saying anything so crude.

In one of their best passages, Morris and Ze’evi carefully discuss possible interpretations of the 1915-16 blood bath, and offer comparisons with debates about Hitler’s Holocaust. As they note, historians have disputed how far in advance the mass annihilation of Jews was dreamed up. Regarding the Armenians, they say, there is no doubt that the death marches that began in April 1915 were centrally coordinated. But there have been reasonable arguments over how long in advance they were planned, and whether it was always intended that most victims would die.

Sifting the evidence, Morris and Ze’evi conclude that the Ottoman inner circle began planning deadly mass deportations soon after a Russian victory in January 1915. However, Ottoman policy was also shaped and hardened by the battle of Van, in which Russians and Armenians fought successfully, starting in April 1915. These conclusions rest on careful analysis.

But they are less confident about the fate of the Greek Orthodox subjects of the Ottoman Empire from 1919 to 1922. They document many horrifying incidents but these do not add up to a fluent story.

Morris and Ze’evi vigorously challenge the Turkish argument that after World War I Greek separatism in the Black Sea region posed a danger to the emerging Turkish state requiring deportation. The authors maintain that agitation for a state on the Black Sea was never serious, and that Greeks in that region never offered much resistance to the Turkish regime. Neither of those statements is completely accurate. Greek Orthodox guerrillas held out in the Black Sea hinterland with tenacity.

What is more, by challenging the Turkish justification for the Black Sea deportations, Morris and Ze’evi almost imply that if there had been a military threat in that region, the marches and deportations might have been morally right. This leads to a wider point about the book as a whole.

The reader is left wondering what the authors ultimately feel about the treatment of civilians in situations of total war. Nothing in the United Nations conventions implies that military expediency can justify the removal, whether by ethnic cleansing, killing or both, of populations whose presence is inconvenient. But by weighing up arguments for and against certain acts of expulsion, Morris and Ze’evi seem at times to be taking a less purist view.

There is no doubt that during the Ottoman collapse, millions of Christians died or suffered because humanitarian principles were grossly violated. But they were not the only victims. Consider the wars that drove most Muslims out of the Balkans, starting in the early 19th century and arguably culminating in the genocidal acts suffered by some Bosnian Muslims in 1995. Hundreds of thousands of Islam’s followers were killed and millions displaced, often finding refuge in Turkey. If the era that gave birth to homogeneous post-Ottoman states is to be told as a single narrative, it must surely look on both sides of the mirror.

Bruce Clark writes on religion and society for The Economist. He is the author of “Twice a Stranger,” a study of the Turkish-Greek population exchange.