Turkish sports broadcaster S Sport will not air the NBA’s Western Conference finals between the Golden State Warriors and Portland Trail Blazers because of the political stance of Portland center Enes Kanter, a vocal opponent of the country’s president, Recep Tayyip Erdogan.

“I can say clearly that we will not be broadcasting the Warriors-Blazers series,” S Sport commentator Omer Sarac told Reuters. “Furthermore, if Portland makes it to the finals, [that] will not be broadcast either. . . . This situation is not about us, but it is what it is.”

S Sport is the NBA’s primary television outlet in Turkey, according to Reuters. The games will still be available in Turkey on NBA TV International and NBA League Pass, according to the league.

Kanter is a vocal critic of Erdogan’s government for its human rights record, and he has aligned himself with exiled Muslim cleric Fethullah Gulen, whom the government accuses of orchestrating a failed coup in 2016. Gulen, a permanent U.S. resident, lives in exile in Pennsylvania.

Kanter, 26, is wanted for arrest in his home country, and Turkish news outlets, largely controlled by the Erdogan government since the coup attempt, describe him as an enemy of the state rather than Turkey’s most accomplished basketball player.

“All these NBA fans, they want to watch the Western Conference finals, but they can’t all because of me. It’s funny and crazy. [The Turkish government] is afraid of an NBA player,” Kanter said in a phone interview Tuesday. “I’m not a politician. It’s not my job, but everyone is so scared of Erdogan that I have to step up and speak out for freedom and human rights. It shows it’s a dictatorship in Turkey.”

Kanter said Turkish broadcasters also did not televise the 2016 Western Conference finals between the Warriors and Kanter’s Oklahoma City Thunder.

“I remember getting all these comments from Turkish people,” he said. “They were so mad at me because they couldn’t watch the games. I kept saying, ‘It’s not my fault.’ ”

This is the second time during this year’s playoffs that Kanter has been censored in his home country. The NBA’s Turkish Twitter account scrubbed him from its tweets during Portland’s second-round series against the Denver Nuggets. That led the NBA to fire the local social media vendor that ran the account.

Kanter said in the aftermath it was a sign that whoever managed the account was frightened of crossing the Erdogan regime.

“They know if they put my name out there, they could get in trouble or they might even end up in jail,” he said at the time. “That shows it’s a dictatorship. That shows there’s no freedom of speech in Turkey.”

Kanter has not returned to Turkey since 2016; upon leaving, the government canceled his passport and attempted to detain him before he could return to the United States. Since, he has called Erdogan, “the Hitler of our century,” and has not left the U.S. or Canada, saying he fears arrest or assassination by Turkish agents.

In January, Erdogan asked international law enforcement agencies in January to detain Kanter and remand him to Turkish authorities.

Facing heightened threats, Kanter did not travel with Portland to play Toronto in March.

“If the Portland Trail Blazers and the Toronto Raptors both reach the NBA Finals, Mr. Kanter will again have to consider the security risks associated with work-related travel outside the U.S.,” Wyden wrote in the letter, which Kanter posted on social media. “As President Erdogan continues taking Turkey down a dark, authoritarian road, Mr. Kanter is hardly the only person to face persecution. But without his Turkish passport — and not yet able to qualify for an American passport — Mr. Kanter does find himself in a particularly tenuous legal position resulting from being a public person using his bully pulpit to speak out against a dangerous bully.”

Wyden asked Trudeau to state publicly that Canada would not honor the “red notice” Turkey submitted via Interpol to ask foreign countries to detain Kanter. 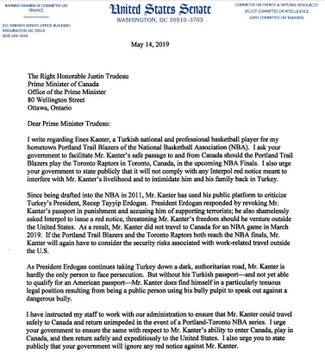 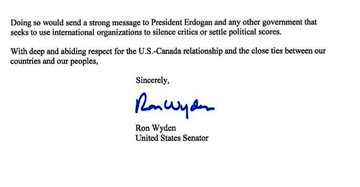 Kanter over the weekend posted a Mother’s Day greeting video on Twitter, hoping it would reach his mother, whom he has not seen since last departing Turkey. In that time, his father, a former university professor, has been jailed over his son’s political position. “Just be proud of your son because your son is sacrificing everything to stand tall for human rights, democracy and freedom,” Kanter said in the video. 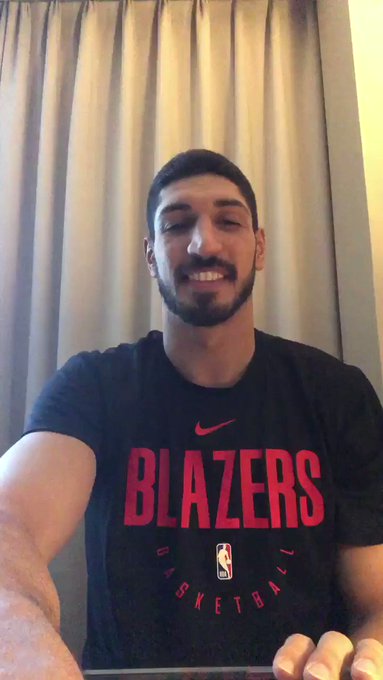 Can you please help me share this message for my mom ?
Thanks a lot

I LOVE YOU MOM

“I wanted to celebrate her for Mother’s Day,” he said in the phone interview. “I thought, I cannot call her. I cannot text her, so I thought, I’ll make a video for her.”

Kanter calls himself Gulen’s “adopted son,” since communicating with his biological family or friends in Turkey would put them in danger, he said.

Game 1 of the Western Conference finals begins Tuesday at 9 p.m., and will be televised in the United States on ESPN.

Tags:
Previous Article
The battle of Istanbul will shape Turkey’s future
Next Article
Erdogan’s expanding dictatorship is steering Turkey toward a dead end