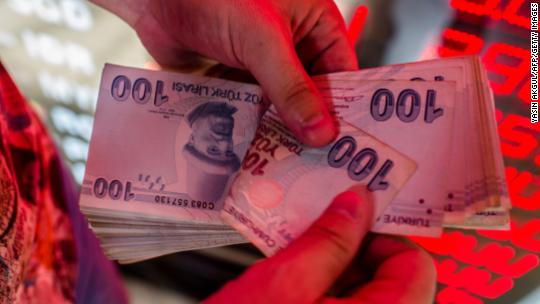 Turkey is the world’s leading jailer of journalists.

While tens have been sentenced in recent years on charges such as insulting the president and “terrorist propaganda”, Bloombergreporters Kerim Karakaya and Fercan Yalinkilic are among the first to face imprisonment over reporting on the economy.

The Istanbul chief prosecutor on Thursday accepted an indictment against the journalists and 36 other people after a complaint filed last year by Turkey’s banking watchdog, the BDDK.

They are accused of attempting to undermine Turkey’s economic stability and could face up to five years in prison if found guilty.

The first session of the trial will take place in September, according to Bloomberg.

“We condemn the indictment issued against our reporters, who have reported fairly and accurately on newsworthy events,” Bloomberg Editor-in-Chief John Micklethwait said.

“We fully stand by them and will support them throughout this ordeal.”

“The necessary legal avenues will be resorted to in the future concerning similar publications that could damage the prestige of our banks and our economy or harm our sector,” it added.

The indictment, seen by Reuters, refers to a story published by Bloomberg in August 2018 about the sharp decline in the Turkish lira and how the authorities and banks were responding to it.

Turkey’s economy underwent a dramatic downturn last year amid tensions with the US and investor worries about the independence of the Turkish central bank.

The country is still enveloped in an economic crisis.

Fitch also rates Turkey with a negative outlook, while Standard and Poor’s evaluate the country’s credit rating with a stable outlook.

S&P Senior Director Frank Gill said last week that the lira had been “fundamentally undervalued” and that Turkish exports were perfoming well.

The other 36 defendants are also facing jail time over social media comments on the Bloomberg report or comments “critical” of Turkey’s economy.

Turkey’s securities markets regulator, the Capital Markets Board, said it had filed a criminal complaint over social media posts, but did not name or number the people involved.

Those targeted in the complaint had sought to sow tension in markets and damage investors, the board said.

The Interior Ministry had also last year identified 346 social media accounts whose posts about the exchange rate it said had created a “negative perception” about the Turkish economy.

The ministry said that it would take legal measures against them but did not specify what those would be.

Freedom of the press

Government critics have pointed to the indictment as exmplerary of decling press freedoms in Turkey.

“The notion that Bloomberg’s meticulous financial reporting could somehow be a threat to Turkey’s economic stability and a violation of its laws is hard to fathom,” Joel Simon, Executive Director of the Committee to Protect Journalists, said. “[The] indictment represents a further escalation of Turkey’s press freedom crackdown and is of deep concern.”

The US Embassy in Ankara also criticised the Turkish government over the case.

“Freedom of expression and press strengthens democracy and needs to be protected everywhere,” it said in a tweet on Friday. “Charging journalists for doing their jobs is antithetical to this universal principle.”

Turkey’s Ministry of Foreign Affairs later hit back in a tweet saying that the freedoms of the press and expression were expressly protected in the country’s constitution.

“This right, however, cannot condone actions against the law and promotion of terrorism under the guise of journalism,” the ministry clarified.