Erdoğan: We Desire a More Pluralistic Turkey with a Freer Press

Erdoğan: We Desire a More Pluralistic Turkey with a Freer Press 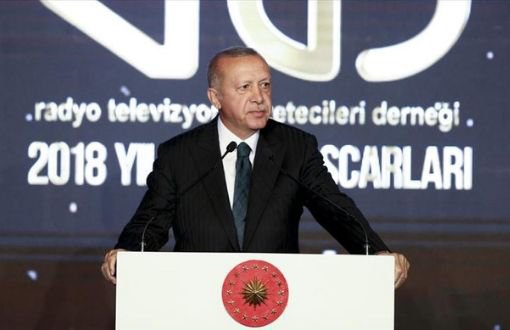 President and ruling Justice and Development Party (AKP) Chair Recep Tayyip Erdoğan made a speech at the prize-awarding ceremony of Radio and Television Journalists Association in İstanbul yesterday (August 29).

Addressing a series of issues including the national and international media and Gezi Park protests, Erdoğan indicated that “they want a country not only with a strong economy, defense, trade, infrastructure and diplomacy, but also with a strong democracy and freer press.”

Referring to the “stunning progress in communication technologies”, Erdoğan said, “These new media tools come with very serious risks and dangers. In no periods of our lives were we subjected to so much disinformation. Today, the dominance of lies and provocative news on social media, where there are no regulations, is many times more than the truths.”

Indicating that “the Internet creates a large dump of information with its own media and social networks”, he indicated, “The true information and news based on evidence is being gradually replaced with information based on presumptions, speculations, distortions and manipulation.”

Within this context, Erdoğan also referred to the Gezi Park protests:

“Fabricated news do not only threaten people, but today’s democracies as well. Like several countries of the world, Turkey and democracy of Turkey are not free from this threat. The incidents of the last six years have, unfortunately, manifested this harsh reality for many times.

“In Gezi incidents, with so many fabricated news that have nothing to do with our country, they tried to provoke our nation, especially our youth. Our streets were set on fire. The goods of our store keepers were plundered. Municipality busses with passengers on board were set on fire.”

Erdoğan also stated the following about the international media:

“We saw that all together how the foreign media outlets that define themselves as free and objective turned into a propaganda machine instead of doing journalism when it comes to Turkey. We still remember the news reported on the night of July 15 as a proof of shame. We witness the disappointment felt by the failure of the coup attempt on headlines.

“The steps that we take in the direction of economy, democracy, counter-terrorism and protection of regional peace and stability are not reported in the international media in the way it deserves.

Indicating that “Turkey can compromise neither its freedom of press, nor national security”, Erdoğan said, “For that reason, we have to carry on our path by striking a balance between freedom and security.” (EMK/SD)

Tags:
Previous Article
Syria safe zones: what is driving the unexpected rapprochement between the US and Turkey?
Next Article
Malaysia deports a Turkish asylum seeker and his family without due process