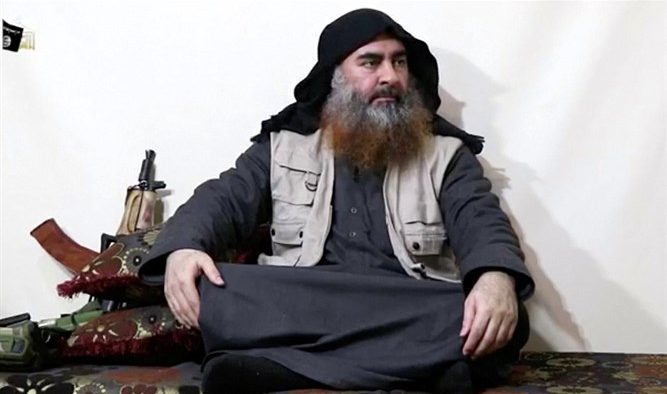 Did Turkey really cooperate with the US army during the daring operation that led to the death of ISIS-leader Abu Bakr al-Baghdadi and why is Turkey now suddenly active in hunting down and capturing relatives of the ISIS boss as it claims?

Observers are asking questions about Turkey’s real contribution to the capture of al-Baghdadi while some of them suggest that the regime in Ankara didn’t lift a finger to expose the ISIS leader or to limit his movements and those of his accomplices.

If we are to believe Turkey’s autocratic leader Recep Tayyip Erdogan the Turks did know about the operation while MIT the Turkish intelligence service claimed it had “played a key role in the death of Daesh (ISIS) terrorist leader Abu Bakr al-Baghdadi,

Erdogan appears to be proud he ordered his army not to shoot at the American helicopters which flew over Turkish controlled areas in Syria.

The real issue, however, is that the US army decided not to operate from the Incirlik airbase in Turkey.

US President Donald J. Trump said after the operation that the Turks were “terrific” and praised them for not opening fire at the American aircraft that flew the Delta Force to the compound in the Syrian village of Barisha less than five kilometers from the Turkish border.

Here is the real story about Turkey’s role in the war against ISIS and the capture of its leader al-Baghdadi.

In 2015, at the height of ISIS’ ruthless conquest campaign in both Iraq and Syria Turkey’s intelligence service MIT was exposed as an organization that actively helped ISIS and other Jihadist groups in Syria.

Reuters citing testimonies in court by Turkish police officers reported at the time that Erdogan’s regime was letting ISIS terrorists cross the border between Turkey and Syria and delivered arms to them.

Four MIT trucks were caught smuggling weapons to the Syrian Jihadists and when police wanted to seize the trucks they were threatened by MIT officials after which three of the trucks reached their destination in Syria.

Then there was Erdogan’s family which was actively involved in helping the ruthless Jihadist organization.

The New York Post later published an article detailing Erdogan’s regime’s double role in the fight against Islamic State and wondered why the mainstream media wasn’t reporting about it.

Erdogan’s son-in-law Berat Albayrak, for example, was caught helping ISIS selling oil stolen from Syria and Iraq on the black market in Turkey.

“Sümeyye Erdogan, daughter of the Turkish president, reportedly set up an entire medical corps, including a hospital to treat wounded ISIS fighters in Sanlurfa, a city in Southeastern Turkey close to the Syrian border,” according to the American news site.

After the Delta Forces hunted down al-Baghdadi causing him to detonate his explosive belt Mustafa Bali, a spokesman for the Kurdish-led Syrian Democratic Forces suggested that Turkey was aware of the whereabouts of the ISIS leader.

“Turkey has questions to answer on Baghdadi’s case,” Bali wrote in a Tweet.

Middle East experts such as Nicholas Herras pointed to the fact that MIT knows almost everything of significance about what is going on in the Idlib Province where al-Baghdadi was hunted down.

Erdogan now claims members of Abu Bakr al-Baghdadi’s “inner circle” are trying to enter Turkey from Syria and says that his law-enforcement forces have already captured a number of family members of the ISIS leader among them one of al-Baghdadi’s four wives and his sister.

The US State Department, however, says it cannot confirm that the captured people are “genuine” members of al-Baghdadi’s family.

What is sure is that Juma al-Baghdadi a younger brother of the ISIS chief could freely roam Turkish territory and repeatedly traveled to Istanbul where he held briefings and consultations with other ISIS members.

“We were watching somebody who was acting as a messenger to Al Baghdadi and he was traveling frequently to Turkey and back,” a senior Iraqi intelligence official told The National about Juma’s trips to Turkey.

The same official revealed that al-Baghdadi’s brother was meeting a contact in Turkey who brought him messages about logistics, routes, finances, and the shape of ISIS forces from local commanders in Iraq.

Juma also discussed the same topics with ISIS cells in Turkey and could travel back to Syria without any problem according to the Iraqi agent.

Iraqi intelligence and American spy agencies tried to track down the exact location of Juma al-Baghdadi in Syria but lost track of him after five months of research because they were convinced Abu Bakr was hiding in the Deir Ez-Zur region in eastern Syria.

“We were watching somebody who was acting as a messenger to Al Baghdadi and he was traveling frequently to Turkey and back,” the unnamed Iraqi official told The National.

The National asked the office of Erdogan for comment but didn’t receive any response.

Instead, the Turkish autocrat continues to suggest that the Kurdish militia YPG, which is the backbone of the Syrian Democratic Forces, the army that defeated ISIS in Syria, was cooperating with ISIS and helped al-Baghdadi hiding in Barisha, a village within Turkey-controlled territory in Syria

From here it becomes obvious why the US Administration decided not to use the Incirlik airbase in Turkey (200 km away) as launching path for the deadly operation against the ISIS leader but decided to fly in the Delta Force from a base near Irbil in Iraqi Kurdistan at least 700 kilometers from Barisha, a flight mostly over enemy-territory.

An unnamed Trump official, furthermore, told Foreign Policy that “Turkey had not been informed the target was Baghdadi due to concerns the information would be compromised.”