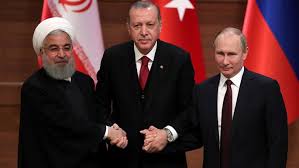 The Turkish Foreign Ministry, which is usually quick to weigh in on world affairs, was silent for hours after the news broke of the killing by the United States of elite Iranian Quds Force commander Maj. Gen. Qassem Soleimani.

The killing sent messages to Turkey’s Islamist government on many wavelengths. At the same time, it unveiled the conflicting strands of Turkey’s regional and wider policy calculus.

Turkey has a deeply pro-Sunni sectarian nature. Iran, an expansionist Shi’ite state, has thus always been problematic for Turkish Islamists. They are divided over whether to support it against the American “Great Satan,” the Great Satan against the Shi’ite Satan, or to simply support every conflict that develops between the two Satans.

Soleimani’s killing has only added to Turkish confusion over Iran, with which it fought its last war in 1639. The two states have ranged since then from friendship to cold friendship to hostility, going through periods of conflict and proxy conflict.

The Turkish Foreign Ministry’s belated statement was dry in its language, reflecting Turkish confusion over what position to take—or, indeed, whether a position should be taken at all. The ministry expressed grave concern over the escalating tensions between the United States and Iran and warned that increasing hostilities in Iraq would destabilize the Middle East and hamper peace efforts.

It said the U.S. move would increase instability and violence: “Turkey has always been against foreign interventions, assassinations and sectarian clashes in the region. We call upon all parties to show restraint and act responsibly, avoiding moves that can threaten the peace and stability in the region.”

Ruling Justice and Development Party (AKP) spokesman Ömer Çellik urged all parties to show restraint. “The security and stability of Iraq is of vital importance to Turkey and to the region. Actions that cause instability in Iraq are detrimental to the entire region,” he said.

Erdoğan’s statement was no less dry. Turkey expends great effort to reduce tensions between the United States and Iran, he said. “Turkey always stands against foreign intervention and considers the recent U.S. attack in Baghdad with this same understanding.” He predicted Iran will respond to the killing of Soleimani, stating, “The choice of the U.S. to kill a top Iranian commander will fuel tensions in the region.”

Such were the official Turkish responses to the drone airstrike that killed Soleimani. Nuances have been revealing themselves, however, in the Islamist/pro-Erdoğan press.

İbrahim Karataş, columnist for the militant Islamist publication Yeni Akit, wrote: “The deaths [of Soleimani and others in his motorcade] are good for the ummah.” Karataş calls Soleimani a murderer and the mastermind of Shi’ite expansionism in the Middle East. “[Soleimani] killed babies for the dangerous ideology called Shi’ism … The Shi’ites do not view Christians or Jews as enemies. Their biggest enemy are the Sunnis. What matters is not who killed [Soleimani]. It is who was killed … With that [killing] Iran will have to deal with the U.S. instead of Muslims.”

The varied responses in Turkey to Soleimani’s death illustrate the contradictory nature of Turkish foreign policy, the difficulty of defining Turkey’s regional interests and the poisonous influence of a Turkish Sunni supremacist worldview.

BY: Burak Bekdil is an Ankara-based columnist. He regularly writes for the Gatestone Institute and Defense News, and is a fellow at the Middle East Forum. He is also a founder of, and associate editor at, the Ankara-based think tank Sigma.

This article was first published by the Begin-Sadat Center for Strategic Studies.