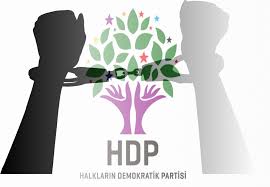 The court in Van province issued the 1,740 Turkish Lira (£222.69) judicial fine after Ms Yukeskdag had given her final defence on Tuesday.

Ms Yuksekdag is the former co-chair of the Peoples’ Democratic Party (HDP) and has been in prison since November 2016 when she was arrested as part of a series of raids on the homes of elected politicians.

She faces aggravated life in prison on trumped-up terror charges, but insisted: “A truth, an idea cannot be punished by being imprisoned for years.”

The revolutionary Marxist said she would not be intimidated into silence, promising the people of Turkey would continue to resist “against a tyrant.

“There is a power greater than Erdogan in this country and it is the people.

“We will never be defeated. We will resist with courage and perseverance against those who tyrannise us … We will win very big and they will be called to account before history.”

Tags:
Previous Article
Greece is good, but Turkey is better
Next Article
Hakan Sukur: How former Turkey star ended up in the US as a taxi driver

Hakan Sukur: How former Turkey star ended up in the US as a taxi driver
NAT 15th January 2020