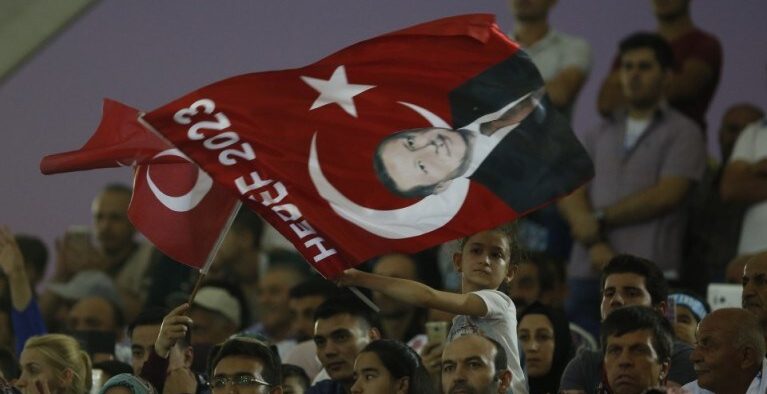 Ece Temelkuran, a prominent Turkish journalist and author, says that right-wing populism is not a passing by political fancy and that it is “a global phenomenon generated by the failures of social equality, also called democracy.”

The author said this in context of how President Recep Tayyip Erdogan has deeply embraced the populist rhetoric during his 17-year reign to remake the political structure of Turkey in recent times.

Erdogan is only “a great example” of the new international wave of politics. “He is just one of the world leaders who filled the vacuum of power as the democracies all over the world deteriorated,” the author told ANI in an email interview.

According to media reports, a quasi-military court had sentenced Erdogan, a former mayor of Istanbul and one of Turkey’s most prominent Islamists, to 10 months in jail in April, 1998, for ”inciting hatred” in an address to his supporters; a speech that fell foul of a growing secularist crackdown in the country.

But that didn’t stop the ‘populist colossus’ from grabbing his share of power from the political elites. After freeing from jail, Erdogan co-founded the Justice and Development Party (AKP) in 2001. The party claimed a resounding victory in the 2002 parliamentary elections, and Erdogan soon had his power officially restored.

Temelkuran goes on to say that the transformations didn’t happen with a dramatic incident but through numerous seemingly insignificant attacks on democracy.

“I guess it is because of two World War movies people imagine fascism something like Jaws swallowing the entire democracy in one bite. Unfortunately, it is more like tiny piranhas biting the political establishment and moral codes laboriously day and night,” she said.

“And as a citizen, you don’t realise it too late that all those little bites are actually far more fatal than one big Jaws-bite. And certainly more painful. The process of turning democracy to a dictatorship takes so long that people even forget that’s how democracy looked like in the first place,” the author noted in response to a question on how has Erdogan’s reign been transformed from ‘democracy to dictatorship’.

However, the ‘reformer’ also increasingly became known as an authoritarian leader out to increase the breadth of his power. In 2013, Erdogan imprisoned several senior military officials for life for plotting to overthrow his party, and also ordered the military to crush peaceful demonstrations at Istanbul’s Gezi Park, which killed 22 people and left 5,000 arrested.

Supported by Islamists (both pro-Fethullah Gulen, a close associate of the Turkish president, and pro-Erdogan) prosecutors, security officials and media, the purges gave an opportunity to lower-rank Islamist officers to assume high-ranking military positions. They were seen as a bid by Turkey’s civilian leaders under President Erdogan to establish dominance over the military.

“Putting journalists and journalism on the target is not an impulsive action from leaders who have dictatorial inclinations. Because once you handle the news it is extremely easy to shape the truth and reshape it again according to the dictator’s likings. Therefore oppression of press is not only a freedom of expression issue but it is also a moral and political tool to control the minds of the people. Once you have the power to play with the truth you can drive a country completely crazy,” Temelkuran said.

But Erdogan’s animosity toward his enemies was deepening during this time.

He also alienated minorities, such as the Kurds, after escalating military conflict with the Kurdistan Workers’ Party that led to an armed insurgency for self-rule in Turkey’s southeast for more than three decades.

Yet he remains deeply popular, despite the two-year state of emergency imposed after the failed coup and the more than 160,000 members of the judiciary, academics, teachers and civil servants who lost their job in post-coup attempt purges.

Tags:
Previous Article
How Turkey dumped ‘no problems with neighbors’ policy
Next Article
The Turkey-Russia Tango Over Syria and Libya