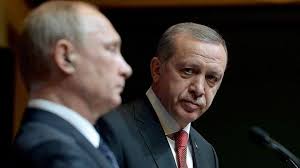 Developments in Syria’s northern Idlib region have put Turkey’s President in a tight corner, perhaps the tightest since he first hijacked state power ten or more years ago. Upwards of a million refugees, purged by Assadist forces operating under Russian air support, are stumbling northwards toward the Turkish border. The border is closed. But you can’t keep a million starved, frozen, desperate refugees out by main force. Turkey already houses over three million Syrian refugees and the country’s native inhabitants have had enough. The resentment of Turkish citizens threatens to derail Erdogan’s grip on power.

Ergodan sent in the Turkish army, with tanks, artillery and armored vehicles, long-range rockets in tow. But they have no protection from Russian air power. A nation with a long militaristic history like Turkey can endure battlefield martyrs, inflows of refugees, curbs on freedoms and strongman posturing in its leader, up to a point. What it won’t tolerate is defeat, especially defeat that a supine media can’t hide from the populace. Plus, the collapse of Ankara-backed Sunni rebels in Syria will free the Kurds to unite geographically along Turkey’s southern border thereby furnish support to fellow Kurds inside Turkey. An even bigger blow. So Erdogan abuts a Waterloo moment. He is asking Nato desperately for Patriot air cover from Russian airstrikes against Turkish soldiers. Having spurned Nato and the West, having defiantly purchased Russian missile batteries, Erdogan has run out of bluffing room on both sides.

This happened once before in 2015 when his air force shot down a Russian SU-24 fighter-bomber as it curved around in Turkish air space to attack anti-Assad rebels from the rear – meaning Turkmen tribes in Syria armed by Ankara to act as support for weapons and jihadis crossing the border from Turkey. Erdogan begged Nato for Patriot missiles then. Neither Nato nor the US wanted to empower Erdogan further or confront Russia over a conflict beyond Nato’s remit. He didn’t get the missiles then. He’s unlikely to get use of them now – unless he makes massive concessions. What would that look like? Whatever the short-term concessions (return Moscow’s S-400 missiles and stop the Russian gas pipeline for a start) the ultimate aim would be his departure from power. So, on all fronts he faces termination.

The great incalculable here is Donald Trump. He could impulsively help Erdogan. The latest unconfirmed news I’ve heard from Turkish journo contacts is that Patriot batteries have already landed at Nato’s Incirlik Airbase. If so, it might be an initial gesture that goes nowhere after dense negotiation. American soldiers are unlikely to fire them in battle against Russians and the training of Turks will take time. We don’t know the diplomatic pre-conditions for their use – what hoops Erdogan needs to jump through before he gets to man them. We don’t know if it’s Trump or the Pentagon or Nato who made the decision. Trump may feel that this is no time to show public weakness in confronting the Russians, especially in the pre-election months of heightened scrutiny. But he has, in the past, made the anti-Moscow weapons gesture but held back the final key to deployment. As in Ukraine. Without Trump, history indicates that Erdogan would b

I wrote in this column before that Erdogan’s lust for Russian-made air defenses likely derived from his distrust of his own military. The army he decapitated with faux-trials then kept busy with Syria. The navy can’t touch him internally. But the air force posed a critical problem. Its officers get western education and training, and tend to espouse Western democratic values. During the suspiciously ramshackle 2016 coup attempt by the military, Erdogan mobilized supporters against tanks and soldiers but couldn’t contain the marauding jets of his own air force. He concluded that the West wasn’t his ally on the road to despotism, therefore he probably felt he needed Russian missiles to defend against Nato-made jets manned by mutinous pilots. Moscow’s S-400 missile system inevitably meant Russian trainers and observers and a rival anti-Nato officer bloc within the Turkish air force. It also meant that Moscow would learn how to shoot down Turkey’s, therefore Nato’s, warplanes. So Washington stopped military co-operation with Ankara.

During the Ottoman centuries of retreat and decline, the Sublime Porte retained global leverage by playing off the Great Powers – the Czar, the Kaiser, France, Britain et al – against each other. In his neo-Ottoman delusions Erdogan believed he could adopt similar tactics by juggling alliances. But it won’t work for him. The West that he likes to annoy so much still has some need to uphold Nato’s eastern flank if only to insulate Europe from mideast chaos. To some degree Europeans care what happens to Turkey. The Russians don’t. For them, a pro-Moscow Turkey is great. But a Turkey destabilized is just as good, maybe better – no threat to Syria, no more Nato flank. Putin never ends a smoldering conflict if there’s still leverage to be gained. As yet, the Kremlin has no reason to play nice with a recalcitrant Erdogan. So the Russia option, as Turkey’s President is just discovering, was never a haven.