Cases in Turkey are rising rapidly: Corona-Ignorant Erdogan with the decree for Chaos

Cases in Turkey are rising rapidly: Corona-Ignorant Erdogan with the decree for Chaos 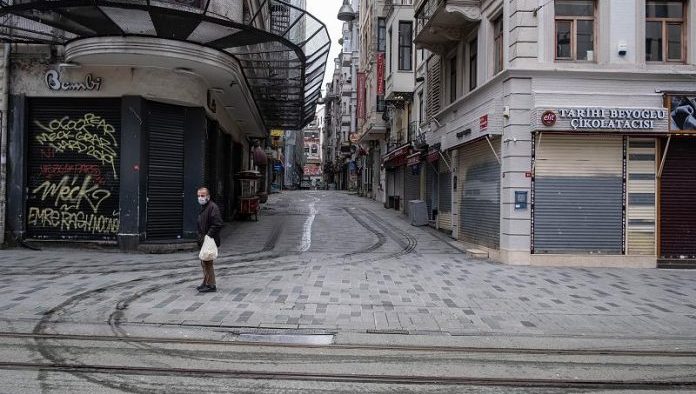 The Turkish government has imposed because of the Corona-crisis for this weekend in the short term, output restrictions in 31 cities. This also applies to the country’s largest city, the metropolis of Istanbul, such as provincial Governor Ali Yerlikaya confirmed late on Friday evening in a Tweet.

Because the measure was only announced just two hours in advance, set in Istanbul, immediately panic purchases. In supermarkets, bakeries and neighbourhood shops and queues formed. She had not expected such a measure, said the Istanbulerin Simona Hayrabe to the AFP news agency. “But it came so suddenly.”

Details and exceptions to the prohibition in Turkey leaked to. A Tweet from the Interior Ministry, according to the capital, Ankara, as well as the cities of Izmir and Antalya are affected. The ban should, therefore, apply from midnight on Saturday until midnight on Sunday night.

The opposition mayor of Istanbul, Ekrem imamoğlu, criticized the short notice, communicated measure. He didn’t know anything about the curfew, said imamoğlu in a Video message. “We were not informed,” said the mayor. “We don’t even know what kind of services can we offer tomorrow in Istanbul.”

interior Minister Süleyman Soylu, the state news Agency called Anadolu that to rest. There is no reason for panic purchases, among other things, would be open on Saturday, the bakeries, which are likely to deliver their Goods then. Anadolu also found in clinics, pharmacies and institutions offering certain public services are to remain open. Also, journalists are likely to move in the curfew freer.

All of the latest developments to the outbreak of the Coronavirus, you can find in the News Ticker.

Turkey had reinforced the measures to contain the Coronavirus and curfews for under-20-Year-old and people over 65 are arranged, as well as several places under quarantine. In the fight against the spread of the virus, the authorities had also closed the schools, international flights suspended and community prayers and gatherings prohibited.

Turkey is one of the countries with the largest increase in the number of new infections in the world. According to official figures, have been registered until Saturday, more than 47,000 cases of infection, 1006 people were killed across the country.

The epicentre of the Turkish Corona-crisis in the metropolis of Istanbul is there, the beds in intensive care units are now in short supply. “In Istanbul, there are 4600 intensive care beds, and in only two to three days, were already occupied 80 percent thereof”, said the head of the Turkish Medical Association TTB, Sinan Adiyaman, the German press Agency. “This was communicated to us. And that will increase.“

“We see that we were very unprepared,”

The President Erdogan announced the construction of two other hospitals within 45 days of Adiyaman said that it would have been good if this had been planned at the beginning of February. “Then you would be ready now.” He criticised the fact that Turkey had a late and inadequately reacts to the Corona-crisis. “We are now in the fourth week, and see that we were very unprepared.”

The medical Association TTB had doubts this week the number of officially recorded deaths is attached. In a statement, it said it was “striking” that the number of Covid-19-followed by the rise of cases the graphics of the death cases, but the course accordingly.

so Far, the death of patients who were tested negative, the computed tomography was positive – that is, compatible with the disease Covid-19 – as a natural death, death would be noted “as a result of an infectious disease or a viral pneumonia,” said Adiyaman. The WHO have arranged for such cases, the Code for “probably Covid-19” indicate. Turkey does not want to use yet. “Of course the Numbers are higher than indicated,” said Adiyaman. He did not want to say, however, that is intentionally going to hide.

criticism of the crisis management of the President Erdogan is yet to hear rarely. But that is also due to the fact that the Turkish government is going hard against a lot of what could be construed as criticism. As the well-known Turkish TV presenter Fatih Portakal had blasphemed about a proposed fundraising campaign of the Turkish government, fluttered it immediately for a display by Erdogan in the house: insulting the President. Uncredited/Turkish Presidency/Reuters Turkish President Recep Tayyip Erdogan at the end of March with a video conference with his Ministers.

The Turkish economy was already in front of the Coronavirus in the crisis, the unemployment rate was in December at 13.2 percent. The important part of the tourist industry, the product accounts for five percent of the gross social, will probably be up in the high summer broke. In the case of small and medium-sized enterprises, experts fear a surge of bankruptcies, the numerous day laborers in the Land of the wage breaks away, to have no claim to social benefits.