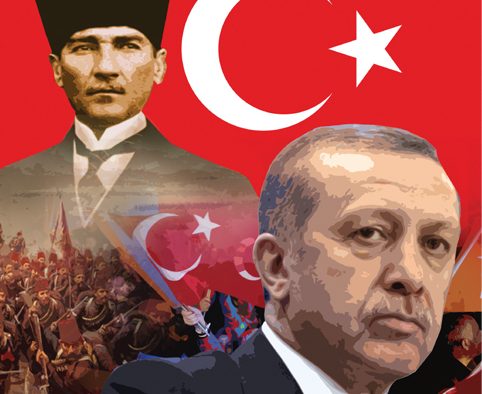 I doubt this is the most ideal introduction.  However, when the subject is the Turkish political culture, it is impossible to stay away from the ‘multiple rulers’ concept. After all, such multiple rulers existed during the European feudalism era. The emperor, king, Catholic Church and its cardinals together with its local authorities, feudal princes, lords, and landowners were all a part of this ‘multiple rulers’ concept. The most important development of this era was secularization. The differences between the tyrant practices of the Catholic Church in Medieval Europe and the practices of Jesus and his apostles in the Bible came to light when the German pastor Martin Luther translated the Latin Bible into German. This ignited the first fire of protests against the oppression of the Church. Theologists who wanted to purify Christianity developed a new interpretation of the religion that centralized the teaching of Jesus and the Bible (New Testament). In fact, this eventually ended up being a product of different interpretations. In other words, it did not have majorities at heart, but only pluralism. The Catholic Church took a very harsh stance against this situation. War was inevitable at this point. The religious wars were the bloodiest wars in European history. The fight between Catholicism and Protestantism formed the essence of these battles.

In the end, Protestantism was officially recognized by force of the Peace of Augsburg in 1555. Plus, the Peace of Westphalia signed in 1648 limited the political power possessed by the Catholic Church and this gave birth to the centralized territorial states. The multiple stakeholders of the power in Feudalism transferred their powers to these centralized states. Nevertheless, they still existed and took part in the balance of power. This is how the majority rule came into the picture in Europe.

What about the situation in the east? Well, the east was basically us. I think I do not need to say this, but nevertheless I will and carry on as follows; first and above all, the Church and the mosque were not the same things. They are still not. I can feel some of my impatient and uninformed readers (no offense) will object: “We already know this. Of course, one of them is the name of the place of worship for the Christians, while the other one is for the Muslims!” But my careful readers have already realized that I have capitalized the first letter of the Church, but the first letter of the mosque is not capitalized. No, this is not a typo. And yes, this is very related to our subject! This is not even a tiny detail or something because this is the core of the whole matter! Wait, let me explain.

The Church is not a concrete building, it represents an organization. However, a mosque is a building. But of course, a church is a building too. The people gather and worship there. That is its function. However, the Church, which must be written in capital letters, is a hierarchically organized institution. It is an organization where there are institutional and formal relations. However, there is no organization concerning the mosque in Islam. The mosque is built by the state or the rich, and eventually, it is only a concrete building. An imam and a muezzin are present inside the building. But the state or the jamaat appoints or assigns them. This situation prevented religion to become an autonomous authority. And this made it passive. But against who? Of course, against the state!

Islam was born as a state as well as a religion. I am talking about a centralistic eastern state model where there is only one authority (prophet or caliph, and then the sultan). The political authority controlled the religion in general in this model. While this political authority collected legitimacy from the religion, it could not possibly oppose it. The whole religious organization such as the construction of madrasahs or mosques and the matters concerning their operation (maintenance etc.) were dependant on the political power. Therefore, any kind of discrimination and also autonomy were out of the question. Thus, religious figures depend on political figures. Moreover, the mosque has never been able to be in a Church-like organization for this particular reason. It always remained stump. The ulama always felt the mace and sword of the ruler on top of their head. There was a state that controlled the religion in the Ottoman Empire. It was out of the question for the Shaykh al-Islam to oppose the sultan. Besides, it was impossible to become a Shaykh al-Islam independently of the sultan. There were bargains of course and balances of power, but they were never institutional! This is the most important thing. Institutionalization! The Church in the West became an institutional autonomous powerhouse for this particular reason. However, religion has always existed behind the shadow of politics; just like an instrument and part of it under its control and tyranny. The fact that Islam was born as a state religion (evolving Arabs into an Arabic-Islamic empire after its mission to unite the Arabs) is an important basis for this structure. Thus, the east and west created different cultures on their own. While the Western people produced centralistic political systems that harboured multifarious power elites and balances, the easterners were ruled by a philosophy, which viewed the different power vectors “multiple rulers” and political center as a threat to the government and adopted the idea to destroy the centralists and multifarious power elites.

The relations between the Ottoman Empire and the West deteriorated gradually in modern times (after the 17th century). The West started to come into prominence as the sophisticated side in military, science, education, economy, and administration (bureaucracy), and thus, it was put under the scope by the political elites of the Ottoman Empire! Why did the Ottomans fall behind? How could they compensate? This resulted in some reforms. Let us remember that the Ottoman Empire was the most important and perhaps the only power in the Islamic world during this period. Therefore, I think understanding these reflexes is not only a key to understand the history of Turkey, but also essential to understand the sociology and history of Islam. In this regard, the reforms made in the Ottoman Empire is very important for the entire Islamic culture.

Therefore, a gradually transforming model came into existence. However, the problem was that the historical and sociological dynamics in the West were different. The reforms in the Ottoman Empire were not successful for this reason. They started from the surface and then they were forced to go deeper. First, they wanted to remain only in the technical field. Because they were afraid to lose the purity of their religion once they get into the sociological field. However, they soon realized that it will not be enough to improve the military only. Therefore, a new reform process that focused on education was started. This situation started affecting the elites’ way of thinking and their world of values. The circle of the reform expanded gradually. This circle flexed, expanded, or completely broke the cultural and sociologic boundaries of Islam whenever it encountered them. For example, jurisprudence has gone beyond Islamic norms such as giving non-Muslims intercitizenship. In other words, breaking points emerged. Two worlds clashed like in the egg tapping game; the Western political culture started penetrating and even attacking the Islamic political culture. This was not a solid power struggle. The soft power established on the stiff power of the West clearly made the West superior. J. Nye’s Soft Power concept is a great source for further information on this matter.

It is time to go to the crux of the matter.

Serious contradictions emerged when the democratic ideas were being applied in the Ottoman Empire and the Republic of Turkey due to the fact that the pluralist institutionalization in the West did not manage to sprout in the Ottoman Empire (and the Islamic world). For instance, let’s think about the political parties. The idea of a political party originated entirely from the pluralistic political culture of the West. Whereas in the Ottoman Empire, such differences were regarded as the source of trouble. The traditions are quite different in this regard. The plural power balances and institutionalized power elites which have a very deep-rooted tradition in the West and the blessed singular power in the east gave birth to political cultures that are completely poles apart. The culture of consensus built on these values of the West was stepping into the east, into the Ottoman countries. However, what was needed to be a consensus? First of all, there should be a relationship of equality between the stakeholders! In other words; (i) the law should be binding for the power in the country (equality before the law), and (ii) different power elites being accepted as legitimate and legal! Now, this is certainly not a sociological equation to be solved overnight by simply translating any Western constitution promoted with “let’s found a party!” or “let’s make all citizens equal!” chants. This is exactly a field of association between political cultures as a tradition that has no history, sociological or political reference and custom about this matter on one side, and the institutions that are accepted, traditionally accustomed, settled, and very complicated on the other side.

Why does the tyranny of the majority reigns today in Turkey and not pluralism? This is the core of the matter! In fact, there has never been a pluralistic political environment neither throughout the history of Turkey nor the Ottoman Empire. There has always been a political race that resulted in domination. In other words, the purpose of the political struggle was “eliminating the enemy” and “preventing multiple rulers”. This is more than just a simple misunderstanding; it is the consequence of cultural codes. Political culture focuses constantly on degrading the pluralistic structures to single ones. Because all of the states throughout the history of Islam tried to do this. Thus, regardless of who comes to power, the result is always strengthening singularity; pluralistic structures are losing their autonomies, and eventually, they accept (submit to) the unconditional rule of the centralized government. That is exactly why the state has always a permanent ideology! Or that is why the state bureaucracy always hires the same type of people and tries to standardize itself!

Here is my main point (or the basic thesis); decentralization is not just about the state, on the contrary, it is a sociological (communal) matter. The key area here is the political culture. One of the most important matters faced by the politics of modern Turkey and broadly Islam today is the resolution of this problem. Because all of the political modernization efforts will always end up in the same conclusion without providing a resolution to this matter. And there will never be a happy ending.

Dr. Caman has been working at the Political Science Department of Memorial University of Newfoundland (MUN) since 2015.

The original version of this article first published in Turkish at tr724.com.