With assault on Iraq, Turkey and Iran cement a partnership in crime

With assault on Iraq, Turkey and Iran cement a partnership in crime 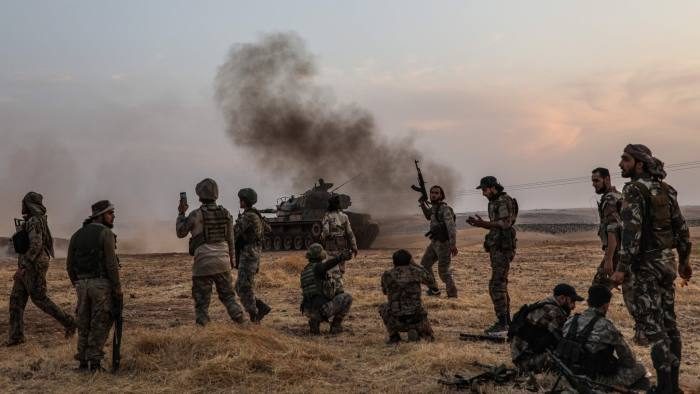 MISSOURI, USA: Over the past 10 days, Turkey and Iran have launched a series of apparently coordinated air strikes and artillery barrages on Kurdish targets in northern Iraq.

The strikes included attacks on areas at the Iraqi-Turkish border, where Kurdistan Workers’ Party (PKK) militants remain active; Yazidi areas near Sinjar on the Iraqi-Syrian border; and areas on the Iraqi-Iranian border, where the PKK and a number of other Iranian Kurdish opposition groups have a presence.

International law appears to be of very limited use here. Both Turkey and Iran claim they are engaged in legitimate self-defense against Kurdish parties launching incursions against them from Iraqi Kurdistan.

Turkey in particular blames the PKK for a series of recent bombings in areas of predominantly Kurdish northern Syria, occupied by Turkish troops.

By contrast, Iraq, Saudi Arabia and the UAE view the strikes as a clear violation of Iraqi sovereignty. From the Arab perspective, Turkey and Iran are brazenly flexing their muscles as if to remind Mustafa Al-Kadhimi, Iraq’s new prime minister, who the real regional powers are.

Iraq and the Kurdistan Regional Government of Iraq simply remain too weak to do anything about the strikes, and the rest of the world appears silent on the issue.

Turkish special forces were airlifted into border areas to conduct ground operations there. For the first time, Turkey also appears to have used its air force to strike Kurdish targets on the Iraqi-Iranian border area of Haji-Omran rather than just the Turkish-Iraqi border.

While used to Iranian shelling, Haji-Omran never fell under Turkish crosshairs before this month. Iran in turn appears to have targeted its artillery at the PKK, which remains Turkey’s primary enemy, rather than just against Iranian-Kurdish parties.

In the Duhok region near the Turkish-Iraqi border, at least four civilians were reportedly killed in the strikes, while other casualty reports trickled in from the Iraqi-Iranian border.

Turkish military officials released a statement claiming to have killed a number of PKK fighters, rather than civilians, in strikes on some 150 different PKK targets.

The Erbil-based news agency Rudaw reports that of the 264 villages in Sidakan district alone, “…118 have been emptied due to Turkish airstrikes and Iranian artillery targeting guerillas of the PKK and other Kurdish insurgent groups.”

Anger over the attacks erupted in Iraqi Kurdistan, and the government in Baghdad lodged protests with both Turkey and Iran over the attacks. But in this part of the Middle East, authoritarian leaders operate with impunity on the principle of “might is right.”

With regular projections of military power and occupation forces in Iraq, Syria, Cyprus and now even Libya, Turkey in particular is intent on throwing its weight around in the region.

Ankara’s message appears to state that it will act forcefully wherever and whenever it wishes, with Turkish naval ships in the Mediterranean now even engaging in brinksmanship over gas deposits there.

Ambiguities in international law notwithstanding, the strikes on Iraq seem unlikely to accomplish anything apart from harming hapless civilians in the area.

Turkey and Iran have been launching attacks on these very mountainous Iraqi-Kurdish border areas for the last 30 years, with little to show for it beyond placating Turkish and Persian nationalist sentiment at home.

Neither Ankara, Tehran nor Iraqi Kurdish authorities can dislodge the PKK and various Iranian-Kurdish opposition groups from such mountainous terrain. The rebel groups will not suddenly surrender and end their campaigns as a result of air strikes and artillery barrages.

In the meantime, local Kurdish farmers and shepherds suffer from being caught in the crossfire of such conflict. Embattled and impoverished Kurds need more than words of support in such circumstances, but little seems forthcoming from the international community.

US President Donald Trump in particular could not care less about such attacks on Kurdish opposition groups. Although many in the Pentagon value a close relationship with the Kurds, they play a limited role in US policymaking, a fact most recently confirmed by Trump’s former National Security Adviser John Bolton in his White House memoir, “The Room Where It Happened.”

During the past year, influential voices within the US Department of State even argued for closer cooperation with Turkey as a means of containing Iran. This likely formed part of President Trump’s logic when he betrayed Syrian Kurdish groups to a Turkish onslaught in October of 2019.

The whole notion of partnering with Turkey to contain Iran appears utterly ridiculous to most informed observers of the region. Turkey and Iran behave as allies more often than not. Turkish officials and business leaders helped Iran evade sanctions for years, and even now Ankara opposes renewed US sanctions on Iran.

One never hears reports of Turkish-Iranian tensions on their mutual border. Turkey and Iran also both appear increasingly beholden to Moscow. As the Arab world saw during the past week, Turkey and Iran even collaborate closely against Kurdish targets in joint military operations.

This leaves only a few differences between Ankara and Tehran, including backing different sides in the Syrian civil war and competing for influence over Iraq (a competition that Iran has largely won).

These are easily manageable within a relationship in which both sides share so much in common, from the increased role of religion in both regimes to their shared antipathy towards the US and the West.

When Turkey was under different leadership before 2002, one might have reasonably considered Ankara as a bulwark to Iranian expansionism. Today, in contrast, they look more like comrades in arms, engaged in a little friendly competition on the side.

One thing about the Iranian-Turkish relationship remains as true now as it did in the past — their shared antipathy to any Kurdish political gains in the region. While Turkey’s anti-Kurdish perspective appears more candid, Iran’s is probably no less strong.

Neither wants their own Kurdish populations to aspire to any sort of autonomy or political and social improvement, which in turn justifies attacks on Kurdish groups in neighboring states as well.

When in October 2017 the Iraqi Kurds held a referendum on independence, for instance, Ankara and Tehran had little trouble speaking with one voice against them.

During the recent Turkish and Iranian strikes on Iraqi Kurdistan, voices in the Arab world were among the only ones speaking out on behalf of Iraq and the Kurds.