The Road to Stability in Syria: Renewing Relations with Kurds

The Road to Stability in Syria: Renewing Relations with Kurds 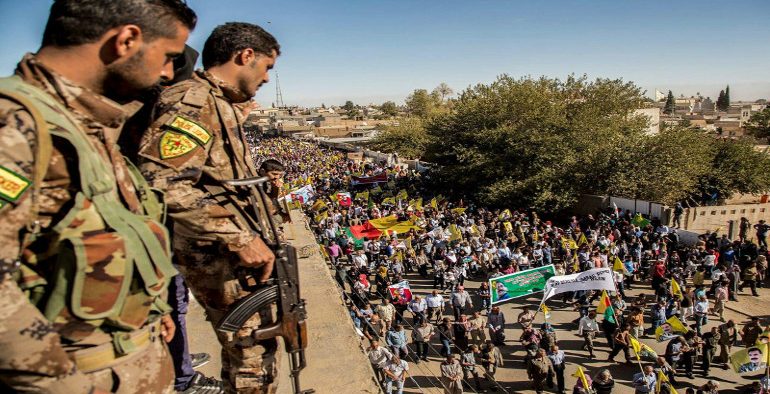 The Assad regime’s presence has led to chaos in Syria. Assad not only brought civil war but allowed Iran to use Syrian territory to bolster its influence. If that wasn’t enough, Russian and Turkish interference expanded, too. Syria—and the entire Middle East—cannot afford to be drawn further towards instability. Peace and stability in the Middle East benefit the United States and our regional allies like Israel. The key to this is re-engagement with the Kurds in Syria.

U.S. engagement with Kurds in Syria is not an endless war strategy. Before the U.S. withdrawal in Syria in October 2019, there were 2,000 U.S. forces based alongside the Kurdish-majority Syrian Democratic Forces (SDF). The Americans had a clear mission; to train, equip, and advise the SDF. The additional role was to patrol the Syrian-Turkish border. This strategy was successful. Daesh (sometimes referred to as ISIS) was losing its strength. 30 percent Syrian territory was out of Assad, Russia, and Iran’s hand, 90 percent of Syria’s oil was under our control. And major agricultural fields and access to the Euphrates River was under our watch.

While today there are 600 US troops in Syria, the effects of the withdrawal are now clear. Bases built by Americans are now overtaken by Russian mercenaries. Turkish backed al Qaeda affiliates threaten the water supplies of civilians. Russian and Syrian forces control major highways that were under American control. Additionally, the humanitarian crisis has worsened. The Syrian Observatory for Human Rights (SOHR) reports of demographic change against the vulnerable Yazidi minorities by Turkish backed factions. In the district of Tal Tamr, NPR reports that Syrian Kurds seek safety from Turkish attacks.

But the United States does not need to re-invest in more troops to balance the power.

Ambassador William Roebuck, the top U.S. diplomat in northern Syria, is mediating talks to unite major Kurdish factions. The goal is to establish a joint civil administration. This would allow Kurds to participate in international peace talks on the ongoing civil war.

Today, our Kurdish allies continue to fight the Daesh terrorists who refuse to lay down arms. Kurds fend off Turkish incursions while attempting to regain lost territories. Kurds protect oil fields in the Euphrates Valley alongside American forces. These are important fights and we cannot give up on our Kurdish alliance.

For stability to return to Syria, the US must, at a minimum, ensure Turkey withdraws its forces. Allowing Turkey to stay only means regimes like Iran also have permission to remain. The U.S. Commission on International Religious Freedom recently released its annual report and called on Washington to “exert significant pressure on Turkey to provide a timeline for its withdrawal from Syria.”

As long as Turkey and its militias remain in Syria, the country will continue to be unstable.

We will also need to hold Daesh terrorists accountable for their crimes against humanity. The United Tates ought to assist the SDF in forming an international tribunal. There is no shortage of evidence that accountability for war crimes leads to peace. The world must prosecute the 10,000 Daesh detainees. This includes 2,000 foreign fighters, 800 of whom are Europeans. The lack of international accountability led to riots in prisons. Daesh detainees briefly controlled the largest prison in Hassakah. The Pentagon inspector general warned of a “high-impact risk of a mass breakout” by Daesh prisoners.

If the Kurds do not receive support, Daesh will once again threaten Europe and the United States. For our national security and stability in the Middle East, the United States must fully engage with Kurds in Syria.

Diliman Abdulkader is the co-founder and spokesman for American Friends of Kurdistan, a Washington-based advocacy and education organization working to strengthen American-Kurdish relations.

Tags:
Previous Article
Bolton says Trump proposal to intervene in SDNY investigation of Turkish bank felt ‘like obstruction of justice to me
Next Article
With assault on Iraq, Turkey and Iran cement a partnership in crime

With assault on Iraq, Turkey and Iran cement a partnership in crime
NAT 22nd June 2020
Submit an Op-Ed
Tweets by NewsAboutTurke1