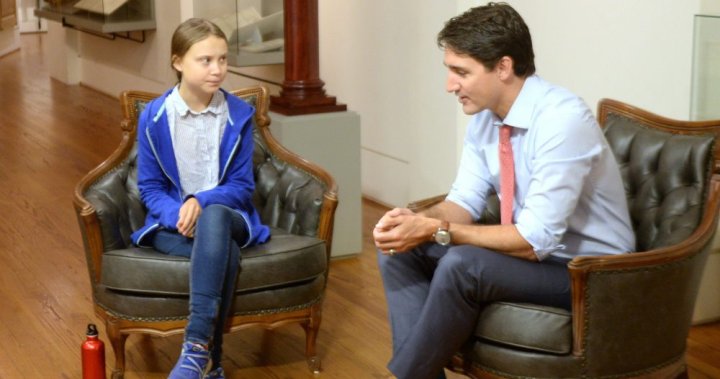 That wasn’t your friend, buddy.

Prime Minister Justin Trudeau spent over 10 minutes on the phone with Russian pranksters in January, when they used a bot to pose as Swedish climate activist Greta Thunberg.

Russian comedy duo Vovan and Lexus, a.k.a. Vladimir Kuznetsov and Alexey Stolyarov, posted audio from the call online this week, in their latest successful prank on a celebrity figure. The comedians have pulled similar stunts with Prince Harry, U.S. vice president-elect Kamala Harris and actor Joaquin Phoenix in the past.

The fake Thunberg asked Trudeau about a wide range of topics, including the Iran plane crash, U.S. President Donald Trump, NATO and Prince Harry’s relationship with Meghan Markle. “She” also repeatedly asked Trudeau about Terrance and Phillip, the Canadian cartoon characters from the show South Park.

The PM eventually clued into the South Park reference and ended the call.

The Prime Minister’s Office (PMO) tells Global News that the prank happened in January, shortly after Ukraine Airlines Flight 752 crashed in Iran. Many world leaders were reaching out to Trudeau at the time to offer their condolences over the 85 Canadians who died in the crash, the PMO says.

“The Prime Minister determined the call was fake and promptly ended it,” a PMO spokesperson said. He added that Trudeau is not the only world leader to be targeted by these pranksters.

In the audio recording, the fake Thunberg says she’s concerned that the Iran incident will lead to a “Third World War.” She then tries to bait Trudeau into saying something about Trump, who she describes as the “main bastard” who is “doing everything to kill us.”

“I understand your words,” Trudeau says. “My responsibility is to work with the world leaders that other people choose … I can certainly understand that people feel very, very strongly about him.”

The Russian pranksters complain about NATO in the call and urge Trudeau to abandon the alliance, which was formed in part to deter Russia’s international ambitions.

“I also dream of a world in which soldiers are not necessary, but we don’t live in that world yet, unfortunately,” Trudeau says. “It does take people to push back against those who would harm innocents.”

The PM thanked “Thunberg” on the call for her visit to Montreal last year, saying that it helped shape the conversation during the last federal election.

The pranksters tried to convince Trudeau to join a vague “club” of world leaders, but he refused to do so without further details.

They also tried to draw him out on Prince Harry and Markle, who were in the process of leaving the Royal Family at the time.

“I sometimes think that his wife manipulates him,” the fake Thunberg says on the call.

“I think in every relationship there are complicated concessions and compromises that are the art of living together,” Trudeau responds. “I have met Meghan a few times and she’s always been lovely.”

He adds that the couple seemed to be acting in the best interests of their family, including their newborn son Archie.

Harry, Markle and their son eventually settled in California after spending a few months in Canada.

The fake Thunberg name-drops Terrance and Phillip a few times throughout the call, but she gives away the prank when she brings them up again around the 10-minute mark.

“By the way Mr. Prime Minister, can you introduce me to Terrance and Phillip? I know that they are big stars in Canada,” she says.

Trudeau initially says he will ask his team to connect Thunberg to the comedy duo.

“Oh, that’s nice, so you can introduce me to Terrance and Phillip?” she says.

“Wait,” Trudeau says. “Terrance and Phillip — were they not in South Park? … I believe they are South Park parodies of Canadians.”

The PM then politely ends the call.