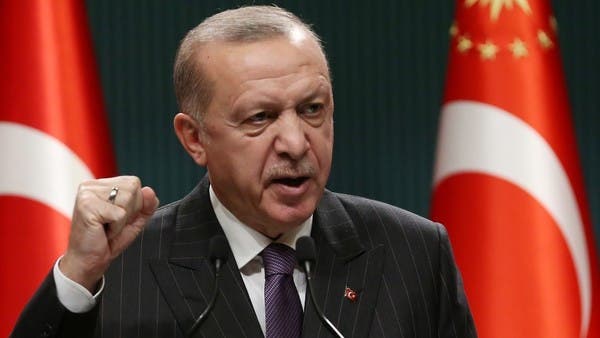 The European Court of Human Rights said Tuesday that Turkey violated a British artist’s freedom of speech by convicting him of “insulting” Recep Tayyip Erdogan when he was prime minister.

It was one of several incidents that have raised alarm over a crackdown on individual rights under Erdogan, who became president in 2004.

Michael Dickinson had been living in Turkey for some 20 years when he took part in a 2006 protest against the government’s support for the US war in Iraq.

He showed a collage with Erdogan’s head attached to the body of a dog held by a leash in the colors of the American flag, prompting an inquiry and trial where he again displayed the work, landing him several days in jail.

Initially Dickinson was acquitted, but in 2009 the ruling was overturned, and the following year he was ordered to pay a fine of around 3,000 euros ($3,600) for what the court termed an attack on Erdogan’s honor.

“I was only making a political statement which people should be allowed to do,” he told AFP after the ruling.

He took his case to the ECHR, based in Strasbourg, eastern France, where judges ordered Turkey to pay him 2,000 euros in damages in a unanimous ruling.

But according to British press reports quoting friends, Dickinson died in July 2020 in London from peritonitis.

No contact information was available on his purported website, titled “Yabanji,” which shows photos of Dickinson and his work, including what he terms “My Criminal Collage” depicting Erdogan.

I could hear the screams of tortured detainees, former bureaucrat says
NAT 3rd February 2021
Submit an Op-Ed
Tweets by NewsAboutTurke1