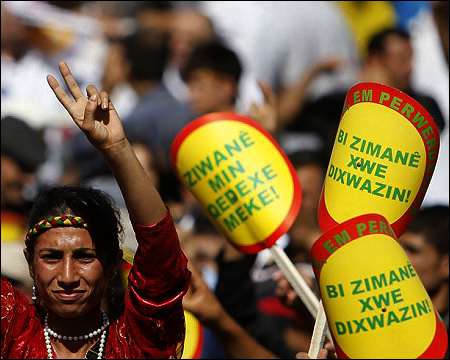 JIHADISTS kidnapped a Yazidi woman from Afrin in northern Syria and took her to Turkey, where she has been beaten and tortured while in prison, human rights campaigners said on Wednesday.

Ghazala Mannan Salmo was abducted by Faylaq al-Sham mercenaries last week from the Yazidi village of Basufan in the Sherawa district, the Human Rights Organisation of Afrin reported.

Also taken were Kurds from the villages of Baiyeh, Basofan, Kabashin and Burj Haydar. They are accused of planting a car bomb that killed the Islamist leader of the al-Hamza Brigade last December.

The militia was responsible for kidnapping hundreds of Yazidi and Kurdish women and holding them in torture camps, as reported extensively by the Morning Star.

Footage posted on social media showed the women being tortured and stripped naked in the camps and there were allegations of rape and sexual abuse.

Ms Salmo, a mother of six, was brutally beaten and tortured following her abduction, which has caused severe psychological damage, according to a source in Isca prison where she was held.

The source said that Ms Salmo has recently been handed over to Turkey for trial on terrorism charges.

Tags:
Previous Article
Close to 10,000 people pushed back to Turkey by Greek coastguard and Frontex, activists allege
Next Article
What’s next for Turkey in Libya after election of new interim leaders?

U.S. carries out airstrikes against Iranian-backed militia facilities in Syria

What’s next for Turkey in Libya after election of new interim leaders?
NAT 12th February 2021
Submit an Op-Ed
Tweets by NewsAboutTurke1